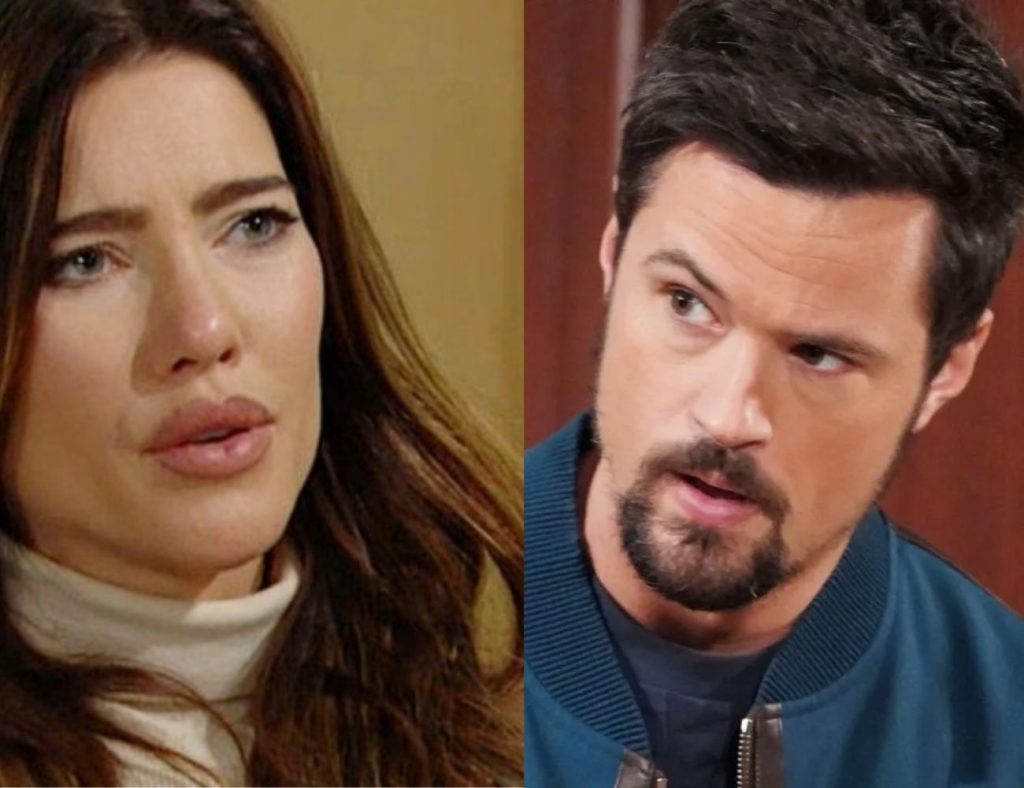 The Bold And The Beautiful: Steffy Takes Douglas Away From Thomas, Way To Pay For His Deeds

Steffy and Douglas were being quite a brother-sister duo on The Bold and The Beautiful, with common goals and rotten agendas! However, things changed quickly and dramatically when Steffy stumbled upon Thomas’s CPS call truth. Something Thomas thought he had buried forever! But nothing ever stays buried forever on soaps, right? This revelation exposed not only Thomas’s wrongdoings but also the fact that he is still the same obsessive person who can spiral into a manic rage at any time. Steffy, shocked by the mountain crashing down on her, takes some difficult but required decisions! She exposes Thomas in front of everyone, But will she also take Douglas away from him for being an irresponsible father?

Steffy and Thomas had joined forces on The Bold and The Beautiful to get to a common goal. She was convinced that Thomas is a changed man and has his mind and heart in the right place. Steffy left no chance to gloat about how Thomas was trying to give Douglas. She fully supported Thomas in getting Douglas’s custody. She even tried to make the success of the fashion show all about Thomas, completely sidelining Hope. The brother-sister duo even joined forces to get to a common goal. They both wanted Brooke out of The Forrester hair. Moreover, they wanted their father, Ridge, to be with Taylor.

Steffy did all the meddling that she could in Ridge and Brooke’s relationship to cause trouble. However, that is all she did, but Thomas took matters way too far when he framed Brooke for calling CPS on him on The Bold and The Beautiful. Leading to Ridge feeling betrayed by her and leaving her in favor of Taylor. Not only did Thomas frame Brooke, he even put Douglas in a very traumatic spot, under direct line of questioning from the CPS. Incidents like these could leave a huge negative impact on children, but Thomas didn’t care. When Steffy finds out about the truth, she realizes Thomas still obsesses over things to the point where he is willing to do anything to get to his agenda. Risking his mental health again.

While initially Steffy was all hyped about how wonderful a father Thomas is being to Douglas, the illusion came crashing down on her. When Douglas tells her the truth, she realises that not only is Thomas still being obsessive and impulsive, he is also being a terrible father to Douglas. First, we saw Thomas risking Douglas’ custody on The Bold and the Beautiful. He didn’t care about the emotional scarring the CPS questioning would leave on the child. Secondly, when Douglas confronted him with the CPS recordings, he pressured him to stay shut about him. Not only terrorizing him but also setting a terrible example for him.

All these realizations will lead Steffy to finally accept that Thomas has a long way to recover on The Bold and The Beautiful. Moreover, he is in no way fit to be fathering Douglas at this point. She will support and even encourage Douglas’s return to the cabin with Hope and Liam. After all, whatever Steffy’s issues are with Hope, she really does care for Douglas. She wants the best for the child, and right now, it’s to take him away from Thomas. Thomas, too needs to learn his lessons. Steffy might feel losing Douglas would make Thomas reflect on his actions.

Do you think Thomas would regret what he did after losing Douglas? Or is he beyond repair? Please share your views with us in the comments. Meanwhile, stay tuned to CBS over weekdays to find out what happens next on The Bold and The Beautiful.