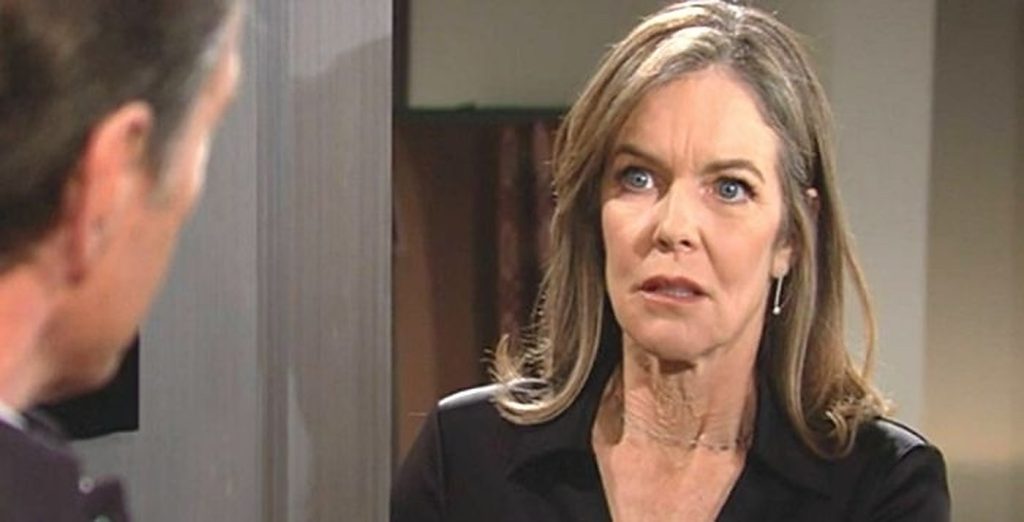 The Young And The Restless: Diane and Kyle’s Budding Bond Takes A Dip, Kyle FIRES Mom After The Truth Expose

The Young And The Restless spoilers suggest that Diane’s past will come to the surface soon. Once Kyle learns about it, he will fire Diane from the family company. With this, it is given that the mother-son duo’s bond will hit rock bottom. Will Diane be able to do some damage control? Let’s discuss how the writers might pan the entire storyline of Diane’s truth expose.

Diane’s Past Coming To Haunt Her

Y&R fans know that with The Young And The Restless and The Bold And The Beautiful crossover, Nikki was able to find dirt on Diane. According to Nikki, she clearly remembers that Diane told everyone about the financial crisis that she faced back in LA. But Deacon will tell her something exactly the opposite to it. Looks like Diane used to have a Bentley, and once, Deacon witnessed a man sitting in the back seats. Even if she had a rich man in her life, something would still not make sense to both of them.

Later, Deacon will provide her with some photos or documents about Diane. Once she gets enough evidence to rip off Diane, she will leave for Genoa City. In GC, Diane will stumble upon someone when she opens her suite’s door. The Young And The Restless preview video showed how anxious and shocked Diane looked when she saw that person. Who could that be? Someone from her past? Chances are high that it is none other than Tucker, Diane’s partner in crime. The one who keeps helping Diane through mysterious text messages.

The Young And The Restless spoilers say that walls are closing in on Diane. Nikki is on the one end coming with some excruciating dirt on Diane, and on the other end is Tucker, who is all set to come to Genoa City. Not to mention, Phyllis has already confronted Diane in front of Jack with some past dirt. Now what? What will happen once Diane is exposed? The progression she made with Jack and Kyle will certainly come to an end.

The Young And The Restless Spoilers: The Aftermath Of The Expose– Kyle Fires His Mother?

Well, something will undoubtedly happen once Diane’s façade has crumbled, that is, feeling betrayed! Yes, after causing so much chaos, it was difficult for Jack and Kyle to accept Diane back in their lives. Even though they were just making small progressions, the fact that both of them gave her a chance in itself is worth appreciating.

The question is: How will Diane be exposed? Well, till Nikki comes, other drama will take place because of Tucker. Speaking of Tucker, his sudden appearance is going to shake things up in Diane’s life. His history with some people in GC is not good, so this will directly affect Diane’s reputation. Is he doing this on purpose? Well, it looks like such a manipulative person won’t come to visit her without any plan in action. So, what could that be? We will know that.

Once Kyle notices Tucker in Diane’s surroundings, he will wonder what Diane is hiding from them. Ultimately, when Diane isn’t able to tell him the entire truth, Kyle might just fire her from Marchetti. Both Summer and Kyle, they need trustworthy people on board in Marchetti and in their lives.

Long-term fans might remember that it was Diane who left the job earlier. She did not want her son to force himself to fire her, so she quit herself. And now, Kyle will take the initiative to fire his own mother. However, chances are that Diane might do some serious damage control in the future to regain the trust. But for now, all her efforts to bond with her family will get washed away.

We will have to see what happens next. Since Nikki hasn’t come home yet, Diane’s entire plot is not exposed. We will have to wait for Nikki to rip Diane off completely. Y&R spoilers hint that the upcoming episodes are going to be action-packed, so don’t miss it. The Young And The Restless airs every weekday on CBS. For more information on updates and spoilers, visit our website, TV Season & Spoilers.