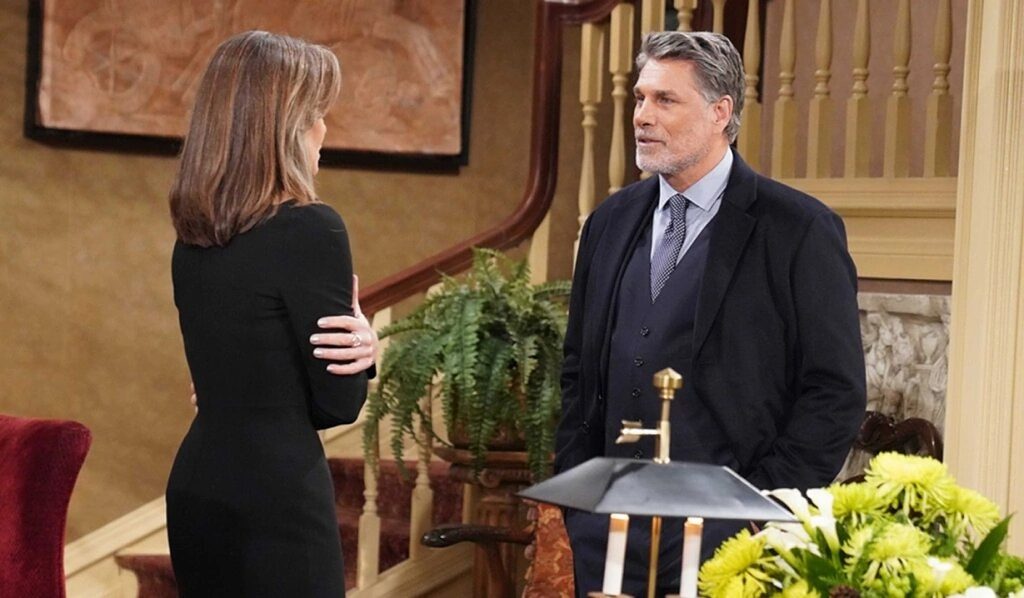 The Young And The Restless Spoilers For The Next Two Weeks (December 26– January 6, 2023): Diane Flirts With Jeremy, Victor’s Evil Move

The Young And The Restless spoilers for the next two weeks from December 26 to January 6, 2023, reveal that Diane will flirt with Jeremy. Her ultimate plan will be to throw him out of the town. Elsewhere, Sally will have something really huge to hide from everyone. Could she be pregnant? Over with Victor, he will question Victoria and Nick’s recent business decisions.

During the week of January 2-6, 2022, Lily and Billy will get worse between Billy and Lily as they think of parting ways. Victor will also have some evil plans to execute and make things difficult for Sally. On the other side, Abby and Devon will surrender to their feelings. Will they make it official? Let’s read further to know what will uncover in the coming weeks.

The Young And The Restless Spoilers For The Week Of December 26-30, 2022: Tucker Kisses Ashley

First, Tucker will wear a Santa hat and deliver some gifts at the Abbott mansion. Traci and Jack fear that Tucker might get Ashley to his side, and it looks like their fears might be coming true. The Young And The Restless spoilers reveal Tucker and Ashley will have some alone time together where he will again talk about his plan and how it is his dream. This is where Tucker will plant a kiss on Ashley, and she will also reciprocate to it. Post this, Tucker will gain some hope and will get more confident.

Elsewhere, Sally will have some really huge secret to hide from everyone. Could she be pregnant? Chances are there. But the question is: Who is the father? Fans know that she slept with both Nick and Adam.  Speaking of Adam, Victor will try his best to convince his son to join the family business again. Given how adamant Adam is, it won’t be that easy for Victor to do that. Whatever the case, Victor might create some situations to make Adam return to Newman Media.

Next, Elena and Abby will try their best to make Nate and Devon come a bit closer and forget about their problems. They will also arrange for a holiday, so we have to see what happens over there. As for Devon, he will regret some business decisions which he made. This could be about the gaming platform dealing with Daniel, which he might think was a wrong step.

Later on, Lily will also have some issues, so that could involve either Daniel’s business rejection decision or either her problem with Billy. Fans know that Lily and Billy are not able to keep up to their promises, especially Billy. The more he gets closer to Chelsea, the more problems arise between him and Lily. Is it their relationship going to end? We will know that soon.

The Young And The Restless Spoilers For The Week Of January 2-6, 2023: Victor’s Evil Move, Abby-Devon Surrender

During the next week, Victor will make some evil plans and will try to throw Sally out of the town. He is done with both of his sons fighting for the same girl. However, if Sally’s pregnancy is real, then Victor won’t realize that he is also throwing his grandchild away from the town. Nevertheless, The Moustache will make plans to get rid of Sally no matter what.

Elsewhere, Jack will come with a bold move to in order to drive Jeremy out of the town

. He has had enough of him posing a threat to his family. So, Jack, Diane, and Kyle will try to plot some plans for that. Over with Lily and Billy, things will get out of hand, and they will much more closer to get a break up. So, we have to wait to see what happens over there.

Finally, Abby and Devon will surrender to their feelings. Since both of them are single, they won’t be able to fight the spark and will surrender. Other spoilers say Abby and Devon will make love again. Chances are there that they both might also make their relationship official soon. Stay tuned for that, as Y&R will air more action-packed episodes in the coming weeks. The Young And The Restless airs every weekdays on CBS. For more updates and spoilers, visit our website, TV Season & Spoilers.