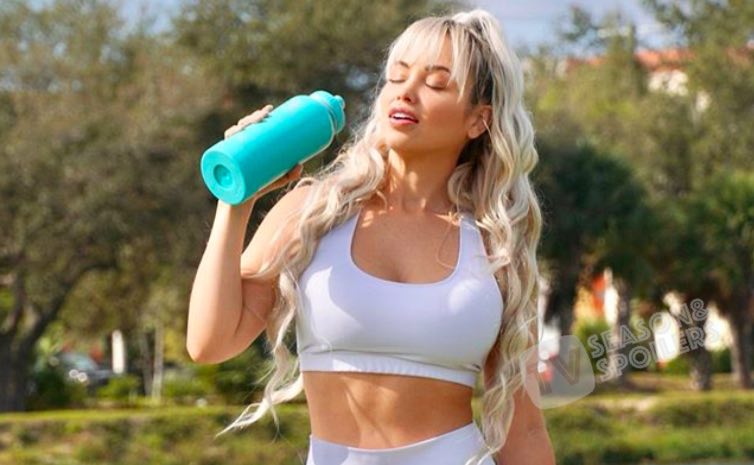 Most reality TV stars don’t shy away from making cryptic posts on social media. It looks like Paola isn’t behind. While fans troll her for posting controversial content, this time she is hinting at a new career direction. Let us take a detailed look at what Paola is trying to convey.

With an edgy outfit and killer abs, Paola rocks funky pink hair in her latest Instagram post. The reality TV star stunningly pulls off a black off-shoulder full sleeves top and shredded jeans. But her hair is not the only part of the picture where the bright pink color is rampant. She captioned the picture saying that she is photoshoot ready and pink is the color of her new career adventure. Wrapping up her words with the sparkling heart emoji 💖, Paola hinted that she is ready to head towards a new career direction. The common assumption states that she might be trying her hand at being a makeup artist.

Whenever Paola posts revealing pictures, trolls come running to criticize her. This time is no different. Even though the amount of hatred is comparatively lesser on this post, the trolls haven’t completely d isappeared. The compliments include every color looks good on her. On the other hand, the sentiment behind the criticism is that she doesn’t really have a class. In addition to that, other comments include that she lacks respect for her little boy.

By now, it’s pretty clear that Paola has a lot going on in her life. According to the majority of fan speculations, Paola must be starting a career doing lashes or as a makeup artist. Besides being a mother to a beautiful little boy, Paola is a career-oriented and active woman. For a while now, we have seen her endorse countless products on Instagram. She also has her own personal training business which seems to be getting off the ground.

The one thing that is clear is that Paola is definitely keeping herself busy thanks to her ambitions. The couple seems to be at a point in their life where stability is not necessarily their friend. But who knows? If Paola’s career as a speculated makeup artist takes off, she might as well improve her family’s lifestyle once and for all. What do you think her new career direction is? Even though carrying a pink suitcase slightly indicates that she might want to be a makeup artist, we don’t know for sure! Let us know what you think in the comments below.