Tracie and Clint have been the most talked about couple on Love After Lockup. Fans have been discussing Tracie’s drug addiction that she proudly flaunts. Clint has not been active on social media. However, fans consider him to be madly in love with Tracie to put up with all the drama. He has been surprisingly quiet about all this. Although he recently took to social media to announce his brand new business venture. Just as this was about to become a hot topic among Love After Lockup fans, Tracie posted a picture that caused a significant stir.

Tracie’s new snap on Instagram has got all fans up on their feet discussing what just happened. As we all know from her earlier posts, she has been flaunting her habit of smoking crack. the reality TV star with baggage is back to pipe again and this time, things seem to get more and worse as time passes. Over the past few months, Tracie’s Instagram pictures show that she is rapidly losing weight. 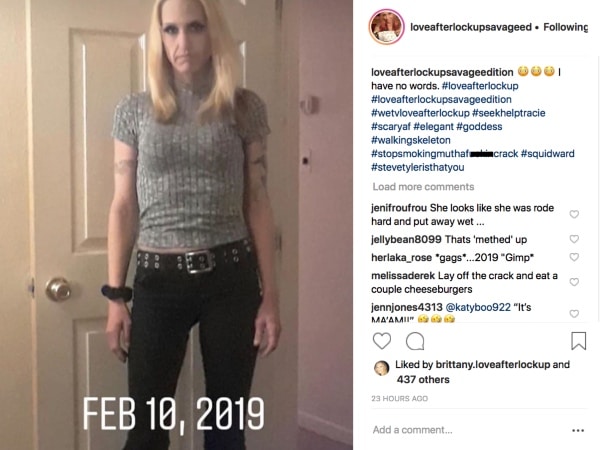 There was a time when she looked healthy. Moreso, some fans also mocked her physical appearance due to the extra weight. But now, the situation is completely different. With each picture, fans can see that she is experiencing drastic negative physical changes. Her recent snapshot has ignited a great level of worry.

She claimed that her weight is 110 pounds now which completely horrified the fans. Viewers are worried about her declining health. Some of them are saying that she looks like a Walking Dead character.

Viewers are confused about why Clint is not speaking up about Tracie anywhere. However, he did mention that he is about to launch a new business on Instagram. His account has only 4000 followers and about 10 posts. The details about the business are still unknown. The post just indicated that something big is coming up.

Even though this is a piece of good news, it hasn’t stopped the haters from doing what they do the best, criticize. They have been busy digging out Clint’s background and posting stuff about his dark past. One of them says that he was somehow involved in the death of his second wife. The claims don’t carry any sort of weight.

Clint’s Mother To The Couple’s Defense

After witnessing the bashing her son is receiving on social media, Clint’s mom buckled up in her son’s defense. She pointed out that all haters could do is hide behind their keyboards. She prays for Clint and Tracie and also for the critiques.

What do you think of Clint’s new business venture? Will the couple’s reputation affect his revenues or will the popularity work in his favor? Meanwhile, Tracie has not taken any measures to improve her situation. Her body is clearly deteriorating. Do you think some kind of intervention is required? If yes, to what extent? Let us know what you think in the comments below.