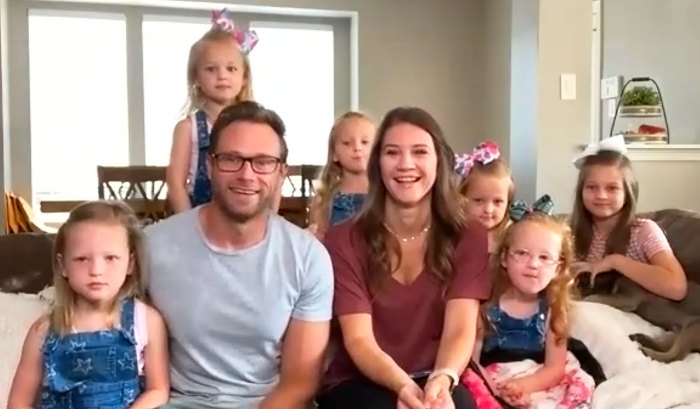 OutDaughtered: Adam Feels Relieved After Kids Off To School, Fans Gush Over How The Quints Look So Tinny In Their Recent Photo

OutDaughtered parents have a hard time bringing up six girls. And with Laura coming in, they have more girls in the house! Adam and Danielle take a very divide and conquer approach to getting things done. Danielle has previously admitted that it’s been crazy to have extra girls. And let’s admit that even Adam is quite overwhelmed with too many females around. So how does the couple go about dealing with the children? Read on!

Recently, Adam Busby took four of their quints and one of their cousins out for shaved ice. He shared an Instagram post capturing the five girls noting that Danielle was busy with shopping. She took Blayke and Olivia long with her. And while the daddy Busby was left back with five girls, he treated them to the shaved ice. Later, he posted the sweet snap of the venture on his Instagram profile. The fans couldn’t stop gushing over the red and blue stained faces.

Fans Gush Over How Tiny And Cute Quints Look!

The fans were thrilled to see the cute picture. They couldn’t stop swooning over how tiny the quints looked in the picture. The photo featured four quints Adam Busby took and their cousin were sitting together in a giant lawn chair. Additionally, the chair was an attraction for Kahuna Joe’s. The fans loved the snap of the girls. They poured their love in the comments as they continued to shower love on them. They found Riley’s face very cute. At the same time, others expressed that they were sorely missing Blayke and Olivia.

Adam’s Girls Are Off To School, He Found His Time!

In another update, Adam shared an Instagram post featuring his face. He seems to be in a thinking mode. Adam wrote in the caption that his six girls are now off to schools five days a week. He further added that this is the time to just get organized with all this new found time! It appears like Adam is adjusting to the new schedule and would ease a bit for some time.

The fans are eagerly waiting for the season of the TLC show. However, there is no confirmed news on the release date of the same. The Busby couple continues to update their fans on Instagram. But fans do not expect to come across some dance artists in their social media pictures! Despite this, Adam and Danielle allow photographs of their production team to slip into their Instagram pictures. These days we can spot a few photobombs every now and then. Does that hint at a possible plotline for season 8? What do you think?