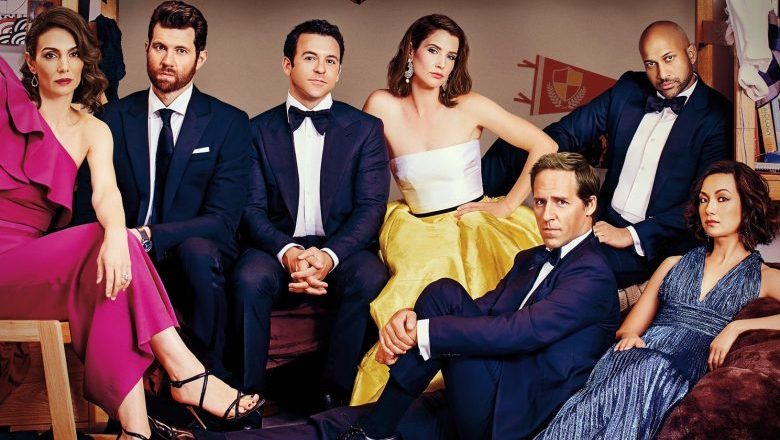 Friends From College Season 3: Why It Got Canceled? Possible Ending

Netflix took several solid risks while releasing the comedy back in 2017. And to be honest, this risk did not turn out to be fruitful for the reputation that the streaming platform currently acquires. Hence, soon after Season 2’s premiere, fans were informed that Friends From College Season 3 would not return to screens. This was truly upsetting for the showrunners as ‘harsh reviews’ caused them to cancel it.
The series was planned to be fun and entertaining as per its genre, but fans disagreed that it lacked both the qualities. Even after receiving poor reviews and performing low, Netflix gave the show a second chance. However, it failed them again and led to its cancellation. Viewers express that creating ‘Friends From College’ wastes the talents of the cast.

As the name suggests, the series is a comical show about some adult friends from college and their messy lives. All of the characters are not very lovable but somehow want us to know that everybody is not perfect in real life. However, its way of creation arises questions on the credibility of each of them. Also, the group’s togetherness is pretty charmless.

Friends From College Season 3: What About The Ending?

The story of the simple show took different turns in the second season. Ethan (Keegan-Michael Key), Sam (Annie Parisse) and Lisa (Cobie Smulders) struggle with their relationships. Lisa is now pregnant with her ex-husband’s child, and Ethan skips his trip with Sam to Paris. Friends From College Season 3 had to answer a lot of questions.
Season 2’s finale was messy and left us with many cliffhangers. Lisa and Nick’s (Nat Faxon) relationship is still complicated, and we yet know its fate. Ethan, Sam and Lisa’s love triangle is still unsolved we don’t who will he end up with. Sadly, as Season 3 has no chances to return on-screen, these doubts will always remain.

The cancellation of the comedy series did not come as a shock to the viewers. As the second season under-performed, fans somehow knew that Season 3 will have to struggle a lot. This proved to be right when its co-creator, Nicholas Stoller, announced the news via Twitter. He slates the show and thanked the audience for watching until now.

Friends from College will not be returning for a third season. Thanks to everyone who watched it. Happy Presidents’ Day!

Fans Are Unhappy And Want More From The Show

Friends From College may have received low ratings and harsh reviews, however, is still loved by many fans around the globe. Some of the fans have even started a petition against the cancellation. After the showrunners slated the show, many followers expressed thier disappointment. Chances are still very low for its comeback, which upsets many binge-watchers online.

Is there a petition? Bring it back!

You’ve got to be kidding me. I just binged this weekend. Haven’t laughed that hard in years. Hope you guys find new network.

With all due respect, Friends From College was a show that may have a place in fans’ hearts. Apart from the reviews, the series was fun to watch and brings much drama to the table. Showrunners Nicholas Stoller and Francesca Delbanco have given several amazing shows, and we look forward to their work in the future. Moreover, we hope that the duo makes more such programmes, that the audience receives better than Friends From College.