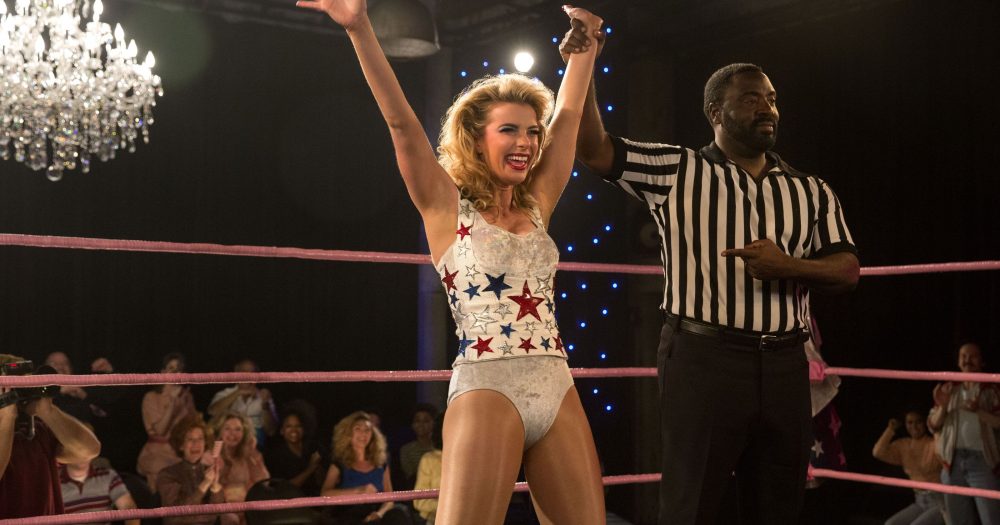 GLOW – Gorgeous Ladies Of Wrestling is one of Netflix’s trump card in the Sitcom genre and seems like Netflix will maintain that. The second season has performed exceptionally well. Therefore, Netflix has renewed the series for another Installment as GLOW Season 3 is on the table.

Did you think we'd GLOW to Vegas without you? Let's do this. 💪 #GLOWS3 pic.twitter.com/tZhWzOJGHu

Plot Of GLOW Season 3 – Sin City, Are You Ready To GLOW?

It is confirmed that the GLOW Season 3 will follow the team going to the Sin City – Vegas. In the finale of the prior season, we saw Ruth and Debbie taking a bus along with the whole team of GLOW heading for Vegas. The latest tweet from the official account of GLOW also quoted – Did you think we would GLOW to Vegas without you. Vegas and Gorgeous Ladies Of Wrestling is one hell of a deadly combination to watch. Therefore the series lands in one of the most awaited series in 2019 on Netflix.
All is not well when we discuss about how the Gorgeous Ladies Of Wrestling is going on. A little feud between Debbie and Ruth is boiling up a little. This might have affected the decision of the existence of the show GLOW on any Network.
In the prior season of GLOW, we saw the ladies fighting up for the survival of their show on the Network. Their show has faced criticism for their sexual content and thus meet the challenge of a change in time slot.
In the finale of the second season of Gorgeous Ladies Of Wrestling, we saw the girls trying to convince another network to pick up GLOW. They advise doing so by putting on an important show that originally highlights the wedlock of Britannica to a fan. However, Bash intrudes and confesses his love for her. Then, Bash and Britannica get married to prevent Britannica from getting deported.

GLOW Season 3 – The Cast For Another Fight In The Ring

No one was eliminated or knocked-out in the prior season of GLOW. Therefore, its’ most likely that the whole cast will return for the 3rd installment of the Gorgeous Ladies Of Wrestling.
So fans will see more of Betty Gilpin as Debbie – Liberty Belle, Alison Brie as Ruth – Zoya the Destroya, Kate Nash as Rhonda ‘Britannica’ Richardson, Britney Young as Carmen – Machu Picchu, Marc Maron as Director of Gorgeous Ladies Of Wrestling’s – Sam Sylvia, Chris Lowell as GLOW’s producer Bash Howard, Ellen Wong as Jenny Chey, and Kia Stevens as Tamme Dawson.

GLOW was renewed for Season 3 in August. The official announcement for the premiere date of GLOW Season 3 is yet to be made. However, the prior two seasons of the series released in June and the same is expected with the GLOW Season 3.