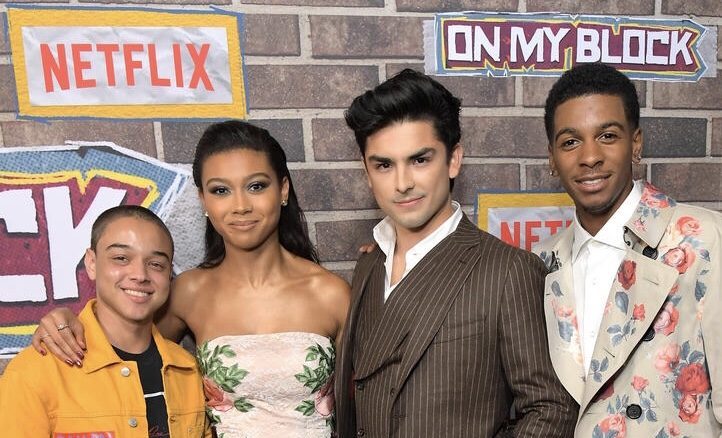 On My Block Season 3: Productions Stalled! But Why? Everything To Know

The second season of premiered with a blast and fans didn’t wait to binge it all at once. It wasn’t long when the demands for On My Block Season 3 started spiraling around the internet. Luckily, Netflix didn’t take longer than a month to renew the fan-favorite series for a third season. The filming had to begin by the Summers. Although none of us have heard of anything about the shooting. Besides, chances suggest that they may not start anytime soon. So, why are the productions stalled?
On My Block debuted back in March 2018 and it instantly became a fan-favorite. The series also became Netflix’s most-binged show of 2018. The second season was also a hit and continued to impress the fans yet again. Audiences were left with a cliffhanger this time again, and there was much buzz about Season 3. The renewal was announced on April 29, 2019, exactly a month after the release of Season 2. Everything was going fine until young cast members decided to ask for pay rises.

Apparently, most of the cast members of any successful show demand for pay raise soon after the release of Season 2. Moreover, many of them were actually got high raises in the salary. Likewise, On My Block actors put up similar requests before beginning the productions for another season. Although, they’re not at fault. The members of the cast, especially the core four, are incredibly talented. Besides, many of the fans online believe that they surely deserve to get higher payroll than they currently receive.
The leads, Sierra Capri, Diego Tinoco, Jason Genao, and Brett Gray were given $20,000 per episode for the first two installments of the show. Despite the success of the series, the actors aren’t getting paid as high as they deserve. On My Block receives remarkably high ratings over Rotten Tomatoes and runs well with critics.


As per a report by Hollywood Reporter, the core four actors are asking for a boost in pay to $1.75 million for On My Block Season 3 entirely. The third season contains eight episodes. The cast members later sought $218,000 per episode, which is ten times higher than what they received for the initial two installments. However, Netflix isn’t ready at the price point, although it has countered by offering $40,000 for an episode.

Actors Of Other Popular Netflix Shows Get Higher Salary

Netflix’s negotiations didn’t work well with On My Block cast members. As per Hollywood Reporter, they have questioned about the much higher pay of the actors of other popular shows on the streamer. 13 Reasons Why has been the most highlighted show in this case.


The ‘supporting’ cast of this teen drama has a higher payroll than any of the OMB character. Each of the supporting characters on 13RW will now get $135,000 for each episode of the 13-episode Season 3. The current amount of 13RW supporting actors’ salary increased after their own negotiations prior to their Season 3. Moreover, it will further be hyped upto $150,000 by Season 4.

On My Block Season 3: Release Date

The productions for On My Block Season 3 are currently held hostage. The delayed filming schedule may largely affect the premiere of the installment. Both the seasons yet have premiered in March, and if everything goes right, the third season may also appear by April 2020.

Alongside the negotiations, it was also reported that 13 Reasons Why is actually much more popular and widespread than On My Block. Although, the latter series has much higher ratings than most of the shows on Netflix and especially more than the former. Besides all the provided reasons, fans hope that the cast members of On My Block Season 3 soon figure out everything with the streaming platform. Moreover, the viewers want the productions to soon begin without any hard feelings.