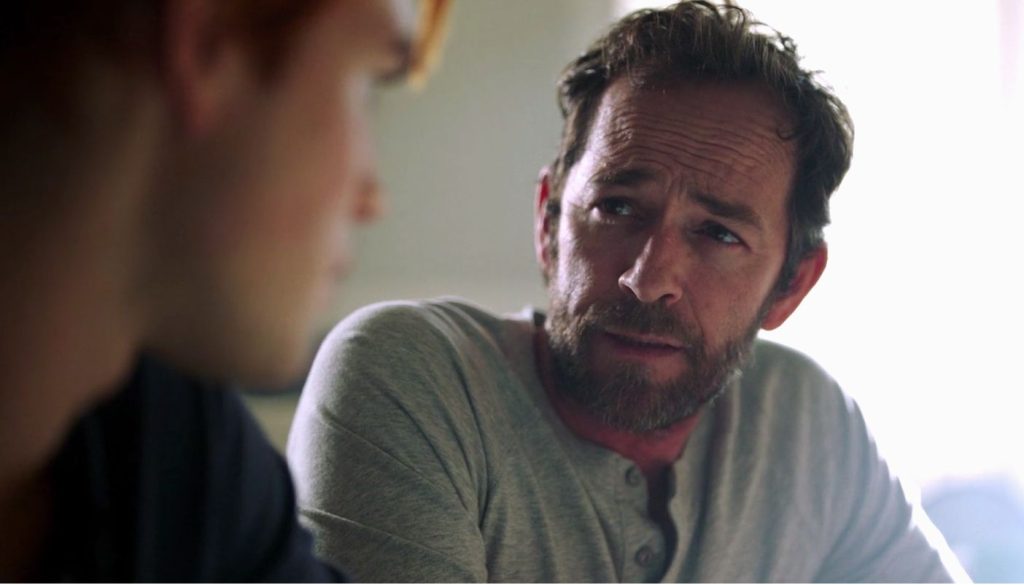 Riverdale Season 3: Will Luke Perry Be Replaced? What's Next For Fred?

‘Riverdale Season 3’ was going fairly well before Luke Perry’s unfortunate demise. He was a prominent character in the show, and the audience had a strong emotional connection with him. The news shook the entire Riverdale cast and crew, and everybody mourned his passing. Fans are now wondering if another actor will replace him as Fred Andrews or will they end Fred’s story on the show.
Riverdale is in the middle of its 22-episode third season. The 14th episode released on March 6, 2019, two days after Luke passed away. The production of Riverdale Season 3 is still in process, and the news came as a shock to everyone. Eight more episodes are yet to telecast. Hence, viewers are now wondering about Fred’s future in the story.

Riverdale Season 3: Will Luke Be Replaced?

Fred was Archie’s (KJ Apa) backbone and his only support. Moreover, Luke and KJ Apa shared the father-son bond in real life as well. Hence, Fred actually seemed like Archie’s father and fans will be disappointed to see another actor playing Luke’s character. The dynamic that the duo had is unmatchable, which makes it difficult to imagine someone replacing him as Fred.

But if the script demands, showrunners will have to cast another actor as Fred Andrews. And if they do, we wonder who that will be. It is difficult to guess of how many episodes will star Luke after his demise. However, as the production of Riverdale Season 3 is still in progress, the recasting may start soon.

Riverdale Season 3: What May Happen To Fred

If not replaced, what will happen to Fred Andrews in the show? Will he pass away in the show as well? Will he leave the town? How will Riverdale cope with the loss? CW and Warner Bros are yet to answer all of such questions.
Fred Andrews’ story can take any turn. We may lose him in the show as well. After fighting the Black Hood and all other dangers, how will the showrunners frame his death? The initial story may be altered to fit this narrative.
On the other hand, fans also sense the possibility that Fred may leave the town and move somewhere else. But the makers will have to come up with a compelling reason to achieve the same. Moreover, many of the fans on Reddit have their different theories predicting Fred’s future in the show. Several of them think that he may leave the town and move with his ex-wife Mary (Molly Ringwald). However, any such assumptions are yet to be confirmed.

Fred Andrews is an integral part of Archie’s life. As his primary parent, Andrews has always been the emotional character who keeps his family above all else. The most recent episode even had a small conversation between the father-son duo that made the viewers very emotional. If the showrunners decide to bring Fred’s story to an end, it will not be easy for Archie Andrews.
https://www.instagram.com/p/BuuvUH9FANt/?utm_source=ig_web_copy_link

Riverdale Season 3: A Tribute To The Legend

Going through pictures on my way to set. From the early days. With Luke in the middle. Our heart, always. Tonight’s episode of #Riverdale finds Fred doing what he does best–helping Archie. It is dedicated to Luke, as all episodes will be for the rest of our run. 💔❤️🏆 pic.twitter.com/Nx8iCFBoMe

Riverdale is one of the most dramatic shows on CW. Also, it manages to connect to the viewers emotionally. The unfortunate event is jarring for everyone, and the ‘Riverdale Season 3’ will struggle to cope with the loss. Luke Perry will always be missed, and we give our condolence to his family and friends.