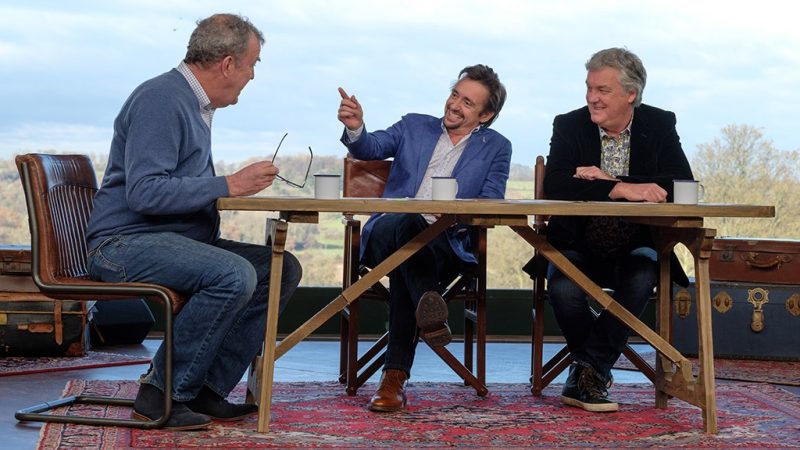 The Grand Tour Season 4: What Jeremy Is Saying? Fate Of The Show? Filming Locations And Release Date

The fans were not sure about the fate of The Grand Tour Season 4, as they had signed only a three-season contract. However, Amazon officially announced the fourth season on December 13, 2018, even before the release of the third season. Clarkson, one of the co-hosts of the show, officially announced the renewal at the final episode of the third season.
The Grand Tour is a British motoring series of Amazon. The show follows a similar format as that of the show, Top Gear. The episodes are hosted by Jeremy Clarkson, Richard Hammond, and James May. The Grand Tour featured a collaboration of live-audience segments and pre-recorded shoots. However, this time, The Grand Tour Season 4 will present the films committed to road trips and adventure specials.

The Grand Tour series brings in a new collection of cars for the fans every week. And all the three hosts state their favorite ones throughout the show. In an interview with Chronicle Herald, Jeremy discussed why he prefers the older cars to the newer models. He differentiated them as new cars tend to blur into one another, they are just 14 feet of a car, and people buy them like wallpaper.

Also, old cars are terrible — noisy, unreliable, drafty and don’t have air conditioning and the steering is heavy, and they ride badly, and they’re not particularly fast. However, an old car will have a personality for sure, and a lot of them do look extremely lovely.
This is one of the reasons why the show features older models of cars rather than the newer ones. James’ also revealed that the car, that he really regret selling was a BMW 3.0 CSL.

Jeremy Wants The Grand Tour To Go On And On

Jeremy Clarkson also expressed his views about the show, when asked how much longer he could present such a physically demanding show. The host answered in a witty was as “How long do I want to keep traveling the world at somebody else’s expense and be paid a fortune to do what I absolutely love doing?” He also added that he could do the show as long as possible, as long as his knees hold out.
He also expressed his concern for The Grand Tour Season 4, regarding his co-hosts Hammond and May, as all of them are also working on their stand-alone shows as well. James has been abroad for his travel series Our Man In…Japan, while Richard has been working on Richard Hammond’s Big for the Discovery Channel.

In the final episode of the third season, Jeremy revealed that he had been working on the fourth season for quite some time. And the trio is reportedly scheduled to start filming the fourth season in June. However, there has not been any update on the beginning of shoot yet.

The fourth season will include Cambodia, Thailand, Laos, Myanmar, Vietnam, Malaysia, and Singapore, as confirmed by Clarkson. The show is also set to mimic the four specials of the third season. It’ll feature the executive producer Andy Wilman describing the Mongolia special of The Grand Tour as “the best episode” of the run.

The third season of the show ended just two months ago. Therefore, it seems that the show will take almost another year to come back on Amazon. The Grand Tour Season 4 will most likely premiere in the first quarter of 2020.