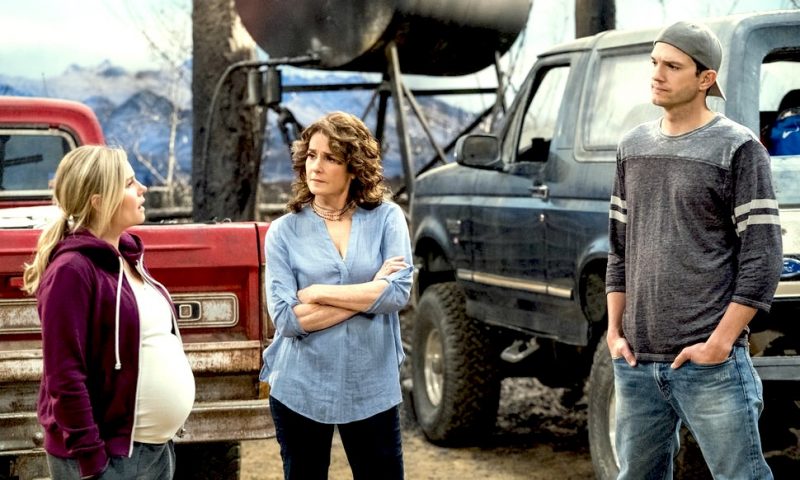 The Ranch part 7 is all ready to hit the screens soon. Part 7 (aka first half of the fourth season) is sadly the beginning of the end. Unfortunately, Season four is the last installment of the American sitcom. The Ashton Kutcher comedy debuted back in 2016, and it is one of the most loved sitcoms on Netflix.
The Ranch is an American sitcom series starring Ashton Kutcher, Elisha Cuthbert, Debra Winger, and Sam Elliot. Each season of the series consists of 20 episodes broken up in two parts; each part contains ten episodes. Netflix renewed the series for the fourth and final season with the series to end in 2020.

The new teaser trailer for The Ranch part 7 recently dropped and it featured some exciting news and spoilers.

Colt Bennett is battling to keep his family together and his business alive in the promo.
Colt reunites with Old Man Peterson. The unwell rancher who sold Colt and Rooster his property back in part 4. He is there to lend an ear to Colt as he details his ongoing troubles. Those include his separation from Abby and his unsteady father-son relationship with Beau.
Meanwhile, cousin Luke elopes with Rooster’s ex-partner Mary. He takes all the money with him that he was planning to use to keep Bennett Brother Ranch from going under. Luke soon returns to Denver, seeking remission from the only family he has.
Moreover, as the trailer suggests, part 7 will follow Beau as he struggles to adjust to semi-retirement. He also struggles with the complications of aging. He eventually offers Colt to be his ranch hand; it is obvious how desperate he is to work again. It looks like Colt would use any help he gets if he wants to compete with Lisa Neumann.

Danny Masterson’s character on The Ranch, Rooster Bennett is long gone. However, his presence is still felt by the viewers of the show. Masterson was fired because of multiple sexual assault allegations. However, his character has stayed part of the show in spirit. The interesting part about the new trailer of The Ranch part 7 is his characters name was mentioned by Colt.

The Ranch faced Rooster’s exit, which was a disappearance turned assumed death. Part 6 of the series was all about family members grappling with the sudden loss.
However, off-screen, the scandal was full of controversy. Despite fan backlash, Netflix eventually decided to fire Masterson. He has yet to be charged with a crime as the investigation is still ongoing.

The Ranch Adds Another “That 70s Show” Star To The Cast

If you love The Ranch and That 70s Show, then this news will surely bring a smile on your face.
Kurtwood Smith, who played the role of Red Forman in That 70s Show has joined the cast of The Ranch. Smith made an appearance in the new promo for The Ranch Part 7.
Reportedly, Smith plays Sam Peterson, a neighbor of the Bennetts. He’s not in the promo for long, but he does deliver on of the best laughs of the trailer.

The streaming Platform renewed the sitcom recently on August 21, 2019. Fans are fortunate as they don’t have to wait for a long time for their favorite series to return.
The Netflix Original Series is all set to return with its 7th part on Friday, September 13.