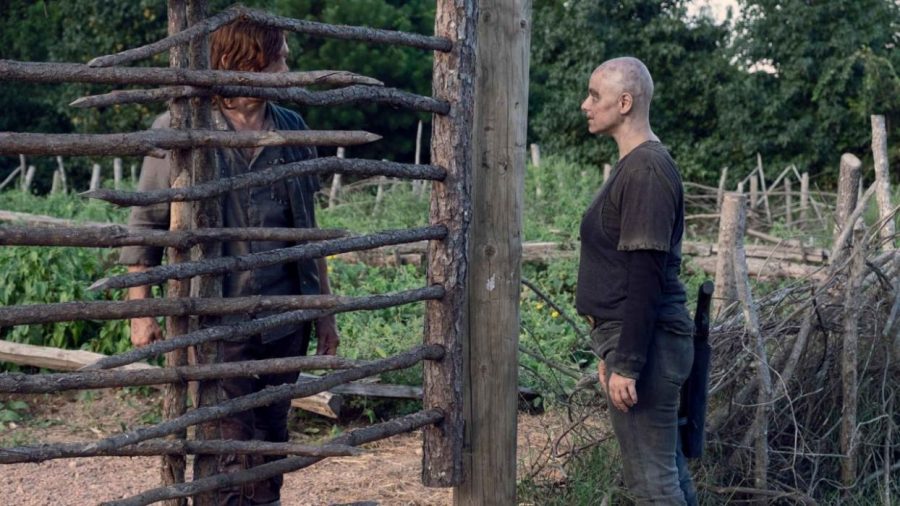 The Civil War Among The Whisperers

We saw a glimpse of this scenario in the last episode. A few Whisperer’s stood against Alpha, because of her delusional decisions. This defiance within the community was dealt with the deaths of the rebellion. However, questions were raised! Undoubtedly, those rows must have prick a nerve of other Whisperer’s too.

The last episode made clear that Alpha is also a bit biased about her daughter. However strong and dead she pretends, inside, she still has some traits of a mother. Although, when it comes to children of other people, Alpha has never compromised. This creates a bit of disagreement between Alpha and other Whisperer’s. The insurgency will not settle so quickly, it will have some more outgrowths among Whisperers.

Season 9 Episode 13 – Checkpoint’s synopsis goes as – Daryl’s daring rescue mission pushes Alpha to unleash a group of her own to reclaim what belongs to her, even if the price is paid in blood.
This time, Alpha is not up for a trade. Apparently, her leadership is in doubt along with her ‘immorality.’ Daryl rescued Lydia and Henry, which has left a massive failure impression on Alpha’s control.
Undoubtedly. Alpha is craving for revenge, and she has sent her best warrior for that. Beta will attack Daryl in the upcoming episode. However, with Lydia on Daryl’s side, it looks like Alpha is up for another defeat. Lydia has given some insights about Beta, and Daryl surely has the upper hand.
It is certain now that Lydia will stay on Daryl’s side. Daryl is emerging as the new protagonist of the show. He is also in the front for the fight against Alpha. If this doesn’t come up as a betrayal plot, Alpha is going to have some strains with Daryl and Lydia’s united front.

Will ‘The Communities’ Get United – The Walking Dead Season 9

Well, now every community knows the hell Alpha can raise. It’s quite clear that they are facing the most dominant, determinant and hell-bent villain of their life. All the communities – Kingdom, Hilltop and Alexandria, have understood that they need to be united to fight against the Whisperers. Although, the synopsis for the next episode also read that the Kingdom’s plans to reunite the communities are put in risk.
Whisperers will try anything to disrupt the reunion. However, it’s evident at some point. If there will be any chance to fight equally against Whisperers, it will include the unity of all these communities.