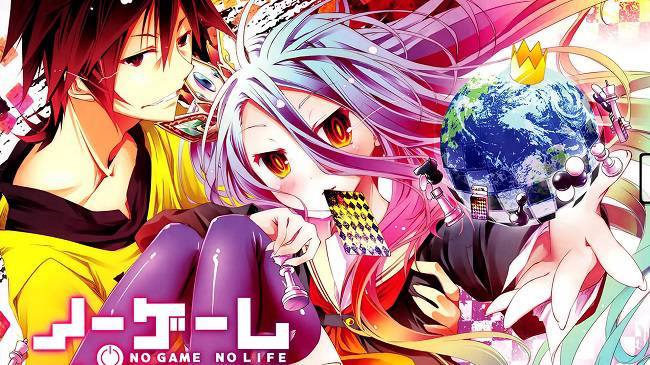 No Game No Life Season 2: All Rumours Debunked & 2019 Release Date

No Game No Life Season 2 is one of the most anticipated anime series around the world right now. The fans are eagerly waiting for another season ever since the first season which last aired on June 25, 2014. No Game No Life got very good response from the fans and was a commercial hit for the producing studio, however, the delay in No Game No Life Season 2 has raised many questions about the possibilities of another season happening in near future. Here’s the latest update on the series, if you are new to the series below is a brief description about the anime.
No Game No Life is an anime adaptation of Japanese light novel series of the same name written by Yū Kamiya. The anime debuted on April 9, 2014, and was aired on Tokyo MX’s AT-X in Japan and was licensed by Crunchyroll for the English broadcast in North America. The first season had a total of 12 episodes and like other gaming centered animes such as: Log Horizon and Sword Art Online it turned out to be a huge hit. The plot revolves around two step-siblings, 18-year-old boy Sora, and 11-year-old girl Shiro, the duo has ultimate gaming skills and have an undefeated gaming identity known as Blank.

One day the duo gets a challenge God of games, Tet, for a chess match and the two win the game. On their victory, Tet offers them a chance to go in a world where everything happens with games, the world called Disboard which has no violence and every dispute is solved with games. The step-siblings initially take it as a joke and agree to God’s offer. In order to maintain their gaming reputation, the two Sora and Shiro plan to conquer the sixteen ruling species in this world. However, the first season ended with a cliffhanger and No Game No Life Season 2 has many questions to answer.

Updated on 17/04/2018: The NGNL fans have been craving for a sequel for around 4 years now, and we know it is frustrating. The good news is that the light novel series is still running and the 10th volume titled “It Seems the Gamer Siblings are Sold to the Past” has been published on 25th January 2018.
This suggests all the plagiarism allegations on the writer of the light novel series Yū Kamiya has not affected the production of the light novel series and we hope it won’t affect the production of No Game No Life Season 2 as well.
Moreover, the highly anticipated anime film titled “No Game No Life: Zero” has got a very good response from the fans as well as critics and got the overwhelming response that it deserves. The anime film turned out to be a great success with an IMDb rating 7.7/10, which will definitely motivate the creators to come up with No Game No Life Season 2

. We have witnessed in the past the successful anime films have to lead to the production of the sequels of the anime series. We might soon have a release date so stay tuned with us.
We also noticed a fake news has been spreading amongst the fans that the Writer of the light novel series is dead. Fortunately, this is nothing but a rumor, the 33-year-old writer is healthy and doing well.

No Game No Life Season 2 Updates

It was confirmed from the inside sources that there is some development of season 2 is going on. However, an official announcement is awaited. It has been speculated that the animation studio MadHouse usually doesn’t make sequels of their animes. But Madhouse is making Overlord Season 2 which means the studio has started making sequels. Moreover, the studio is coming up with a movie adaption titled No Game No Life: Zero which is scheduled to premiere on July 15, 2017. The anime film will be based on the 6th volume of the light novel series.
This suggests that the studio still working on No Game No Life, the light novel series has a total of 9 volumes out of which first five were used for the making season 1 and the anime film will be utilizing 6th novel. The creators still have 3 volumes which are pretty enough to pull out No Game No Life Season 2

and complete the story. For now, the delay in second season release could be due to the production of the anime film.

On the other hand, the series still has a good sale and in term of viewers which are widely spread around the world are waiting for another season. Though the anime didn’t get good reviews from the critics who complained about the quality of adaptation. Right now Madhouse studio has multiple ongoing projects including No Game No Life anime film. Moreover, the light novel series is still running and may get a new volume in near future which will help the creators in enhancing the screenplay of the No Game No Life Season 2.

Status: Yet to be Announced
Chances: Very Good
The Light Novel Series is Running and the release date of season 2 is expected to be after the release of the anime film. However official confirmation is still awaited No Game No Life Season 2 may premiere in later half of 2019. Till then stay tuned for latest updates about your favorite anime series.