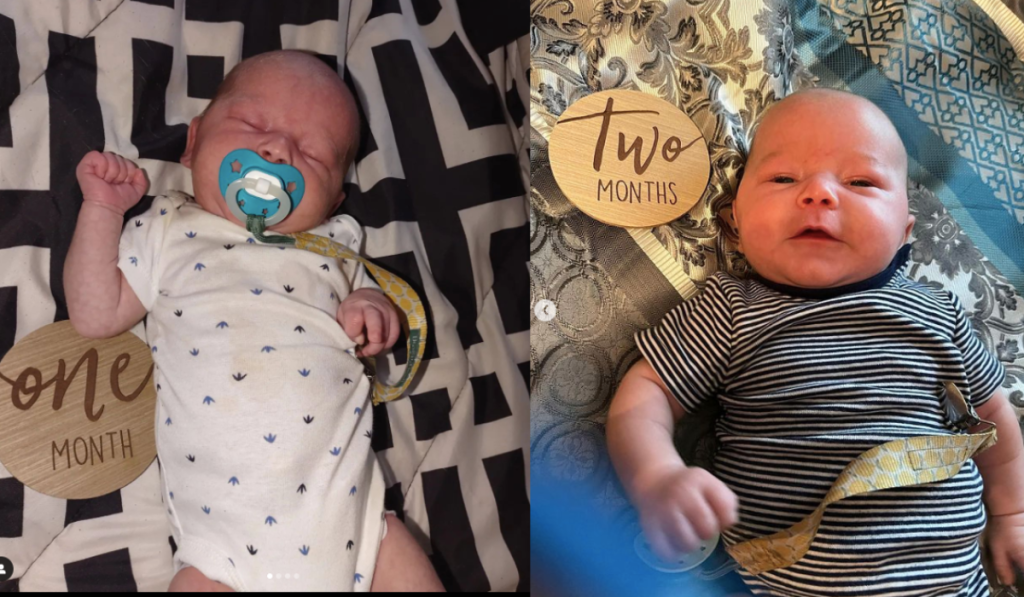 After giving birth to baby Gage, Amy Slaton has always wanted another child. The doctors often told her to wait for a few years. They wanted the reality celeb to wait as she had bariatric surgery. However, the 1000 Lb Sisters star didn’t listen and had a second baby. Amy Halterman now has two beautiful little angels to take care of. And recently, baby Glenn Allen completed a new milestone. Tune in with us to see pictures.

Amy Halterman is enjoying the perks of being a mother. She now has two babies to take care of. And the younger sibling feels blessed to have her miracle boys with her. Moreover, the mother of two has grown a lot over the years. Amy has started to focus on herself and her diet. She did it because she knew her kids would grow up seeing her. Hence, Amy has always wanted her children to have the best life. The reality star welcomed her second son on July 5, 2022. And since then, fans have wanted updates on baby #2. She did celebrate when Glenn completed his one-month anniversary. And now, Tvshowace reports the mother again shared another milestone of baby Glenn Allen.

Turns out that Glenn has completed two months successfully. Amy Halterman shared the milestone with her fans and followers on Instagram and Youtube. The mother also shared cute pictures of the little one. And baby #2 looked adorable as ever. Amy wrote that two months had passed pretty fast. And she feels like it’s only a week since he was born. The reality star noted that she is happy to have Gage and Glenn as her children. Amy also feels blessed to be a mom. Fans chimed in the comment section to congratulate her. One 1000 Lb Sisters viewer noted that Glenn looks like Amy. Another fan said they missed the show and wanted regular updates on the kids.

1000 Lb Sisters: Does Amy Plan On Growing Her Family?

While fans are happy to see the little one’s picture, they also have a question in mind. The viewers are intrigued to know if Amy would consider expanding her family. As the 1000 Lb Sisters celeb has always wanted kids, everyone’s eager to know if she will have another child. However, looking at Amy’s health, it might not be easy for her to go for a third baby. Moreover, pregnancy tends to put much pressure on the mother’s body. Besides, it’s also a question if the celeb’s body can handle such a thing again.

However, as TVSS reported earlier, Amy Slaton already has her tube ties. Therefore, she cannot have any more children. But, fans wanted the reality celeb to have a baby girl. Right now, Amy Halterman is happy to have two kids. She also noted that her family has been complete. Stay tuned to TV Season & Spoilers for the latest updates on 1000 Lb Sisters.