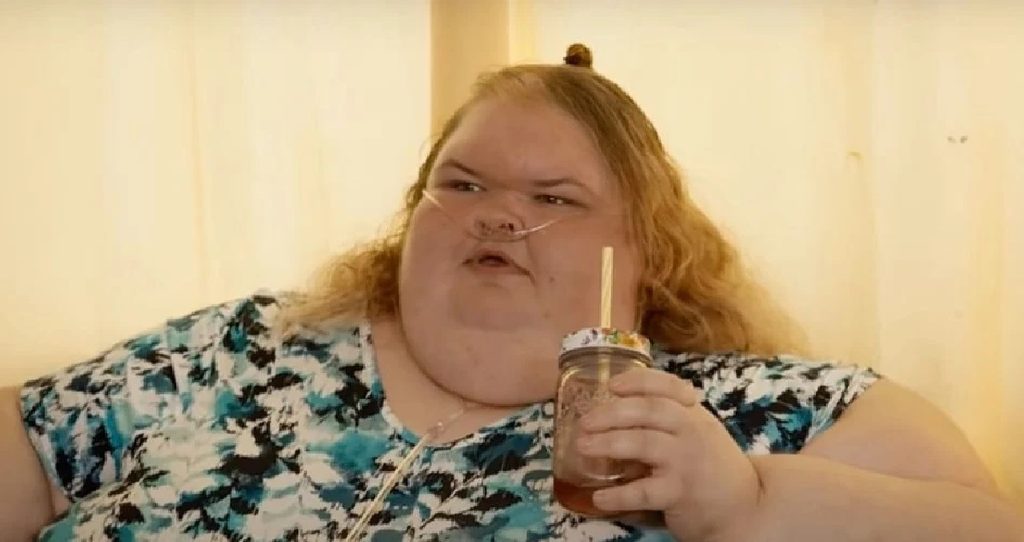 Fans have been rooting for Tammy for three seasons now. However, some are skeptical that the 1000 lb Sisters star might not be following her diet properly. Moreover, fans don’t completely trust her new boyfriend yet, either. Fans want the best for her and want her to focus more on her diet and her goal. Has Tammy relapsed after making progress? Will she finally get the weight loss surgery? Keep reading to find out!

Viewers have seen Tammy Slaton struggle with weight loss for three seasons. However, she decided to go to rehab after a life-threatening experience. Her lungs collapsed, and she was forced to have a trach inserted. The reality star has been off social media to focus on her health. However, her recent Tik Tok has worried fans. Tammy can be seen drinking a can of soft drink, which isn’t the most healthy choice for her. Moreover, fans notice this and comment how she is supposed to be losing weight and not drinking Sprite.

Tammy didn’t look very fazed by this. She calmly explained that she could have one soft drink as long as it was a diet one. The TLC star also had a witty reply and thanked her haters for making her more famous. It looks like Tammy knows her diet very well. Moreover, her face looked a little smaller than before. Some fans believe that she is slowly losing weight. Speaking of Tik Tok, Tammy has a new boyfriend as well. Mikey Mooney has been appearing in some of her videos. The men in her life have always disappointed the 1000 lb Sisters star. Fans hope Mikey does not become one of them.

Tammy has always been in a toxic relationship with feeders who have hindered her progress. Fans don’t want to see history being repeated. Viewers hope that she can focus on her diet more than anything. Moreover, there were rumors that she might be seeing her ex, Phillip Redmond, again. His fetish for big women had greatly impacted Tammy’s weight loss. The audience knows that he is bad news for her. What are your opinions? Tell us in the comments!

1000 lb Sisters: Fans Don’t Think Mikey Is The One

Reports say that Mikey Mooney had been pursuing Tammy for four years. It looks like he finally got lucky. However, fans don’t believe him yet. They think he is dating Tammy with the wrong intentions. She hasn’t been lucky in the romance department. Most of her previous partners dated her for some personal gains. However, fans don’t want to see it happening again. Moreover, Mikey’s close friend doesn’t believe him either.

In a social media post, his friend stated that he thinks Mikey is dating Tammy only to get famous. Moreover, it’s just a ploy to get him on TV. However, Mikey gave a firm reply saying that he had been pursuing her for four years. It’s not about fame, and he genuinely likes her. Fans don’t know who to believe yet. Only time will tell if Mooney is genuine or not. Stay tuned to TV Season & Spoilers for further updates on 1000 lb Sisters.