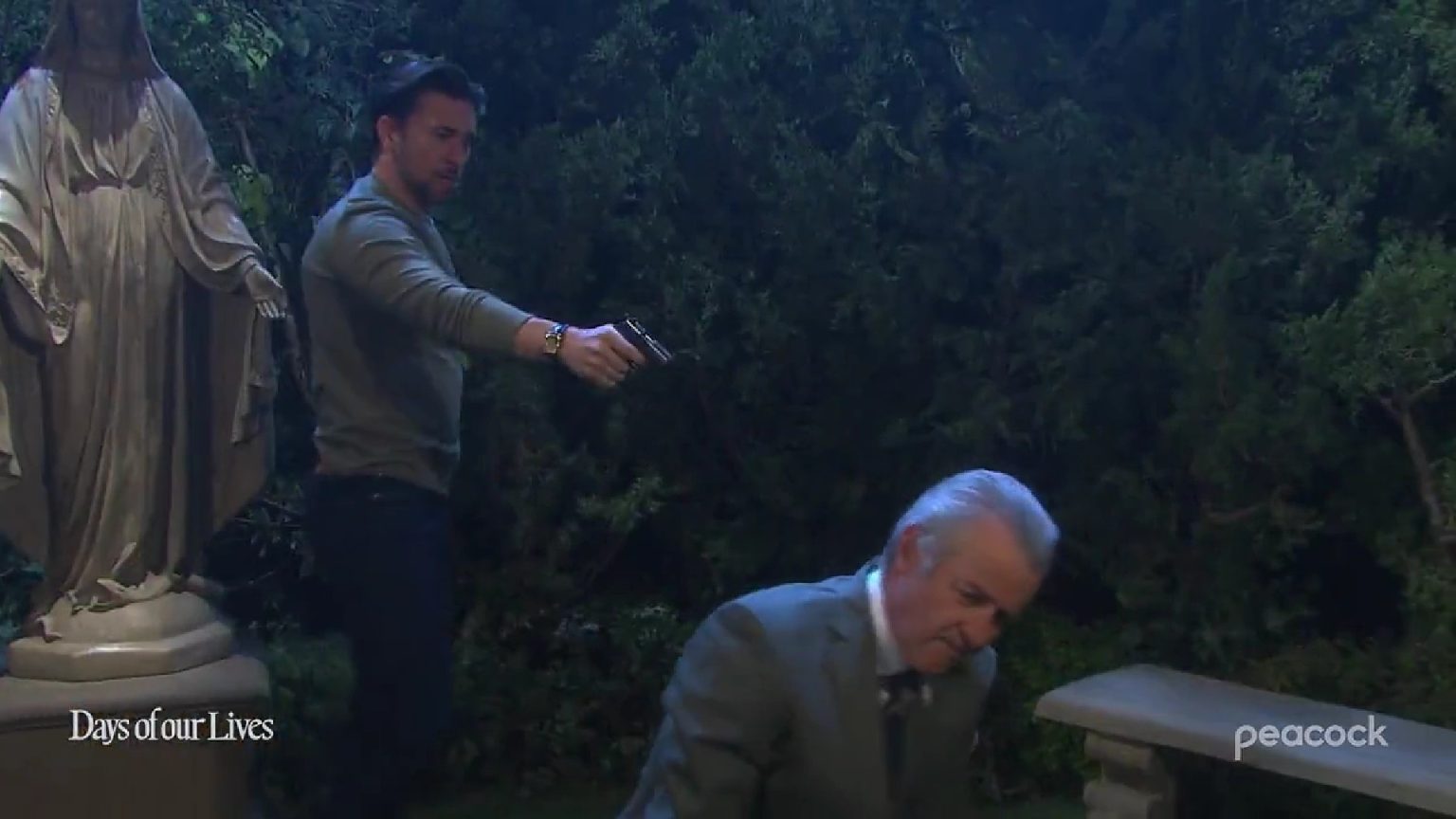 Days Of Our Lives Spoilers For September 27, 2022: EJ Points A Gun On Clyde, Gwen Helps Jennifer

Days Of Our Lives spoilers for September 27, 2022, tease that Clyde and Chad will get in a physical altercation. Once Clyde gets the upper hand, he will try to strangle Chad to death. Over with EJ, he will get suspicious of Chad’s movements and decide to track for his brother along with Belle and Shawn. Across the town, Gwen will spill Jennifer’s drug-popping update to Jack. Later, a drugged-up Jennifer will get into a car crash. This article explains more about what is to happen in today’s episode. Keep reading to know.

After Chad tracks Clyde, he will drag him inside a cemetery. There, he will want him to explain why he killed Abigail. Days Of Our Lives spoilers say that once Clyde finishes with the reason, he immediately will snatch Chad’s gun. Once Clyde gets the upper hand, he will push Chad to the ground and start strangling him.

At the DiMera mansion, EJ’s thoughts will be all over Chad. He just saw him leaving the mansion in a furious state. So, he will wonder what has happened to his brother. However, once he finds the gun missing from the safe, EJ will join the dots. Along with Belle and Shawn, he will decide to track Chad. In the meantime, Clyde’s message will cross Belle’s thoughts. He did inform her about his wedding and asked her to pass on this message to EJ.

Now that Belle remembers it, it’s pretty easy to track down Chad. In the cemetery, EJ finally will witness Chad and Clyde having a physical altercation. In order to help his brother, EJ will grab the nearby gun on the floor and pull the trigger toward Clyde. By mid-week, hints are there that EJ will get his revenge on Clyde by shooting him.

Further on Days Of Our Lives, Gwen bursts Jennifer popping pills. Despite pleading not to say this to Jack, Gwen will make a final decision. It will be better for her to inform Jack about it. After all, it is good for Jennifer. Once Jack thanks her, she will realize she has done good.  Over with Jennifer, after popping a huge quantity of pills, she will have a ghostly vision of Abigail. Initially, she will think if Abigail is really there or if it’s just her hallucination. But, Jennifer will use the situation well. After she howls how much she misses her, she becomes an emotional wreck.

Later, Jennifer will get in her car in a drugged-up state. Does this mean she is going to put herself in danger? Well, indeed, she is going to. DOOL spoilers say that Jennifer will bang her car into another car coming from the opposite direction. However, looks like, in all this, Gwen will be the one rushed to the hospital. After getting badly injured, will she be able to survive? We will know that in the future. Stay tuned and watch Days Of Our Lives, it airs every weekday on Peacock+ in the US and on The W Network in Canada. For more spoilers and updates, visit our website, TV Season & Spoilers.