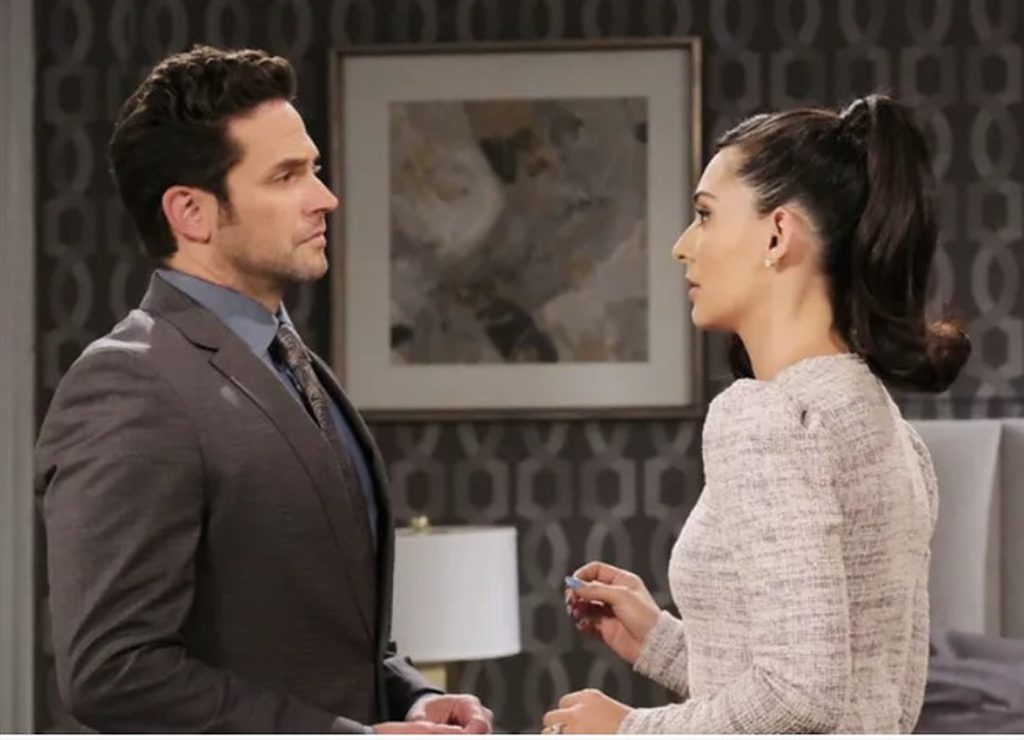 Days of Our Lives Spoilers For The Next Two Weeks (December 26–January 6, 2022): Orchid Goes Missing, Stefan Learns A SHOCKING Truth

Days of Our Lives spoilers for the next two weeks, from December 26 to January 6, 2023, reveal that Xander and Gwen’s wall of lies will crumble down. Elsewhere, Chad will ruin Alex and Stephanie’s plans making Alex lose his patience. Wendy will also be on the verge of spilling the beans to Gabi out of guilt. Will she really do that?

During the week of January 2-6, 2022, Stefan will finally learn about brainwashing and how Li sponsored it. However, Gabi will again be heartbroken if Stefan makes a major decision. Over with Nicole, she will battle with feelings for EJ and will also send in the divorce papers to Rafe. Elsewhere, Kristen will be shocked to discover that the orchid is missing. Keep reading to see what is brewing in Salem.

First, Alex and Stephanie will have some plans for the day, but Chad will come to ruin it. Days of Our Lives reveal that Chad will trigger Alex’s jealousy. Fans know that Chad also likes Stephanie and was waiting to get over with Abigail’s memory. Now that Chad fears Stephanie and Alex to get into a serious relationship, he will cause troubles to them. Looks like the love triangle is to take a turn for the worse.

Elsewhere, Sonny won’t be willing to throw Leo out of the mansion just because Will wants to. As for Will, he definitely won’t believe Leo’s words that he has changed. Leo has been Will and Sonny’s enemy for a very long time, but since Sonny has changed, Will won’t agree to this. The spoilers say Will Horton will start looking for some other place to stay if Leo is staying in the mansion.

Over with Brady and Eric, they will execute their plan to kidnap Rachel and use her as leverage. However, things will take a turn for the worse when Kristen will find that orchid is missing. Since the orchid can bring back Rachel, what will she do now? We will know that soon.

Next, Wendy will battle with guilt and will be on the verge of spilling the beans to Gabi. Days of Our Lives spoilers reveal Wendy won’t be able to keep the secret for much longer. If not, tell Gabi the whole truth, chances are there Wendy will trigger Gabi’s past memories. Fans know that Rolf did confess Li’s involvement in Stefan’s brainwashing. So, Wendy will trigger that memory before Gabi was administered with memory-altering serum.

Once Gabi realizes Li’s involvement, she will rip into him and dump him in front of all the people. Not just that, she will also refuse to marry him and call off the wedding. The real question is: What will Li do with Wendy when he realizes she might have a hand in reminding Gabi of the past? We will know that. Over with Xander and Gwen, they will also be in a lot of trouble since their wall of lies will be crumbling down.

Days Of Our Lives Spoilers For The Week Of January 2-6, 2023: Orchid Is Missing!

During the next week, Kristen will come to find the orchid since she will want to bring back her daughter. Days of Our Lives spoilers tease Kristen will be shocked to find the cupboard empty. There won’t be any orchid inside it, and she will wonder where it has gone. In the meantime, Brady will be extremely disappointed with Kristen’s reaction and the way she is handling the whole situation. Even though he knows Rachel is safe, he will notice how Kristen is behaving.

Over with Eric, he will also include Sloan in all the kidnapping framing drama, which she will later regret. Elsewhere, Nicole will worry about her growing feelings for EJ. No matter what she does, she just won’t know how to handle her feelings for EJ. A part of her will deny it, while another part will find it hard to keep her feelings a secret. Other spoilers claim Nicole and EJ will soon kiss each other and might also take things further. We have to see whether these two will get into a relationship or not.

Moreover, Nicole will also send in the divorce papers to Rafe. Even though he is feeling extremely upset that his marriage has broken, he won’t have other choice but to sign the papers. Rafe will lean on Jada for comfort. On the other end, Johnny and Wendy will share a new year kiss and will talk about their future. All this while, they were faking their relationship, now they will decide to give it a chance for real.

Fur ther on Days of Our Lives, Stefan and Chloe

will be back in town after their Miami trip. The spoilers say they will get the shocking updates about Gabi cancelling the marriage. Not just that, Gabi will also fill in Stefan with how Li sponsored the brainwashing and programmed him to hate her. Stefan will also come to know that EJ knew about it all along and kept his mouth shut for his profit. While Stefan will have too much to handle, he might break Gabi’s heart again. Chances are there, he might not want to reverse the procedure and be back to loving Gabi.

Across the town, Sarah will also have to decide about the fate of her marriage. Now that she knows Xander was the one who kidnapped Susan and kept Bonnie as a hostage, she will be horrified. In the meantime, Gwen will also face legal problems along with Xander. Back with Eric, he will confess to Marlena and John about Rachel’s kidnapping plan. So, both of them will be scared to see his evil side and will also fear that Kristen might unleash her wrath if she comes to discover it. On the other end, Kate’s health will deteriorate and Rex will be concerned for her. Brady will accuse Kristen of missing the orchid and putting everyone’s life at risk.

Finally, Alex will go overboard when he interrogates Chad about his feelings for Stephanie. Once Stephanie realizes Alex is just acting too much, she will call out his jealousy. Will Alex’s anger make him take some weird decisions? We will know that soon. Stay tuned and watch Days Of Our Lives, it airs every weekday on Peacock+ in the US and on the W Network in Canada. For more updates and spoilers, visit our website, TV Season & Spoilers.