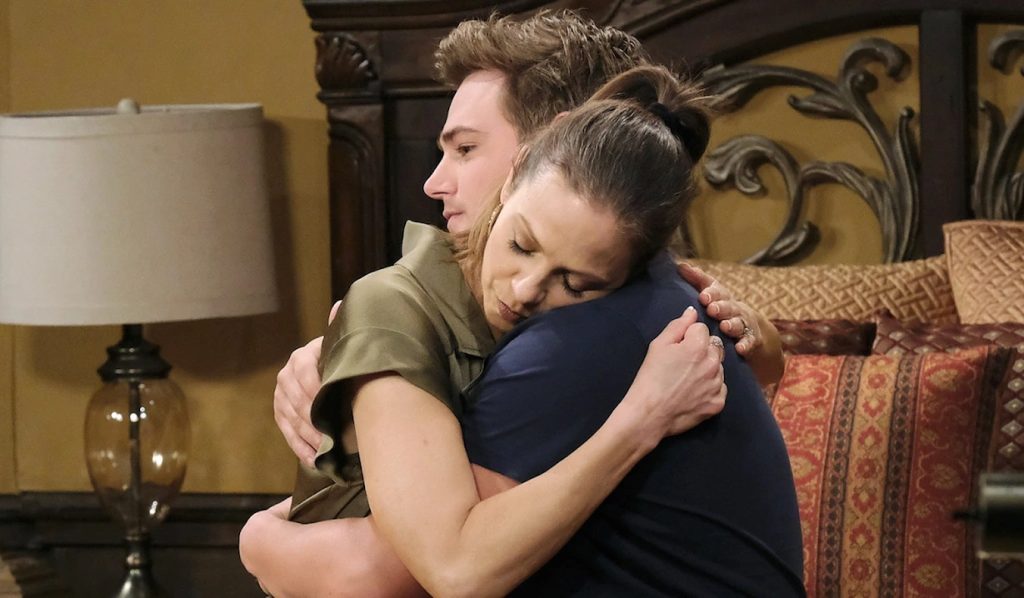 Days Of Our Lives Weekly Spoilers For The Week October 10-14, 2022: Ava’s Truth Is EXPOSED, Nicole Confesses Her True Feelings

Days Of Our Lives weekly spoilers for the week of October 10-14, 2022, tease that Allie and Chanel will come up with a wild proposal for Alex. Later, Li’s sister, Wendy Shin, will land in Salem. Elsewhere, Nicole will confess her feelings for Eric to Chloe. Then, EJ will expose Ava’s lies about her marriage to Jake. Keep reading to know what unfolds in the next week in DOOL.

In the week of October 10, 2022, Ava will land in hot water. Her walls of lies will crumble down as EJ will expose her right in front of Johnny. Days Of Our Lives spoilers suggest that EJ will learn that Ava was lying about her marriage with Jake all this while. Of course, he won’t spare this opportunity and will expose her lies to Johnny.

As for Johnny, even though he will be shocked by the update, he will be concerned about his father. Looks like Johnny will realize that EJ is more concerned about DiMera Enterprises and not him. By the end of the week, fans can expect Johnny to get extremely furious with EJ and start planning to take revenge.

Elsewhere, Li’s sister Wendy Shin will land in Salem. Once she crosses paths with Johnny, they might realize that they both have the same goals. Back with EJ, he will bluff how he has got an advantage at DiMera Enterprises. Now that Gabi’s CEO position is in danger, Li might come to bargain a little with EJ. While problems already surround Li, Wendy’s arrival in town will add to it.

Across the town, Nicole will admit her feelings for Eric to Chloe. So, she will have to figure out what she can do since Eric is still with Jada. Speaking of Eric, he will be concerned about Marlena’s health. So, Jada will console him, but somewhere, Eric will still want Nicole to be the one consoling him.

Days Of Our Lives Spoilers: Chanel On Edge

Further on Days Of Our Lives, Chad and Stephanie will feel some sparks between them. Once there is a PR crisis, both will rush to solve it. Looks like Paulina will be the client in need. Sloan has already blackmailed her, so Paulina will share that update with Chad and Stephanie. Chanel she will also learn about Sloan’s discovery, so that will leave her on edge.

Further Days of Our Lives spoilers for the week of October 10, 2022, The rare orchid, which Rex thinks is extinct, is actually there with Kristen. Since the former hostages’ health is declining, Orpheus will corner Kristen to know what she is up to. Looks like she will take advantage at the right time. Once their health deteriorates even further, that will be the right time to bargain with her Brady request. So, Kristen will wait for that.

At the hospital, Marlena will spend time with John. Other spoilers say that Roman will propose to Kate and hope she stays with him for the rest of their lives. Over with Kayla, Tripp and Joey Johnson will return to Salem to be with her. Brady will grow increasingly concerned with Marlena’s health crisis. Since Marlena and Rachel share a great bond, Brady will worry about Rachel’s feelings as well. So, Chloe will come up with a shocking idea. Chances are there that Chloe might suggest Brady to stay some time apart. Brady will be taken aback by this suggestion.

Since Kristen is plotting for that, Chloe will decide to make Kristen believe that she is getting what she is rooted for. Will Brady agree to her deal? We will know that in the upcoming episodes. Stay tuned and watch Days Of Our Lives, it airs every weekday on Peacock+ in the US and on The W Network in Canada. For more updates and spoilers, visit our website, TV Season & Spoilers.