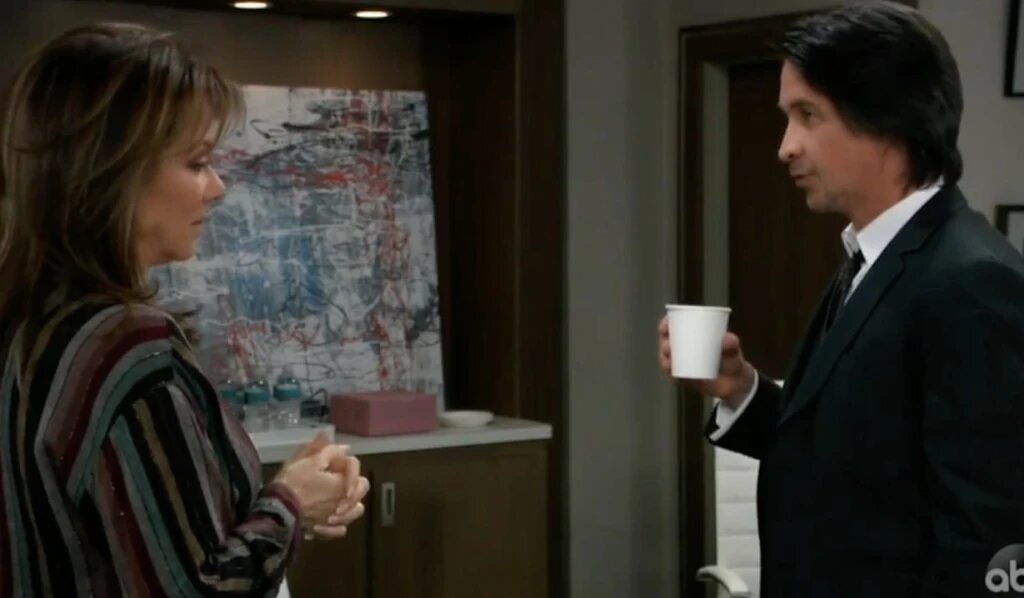 General Hospital: Finn Gets Close To Alexis, Tries To Find Bedroom Comfort After BREAKUP With Liz

General Hospital spoilers tease towards a shocking step that Finn might take after his breakup with Liz. Finn might go back to his past and sleep with his father’s speculated love interest, Alexis. Will leaving Liz make Finn lose his stability and end up getting comfort with Alexis in the bedroom? Keep reading to discover how the storyline might pan out around this scenario.

It all started with Liz’s desire to get to the rock bottom of what all she is facing in her life. Fans know that Liz was having some really traumatic memory flashes. When she went in for a hypnotic treatment, the first person she drew was Finn’s ex-wife, Reiko. It was really confusing for Liz to know why she drew her and what relation she has with her to remember her.

However, later Liz got shocking information from Jeff about what Reiko had with her family, especially Jeff. The first thing Liz did was to fill in Finn with the shocking updates. Turned out that Reiko was the same person who Liz pushed from the staircase. She somehow came to know about her and Jeff’s affair. Since she couldn’t take her father’s cheating on her mother, she just finished off the root cause. After listening to this update, Finn was certainly taken aback. He didn’t know what to do or how to react to Liz’s confession.

When Liz came clean and asked for forgiveness from Finn, he said he was also sorry. Finn caressed Liz’s cheeks before leaving without saying anything. This whole scene rather looked like as if Finn was bidding goodbye to her. Other General Hospital spoilers also showed how Liz shared that it was really difficult for her to move forward in the relationship, knowing how much pain she has caused to Finn. Looks like Finn and Liz’s relationship will end soon, and they will ultimately decide to break up. Apart from that, GH is also trying to put Liz and Nikolas in one frame past few days. So, there is a high chance that Liz might now get paired with Nik. Then what about Finn? What and where will he go? Let’s discuss the possible pairing that GH might give to Finn.

General Hospital Spoilers: After Breakup, Finn Repeats His Past, Comes Close To Alexis?

In soap operas, it is very normal for people to repeat their past. That’s how Finn might also get his storyline in the upcoming days. After breaking up with Liz, there are high chances that Finn might repeat his past mistake. During the week of November 14-18, 2022, General Hospital spoilers say Finn will lean on Alexis for support. She’ll also help Finn get the right path and advise him on his issue with Liz.

Long-time fans might remember that Finn has a past where he slept with Gregory’s fiancée. And for many years, Finn and Jackie kept it a secret. At one point, Finn also thought that Harrison might be his son. Since Alexis and Gregory have been growing closer to each other, there are chances that Finn might repeat his past blunder again. Above all, General Hospital tries pairing Finn and Alexis romantically once upon a time. So, it won’t be a surprise if they do that again.

Moreover, the timing also sits perfectly. Finn and Liz’s relationship is close to breakup, so it is the right time to give that experiment a chance. Will Finn’s way of taking advice from Alexis make them grow close to each other? We will know that. Stay tuned and watch General Hospital, it airs every weekdays on ABC. For more updates and spoilers, visit our website, TV Season & Spoilers.