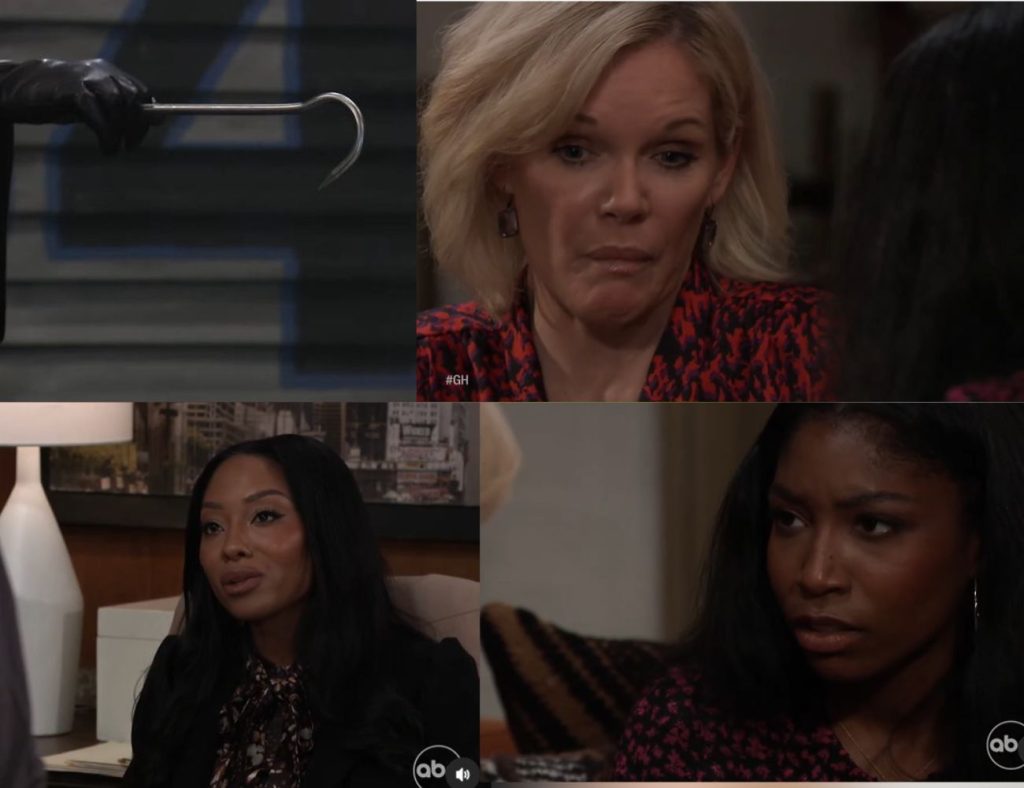 General Hospital Preview Video For The Week of December 12-16, 2022 reveal that if you thought the Hook killer has taken a back seat, he/she is back to prove you wrong! Jordan Ashford and Dante Falconeri open up to the possibility that Esme Price might not be the killer. Meanwhile, elsewhere the killer raises the hook again! Who is going to taste the hook this time? Will Jordan and Dante be able to unmask the real killer? Keep reading to find out what to expect on General Hospital this week!

The latest preview video of General Hospital suggests that the Hook Killer is taking center stage again in Port Charles. Dante and Jordan have an intense discussion regarding the killer’s rampage. Jordan suggests that it would be premature to think that the Hook Killer is done. She is sure that the psycho murderers days of poisonous slashings are far from over. Jordan shares her concern over the killer running free in the city. Meanwhile, Dante agrees that “she” needs to be stopped.

It is interesting to note that the PCPD now believes that the Hook Killer at General Hospital is definitely a woman. What could have led to such a definitive conclusion? While there are plenty of clues that signal the teen devil Esme being the culprit yet again, chances are she might be innocent for once in her life. She is safely locked up by Nik, and if she stays there while the next Hook attack happens, she will be in the clear. However, in the preview video, Ava tells Trina that it could be that Esme is not the Hook Killer. Why are Ava and Trina talking about Esme? Have they found out that she is still alive? Keep watching the upcoming episodes to find out!

The latest General Hospital preview video shows Spencer looking extremely perplexed, ready to take another swig from the bottle he is holding. Other GH spoilers suggest that Spencer is having difficulty adjusting to normal life after being released from prison. He is getting angsty and is acting out. He will lash out at his father for not letting him come home. While Nik might just be trying to keep Spencer as far away as possible from Esme. Spencer might find some support

from grandmother Laura. Meanwhile, he is also taking Trina’s connection with Rory pretty badly too.

Elsewhere, The Hook Killer is done being dormant in General Hospital. The preview video shows the Killer raising the poisonous hook yet again. Who could be the next target? Elizabeth’s shocked face flashes on the screen! Is she going to taste the hook yet? Meanwhile, Rory Cabrera kicks open a door and enters with his pistol trained up. On the other hand, Dante stealthily makes his way down a corridor. Are the two cops about to nab the Hook Killer?

General Hospital has taken a really intriguing turn, and our interest is piqued to the highest level! What do you think will happen next? Will the PCPD be able to nab the Hook Killer before the next attack? Who is the killer targeting now? Do you still believe Esme could be it? Please share your views in the comments. Meanwhile, stay tuned to ABC to see what happens next on General Hospital. You can watch the preview video for the week below.