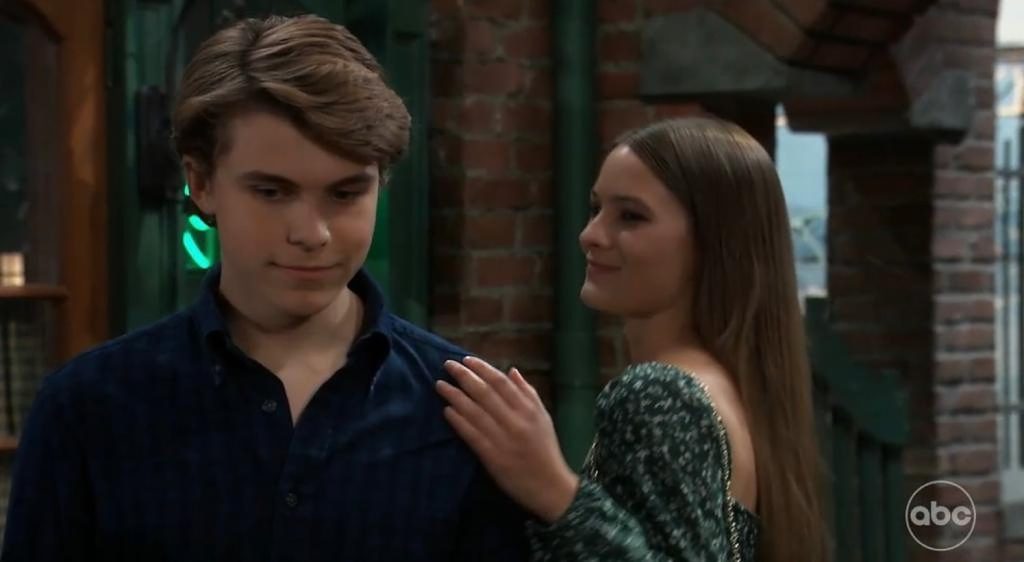 A new coupling is about to take onto the land of General Hospital in the upcoming episodes. This is sure to be a shocking pairing, and the latest spoilers tease that a shocking yet controversial pairing might be coming soon on GH. Looks like Cameron and Esme might be that controversial pair in the town. In some shocking twists, there is a possibility that the two of them might end up together. What might be the chances that push these two together? Let’s discuss it.

Cameron’s Past Kindness For Esme

Previously when Esme’s character was introduced in General Hospital, she tried to be a part of Spencer’s friend circle. Even though she faced some friction with Trina and Josslyn, Cameron always gave her the benefit of the doubt. Not just that, but he was always very kind to her. That had actually touched Esme’s heart (which in our opinion is actually very hard).

As the storyline moved forward, fans realized that Esme is a character who needs attention and sincere love. She has only gotten that from her nanny. She also deprives affection in her life. As of now, Cameron is having issues with Josslyn. It started when he kept Spencer’s plan a secret from her. After that, Josslyn and Cameron got emotionally distanced. Even though they are together, Josslyn is getting attracted to Dex day by day.

Back with Esme, as mentioned above, she needs genuine love, which she doesn’t have in her life. When she was with Spencer, it was more or less like a game of manipulation. Later, Spencer even started having feelings for Trina and thought of duping Esme with some fake DNA reports. In short, Esme never got to experience true love. Further spoilers hint that Josslyn might soon cheat on Cameron with Dex. If that’s the case, Cameron will end up in a pretty bad situation. Will this lead to Cameron coming closer to Esme, who he once treated with kindness? Let’s discuss what might happen in the upcoming episodes.

General Hospital writers have already started showing Josslyn taking an interest in Dex. Other spoilers have also hinted at a possible bold move where Joss might cheat on Cameron. So, what’s next? Cameron will need someone to move on with. As for now, Trina is with Rory

. So, Cameron is left with one option, which is Esme Prince. Fans might remember the time when Cameron showed his compassionate side to Esme. Even though she had troubles with Joss and Trina, Cam was always nice to her. Now that Esme is back in town, will his compassionate side also return? Despite her planning and scheming tactics, will Cameron be the same as Esme?

Of course, Esme has done bad things in the past and is also continuing to do them, history has witnessed that in GH, the characters tend to forgive their partners even in the case where they have done much worse than Esme. For instance, Nelle drugged Sonny and pretended to sleep with him to hurt Carly. But Michael forgave her. So, it won’t be a surprise if Cameron also forgives Esme for what all she has done in the past – also doing in the present! Although Cameron and Esme might not be close right now, but if Cam continues to show kindness, chances are there that the kindness might ignite feelings.

If one looks at Esme’s side, she is in need of genuine affection. Right now, with all the chaos she is creating or planning to create, she will definitely need someone loving to guide her on the right path. Given how Cameron was protective of Joss, he will definitely protect Esme if he falls for her. Once Esme experiences true love, there are chances that she might also choose the right path to be with Cameron for life long. Of course, her so-called bio dad, Ryan, won’t approve of it. Whatever the case, it looks like the story is going to take a turn by pairing Esme with Cameron. Stay tuned to see if this controversial couple is really going to be on-screen. General Hospital airs every weekday on ABC. For more updates and spoilers, visit our website, TV Season & Spoilers.