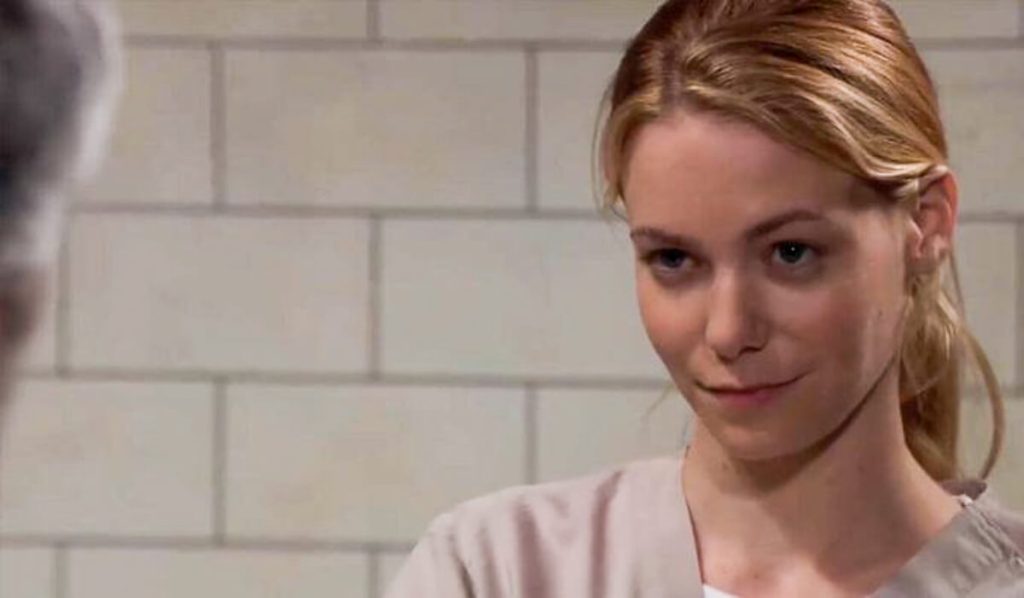 The mystery on General Hospital about who the Hook Killer could be in getting deeper by the day. With every passing episode, a new revelation is made that ends up killing off the previous speculations. From fans on social media to entertainment portals, everyone has been left scratching their heads over this one.

Earlier, the number one suspect for the Hook Killer on General Hospital was the teen devil- Esme Price. However, with her pregnancy coming to the front, the possibility of her being a slasher has halved. Moreover, her baby’s supposed daddy, Nikolas, currently has her locked up in his basement. So if another victim falls, Esme would be in the clear altogether.

However, that makes the question even thicker, who dunnit? We are suddenly left wondering that what if the previous theory about the killer being connected to the Corinthos is after all true?  That brings us to lay our eyes on another speculated killer! Nelle Benson! She surely has the deviousness to do it! Also, she is someone no one would suspect. Considering that she is completely out of the picture on General Hospital.

If you take a closer look, she ties up so neatly with the Hooked victims. The first person to get the hook was Ava Jerome. We know that Nina Reeves is Nelle’s mother. Which makes Kiki Jerome her half-sister. And no points for guessing, Ava is her mother!

The second victim was Brando, who we think is collateral damage! But what if he wasn’t? Yes, the hook killer was after Joss, but the killer could’ve easily spared Brando if they wanted to. But did not! Maybe the killer hooked Brando because of his closeness to Sonny and Carly Corinthos. Carly has been holding on to Nelle and Esme’s twin secret!

The third to taste the hook was Diane Miller. Previously, on General Hospital, Diane had ripped Nelle a new one in the court. So, it’s no surprise that Nelle would want to rip into Diane! More literally! The lady lawyer did tell that the Hook Killer was a woman. It’s understandable that in her delirious state Diane could not recognize Nelle. Additionally, Diane also happens to be Sonny’s family lawyer.

The latest one falling prey on General Hospital to the venomous hook, was Oz! While there isn’t any direct known connection between him and Nelle, there could be a secret one! Or, maybe she randomly attacked him just to create confusion in joining the dots!

Why We Think Nelle Could Be The Hook Killer!

There are also speculations that the Hook Killer terrorizing General Hospital could also be Esme’s nanny! The theory behind it is that she could be operating under the assumption that Esme is now dead. The woman loved Esme as her own daughter. She is now avenging her loss by going after everyone who ever wronged the dead teen.

However, as of now, we are more inclined toward believing that Nelle Benson is the one! In a recent interview, Johnny Wactor (Brando) shared that the killer is someone who is not appearing on General Hospital right now. And Nelle has been missing for some time from the soap. However, in September 2022, Chloe Lanier (Nelle) had made a guest appearance on the soap. She appeared in Willow’s nightmare, standing over the dead bodies of Carly and Michael. Later, she also appeared in a vision Nina had.

We can’t help but wonder if that was a hint at what’s to come! Moreover, Carly is still holding on to the secret that Nelle is Nina’s daughter and Willow’s fraternal twin. What would be the point of this story if General Hospital isn’t going to bring it out? And what would be the point of bringing it out if Nelle wouldn’t be on-screen to react about it? Does it make sense to you? Please share in the comments if you think Nelle could be the deadly Hook Killer. Meanwhile, let’s stay tuned to ABC’s General Hospital to find more clues!