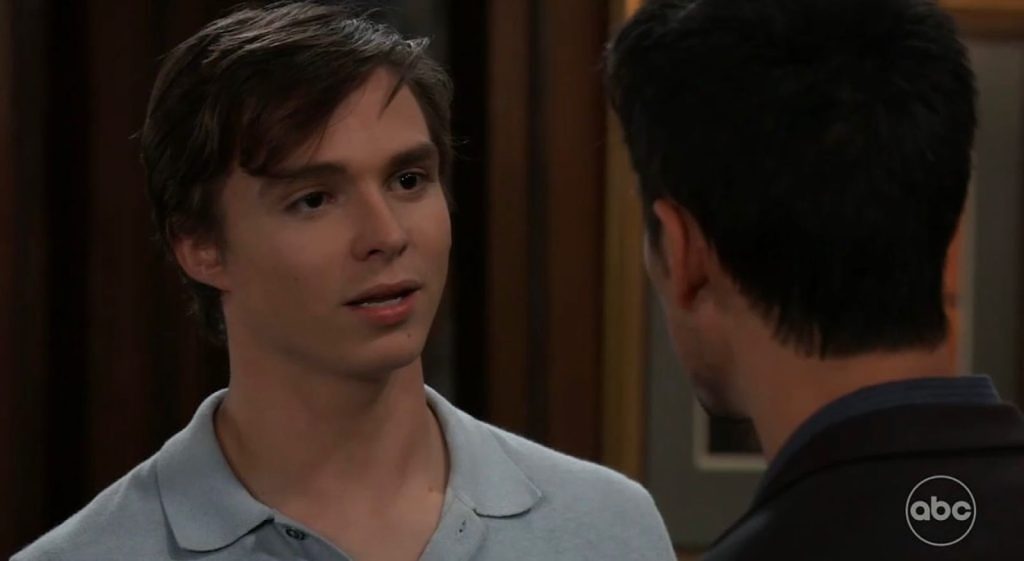 General Hospital Spoilers For August 26, 2022: Spencer Is FURIOUS At Nikolas, Victor Gets Suspicious

General Hospital spoilers for August 26, 2022, reveal that Spencer will overhear Ava and Nikolas’ clash. He will learn about Nikolas and Esme sleeping together. In the meantime, Terry and Yuri will connect romantically. Elsewhere, Elizabeth will lash out at Finn. Further, General Hospital spoilers say that Anna will assign another task to Lucy. Keep reading to see what is brewing in Port Charles.

On Friday, Ava and Nikolas will have a heated argument. General Hospital spoilers claim that Spencer will overhear Ava taunting Nikolas for sleeping with Esme. Meanwhile, Spencer will get furious and will push Nikolas to explain him. Nevertheless, Ava will confirm it.

Later, Nikolas will try to explain things to his son. But, Spencer will feel rage in absolute disgust, which might even end with him disowning his father. Afterward, Nikolas will lash out at Ava. Moreover, he will also throw some harsh reality on her face. If not Cassadines, Ava will have no one by her side, and Nik will remind her of this.

Elsewhere, Terry and Yuri will connect with each other. It is teased that these two were the actual ones who gulped down the love potions. Things will take a turn for good for these two lovebirds.

Further on General Hospital, Anna will assign a task to Lucy. She will want her to dig deeper and find some dirt on Victor. However, to keep Anna away from Martin, she will willingly obey her orders. However, Victor will get a hunch about Anna. He will feel that Anna’s threat is still lingering around him.

Ultimately, he will approach Valentin to confirm that Anna’s issue is sorted. Speaking of Valentin, he will reassure Victor that Anna is no longer a threat to them. Over with Lucy, she and Felicia will update Anna about Cody and his biological mother.

Elsewhere, Austin will be done with his cousin. He will be frustrated with mason ordering him around. Once Mason threatens him with Maxie, he will lose his cool. He will grip Mason’s head and will warn him to leave Maxie out of the mess. Speaking of Mason, he is merely his boss’ puppet. He will do whatever his boss asks him to do. Whatever it is, Austin is likely to get under his boss’ skin soon. Stick to GH for more updates.

Next, Liz will learn about Finn’s phone call to her sister. General Hospital spoilers claim that Liz will be furious at Finn. Despite her repeated warnings to stay away from her family, Finn disrespected her space. During her argument, she will again face a traumatic flashback. Looks like their relationship will remain patchy.

Over with Cody, he will chase Britt again. He will wonder why she is hesitant to discuss her father. Whatever it is, he will surely push Britt for answers which might ultimately turn her off. Later that evening, Ava will land in grave danger. A mysterious person with a hook will chase Ava.

She will be scared to death. But, fans can expect someone to land at the right time. Who could that be? We will know that. Watch General Hospital, it airs every weekday on ABC. For more information on updates and spoilers, visit our website, TV Season & Spoilers.