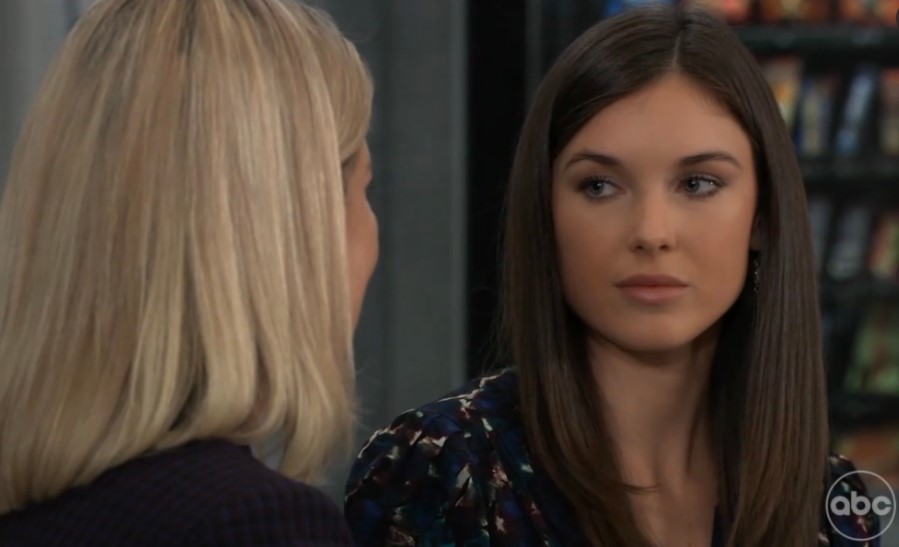 General Hospital Spoilers: Willow Comes To Know Her And Nina’s Bio-Connection, Rocky Road For This Duo Coming Up

General Hospital spoilers suggest that a rocky road is coming up for Nina and Willow in the upcoming days. GH viewers who have been keeping up with the soap know that the speculation of Nina being Willow’s bio-mom has been making rounds.

So, that might be, and when Willow comes to know that Nina is her mom, after all, she might not be that accepting. In fact, General Hospital spoilers suggest that Willow might put up a fight and might not give Nina the chance she wants. What will happen? Here is all about it.

General Hospital Hints A Rocky Road For Nina And Willow

General Hospital viewers keeping up with the soap would have seen a fierce face-off between Nina and Willow in the March 1, 2022 episode of the soap opera. The confrontation started with Nina begging Willow to let her see Wiley Quartermaine. However, things soon changed when she started threatening Willow with pursuing Wiley’s legal rights. Nina believes that Wiley is the only blood she has left, and she will fight for him.

However, Willow seems to have a different opinion. Willow feels that a blood connection is not everything. It does not give a person the entitlement to have a relationship with anyone. Not if the persons involved will keep hurting each other. While this did seem a little out of nowhere at this moment, it seemed a lot like a hint for what was coming up.

The speculation has it Nina is Willow’s biological mo ther

. Since Willow doesn’t think that being biologically connected is everything, she might not let Nina in like she would have wanted to. A rocky road might be coming up for Nina and Willow in the upcoming days. But, how will things pan out?

Nina Desires To Be A Mom, Will She And Willow Be Able to Make A Bond?

Long-time GH viewers know that if there is something that Nina wants is to be a mother. She desires to be a mom and has wanted that for years. So, even if Willow tries to put up a fight, General Hospital spoilers suggest that Nina will fight. When she comes to know that Willow is her bio-daughter, all her inhibitions will melt away, and Nina will want to embrace this new relationship.

However, things won’t be the same from Willow’s perspective. General Hospital spoilers suggest that if Nina pushes Willow and Michael too far in trying to get her visiting rights for Wiley, Willow might decide that she cannot let Nina in. In fact, she might reject Nina. Willow’s belief that blood doesn’t entitle someone to become a part of someone’s world will make her push Nina away without even giving her a chance.

Would Nina let all of this go so easily? It doesn’t look like so. Some General Hospital spoilers say that Nina will fight for Willow, and she might try to make a connection. Initially, Willow might put up a fight. However, she might soften later on. What do you think? Is Willow really Nina’s daughter? Tell us your opinions in the comments below. New twists and turns are coming up on General Hospital in the upcoming days. Don’t miss the action.