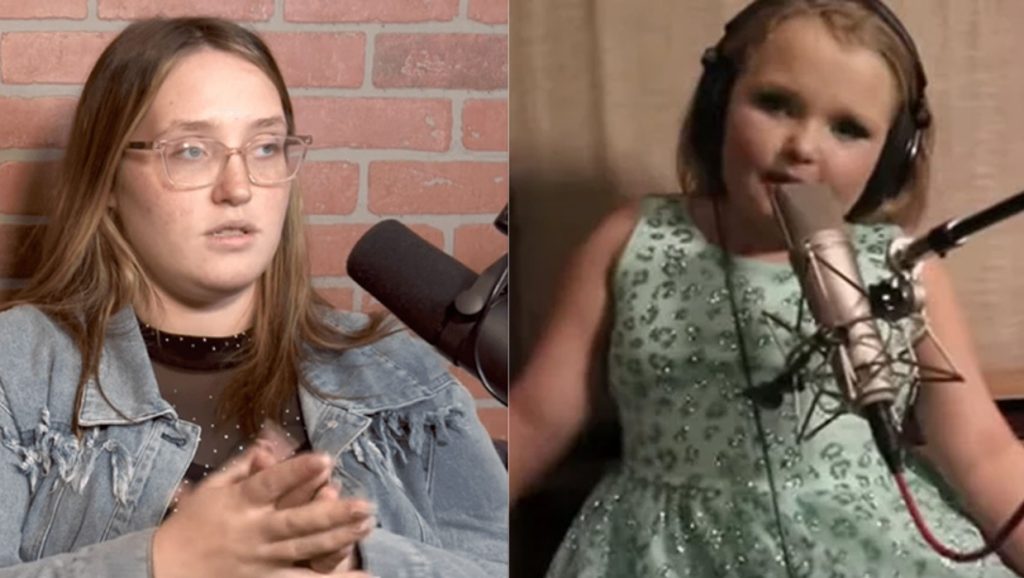 The Mama June fans are well aware of the reality show cast’s chaotic lives. Apparently, June’s children have had to deal with a lot of things because of their mother and her boyfriends. However, it seems that finally, the star sisters are healing from the wounds that June and her partners gave to her. Recently Pumpkin and Honey Boo Boo appeared on Dumb Blonde Podcast and decided to be vocal about the mishappenings they faced in their childhood. The shocking revelations went around how Shannon was introduced to drugs and Sugar Bear abused the elder one. Hence leading to the situation where the channel insisted the sisters attend therapies. We have all the information, so keep on reading.

Mama June: Pumpkin Reveals That The Channel Forced Her To Get Therapies

The Mama June fans couldn’t believe it when they finally got to know the big picture of the show. Apparently, Lauryn, aka Pumpkin, recently revealed that she and her sister had faced a troubled childhood because of her mother and her boyfriends. Also, the star kid further revealed that Alana’s father, Sugar Bear, was physically and mentally abusive to her. Hence, things were so grossed out that their current Channel, WEtv insisted the star sister go for therapy against their will.

Lauryn further revealed that the channel paid for her visit to the therapist. Not only this, but they also insisted the star attend a full season of it. However, she wasn’t a fan of going to therapies and revealed that she never confessed ‘her business’ to the therapist. The Mama June celeb Pumpkin’s husband, Josh Efird, was also a part of the podcast and revealed that the show’s producers and WEtv realized that there was a fair chance that Lauryn would suffer from severe mental issues. Apparently, the channel and the makers were well aware of the star kids’ ordeals behind the scenes.

Josh further added that the makers had it in their mind that these kinds of issues would lead to brain damage, so they decided to offer help. Alana further revealed that she also had sessions with multiple therapists, and none of them helped. Apparently, Honey Boo Boo has trust issues now and opines that sitting with a stanger and sharing her issues will never help her. What helped them was their humor. Alana and Lauryn accepted that they had laughed through their pain. That has kept them going and helped them recover from life’s agonies.

The Mama June star kids recently revealed that Shannon and the makers of the show were well aware of the abuse that Pumpkin faced. Still, they chose to cover it up. Not only this, but Lauryn also revealed that there was a lot going on behind the scenes, and fans could never watch the reality of the show, which was filled with mental and physical abuse. While mentioning the abuse the 22-year-old faced, she mentioned an instance w here Sugar Bear threw keys in her face

. Apparently, the keys hit her hard on her eye and almost damaged her retina. To rectify it, she had to undergo surgery as well.

Apparently, when the incident took place, June was in another room and knew what was happening. The makers and producers also knew about it because Lauryn claims she never hid the abuse from them. Still, Sugar Bear’s violent behavior was termed as a “freak accident”. Not only this, it was shocking when Pumpkin revealed that the family was asked to do a “reenactment” of the mishap. In that, they ‘joked’ about the incident! However, Mike has declined all the allegations put against him. Keep coming back to TV Season & Spoilers for all the latest Mama June tea.