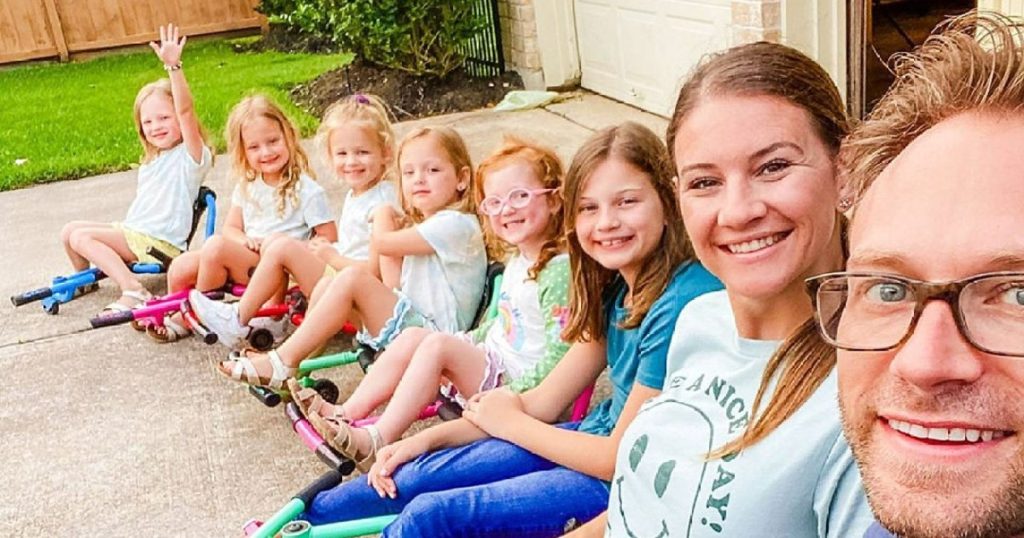 Adam and Danielle Busby have been documenting their journey as parents on TLC since they became parents. They are special parents who gave birth to quintuplet daughters and began starring in OutDaughtered. The show has been on the air for the last eight seasons. However, the future has been bleak for the fanbase. That’s because they are unsure if the family will return for more seasons. Apparently, the Busbys announced a temporary hiatus from filming. However, Adam Busby gave everyone a glimmer of hope with a new Instagram post hinting that he and his family have been filming. Keep reading to know more details about this!

OutDaugthered: The Busbys Working On ‘Something Special’ As Ava Poses With A Camera! Coming Back On TLC?

Adam and Danielle Busby have shared a huge chunk of their lives on TV ever since they became parents. All of them, including their elder and quint daughters, appear on OutDaughtered and showcase their adventurous life. However, it has been many months since the show got renewed for a new season. So, viewers began to worry that TLC canceled the show. That’s when the parents did some damage control and announced they were on a year-long hiatus from filming more seasons. Well, that doesn’t seem to be the case anymore. Apparently, Adam Busby announced something exciting through his Instagram handle.

It turns out that one of his daughters, Ava Lane, was posing with a professional video camera in the post. Adam mentioned that they wouldn’t be posting a new vlog for their Youtube handle, ItsABuzzWorld. That’s because the OutDaughtered family has been busy with “something special”. Hence, he asked the fanbase to tune in to their Youtube channel to know more details about it in the coming time. The fans believe that the camera in the picture was proof enough that the castmates are returning to TLC. Well, it is quite unclear if the family is going to return with a brand-new season or just a special episode. There is no confirmation about this, so fans are eagerly waiting for an announcement to know for sure.

OutDaughtered: Here’s Why The Busbys Are On A Break!

The last episode of OutDaughtered premiered more than a year ago, in May 2021. Since then, neither TLC nor the Busby family has given updates about the future of the reality show. Hence, the fans began bombarding the family with the details about the same. All of them dodged these heated questions for quite some time. When they couldn’t do it anymore, Adam and Danielle planned a Youtube video with all six of their kids. In there, the family explained why they took the decision to take a break from filming. It turns out the world was slowly returned to normal since COVID-19 hit. Hence, Adam and Danielle wanted to work on their kids returning to their normal routines.

In fact, the parents wanted the Busby girls to participate in more outdoor activities as they couldn’t enjoy this one aspect since the pandemic. Hence, filming for their show would have made things hectic and difficult. So, the family has been away from reality TV cameras for a while now. Adam also wanted his little girls to experience a world without professional cameramen following them at all times. Hence, this decision seemed to work for everyone. Danielle also mentioned that the break is supposed to be for a year. However, they weren’t sure when the family members would return to document their lives on TV. But things might have changed since Adam put up that Instagram post. Keep coming back to TV Season & Spoilers

for the latest OutDaughtered updates.