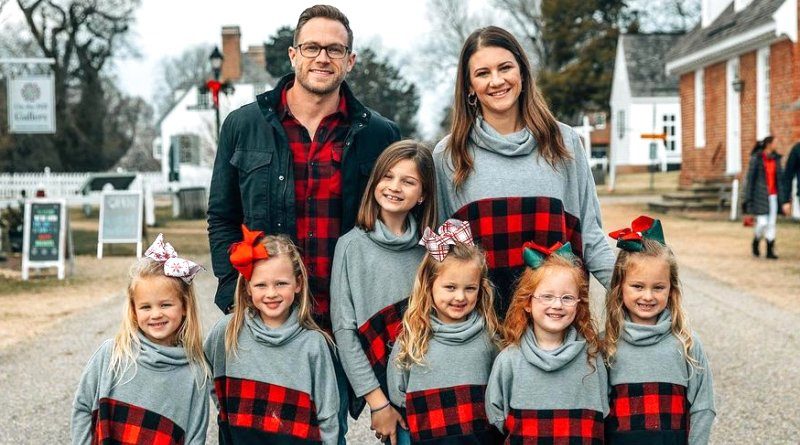 The popular Busby family from TLC’s OutDaughtered is on another vacation. In the current season of the show, the family is already on a trip. However, they go on such trips very often. In fact, they are currently on a Spring Break vacation. Adam and Danielle Busby informed their fans on their social media. Here’s a detailed look at the topic.

Our favorite little girls are on vacation yet again. The family recently kick off their Spring Break with a beautiful trip to the Houston Zoo in Texas. Tvshowsace points out that they stayed at the Woodlands Resort and Conference Center in Texas. The OutDaughtered dad posted a story about stopping off for food at Baja Sur Fresh Mex. Danielle’s story reveals that the kids had fun at the pool. The mom later posted a picture of her daughters wishing fans on St Patrick’s Day.

Later on, Adam posted a picture of Ava with the caption “S’mores at sun down!”. Another photo on the couple’s Instagram page @itsbuzzworld captures the OutDaughtered girls alongside their friends standing in front of a dinosaur sculpture in Houston Zoo. Also, in Adam’s latest Instagram post, featuring his daughters in The Woodlands Resort and Conference Center. In the caption, he writes that even the turtles at the resort are friendly, or maybe they might be curious to see five kids that look alike. Overall, it seems like the vacation was a hit, and the girls had a lot of fun.

OutDaughtered: Adam Scares Fans With “The End” Message, Is The Show Ending?

Adam Busby posted a picture recently featuring them doing a play. However, they were also holding a “The End” board. When fans saw this, their first thought was if the TLC show is ending. A bunch of fans even commented that Adam scared them with the picture. They thought that the family was announcing the ending of OutDaughtered. Fortunately, the picture does not hint towards the completion of the show. The caption of the Instagram post reveals that the children were doing a play of how Adam and Danielle met.

The TLC dad said that the play wasn’t an accurate representation of how he met his wife. However, he was sure that it was a great memory for the kids. Another one of Adam’s Instagram post is a picture of a scene from the play featuring Blayke and her cousin. In its caption, the Busby patriarch hints that fans will get to watch this play in the upcoming episode of OutDaughtered. The next episode of the TLC show comes out on March 23, 2021.