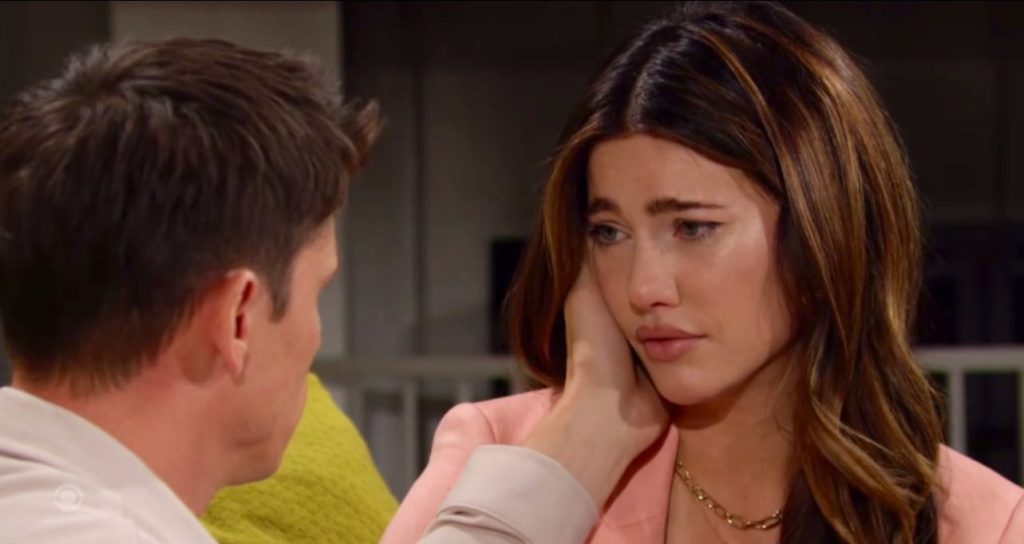 The Bold And The Beautiful Spoilers For August 8, 2022: Steffy Lashes Out At Li, Ridge Is Confused

The Bold And The Beautiful spoilers for August 8, 2022, reveal that Finn and Steffy will return home with Ridge and Taylor. Steffy will be ecstatic but overwhelmed that Finn has returned to her life. They both with go to the hospital together. There, they will let everyone know that Finn is still alive. Later, Steffy will lash out at Li for keeping Finn’s survival a secret. Even though she may acknowledge that Li might have her own reasons, she will not spare her. Elsewhere, Ridge will be back home with Brooke. He will still be in the thoughts of Taylor and the sweet moment. Keep reading to find out what Monday’s episode has in store.

Steffy is grateful but overwhelmed that her prayers were heard and Finn came back to her. However, she may still have someone to confront and ask questions. The spoilers for The Bold And The Beautiful Monday episode claim that Steffy will lash out

at Li. She will ask her as to why she kept Finn’s survival a secret.

Li will inform her that she had her own reasons, but Steffy might not be convinced with her answer. She will tell her that while she was crying and mourning Finn’s death, she could have told her. Even a hint would be enough. Steffy’s mental health was at stake, she was falling into a deep depression and was admitted to the hospital. Li herself, being a doctor, should have known what possible outcomes a person may face during the depression. Not just Steffy, but it was also the entire family who suffered.

In the meantime, Finn will try to play peacemaker between his wife and adoptive mother. He will try to explain to Steffy that because of Li, he is alive and with his family. As for Li, fans know how Sheila went behind her until her car caught fire and fell into the water. Before that, Li also revived Finn

, who was shot by his maniac mother. Apart from all this, she was the one who teamed up with Bill and Liam to save Finn. Not to mention, she also got knocked by Mike. Finn will remind Steffy about everything. Will Steffy understand his point and forgive Li? Or, will she ask Finn to cut ties with his mother? Will know this in Monday’s episode.

The Bold And The Beautiful Spoilers: Ridge Messed Up Feelings

Further on The Bold And The Beautiful, Ridge will return to Brooke. She will tell him how happy she is that he is with her. However, fans can expect Ridge to still think about the sweet moment that he shared with Taylor. He is still married to Brooke but will realize that he has not let go of Taylor entirely. His feelings are likely to get jumbled up over the course of time.

The real question here is whether he is going to tell Brooke about the kiss or not. If he says, how is she going to react? Will that mean a new rift or a possible eruption of a toxic love triangle? Will know this in the upcoming episodes. Watch The Bold And The Beautiful, which airs every Weekdays on CBS. For more information on updates and spoilers, visit our website, TV Season & Spoilers.