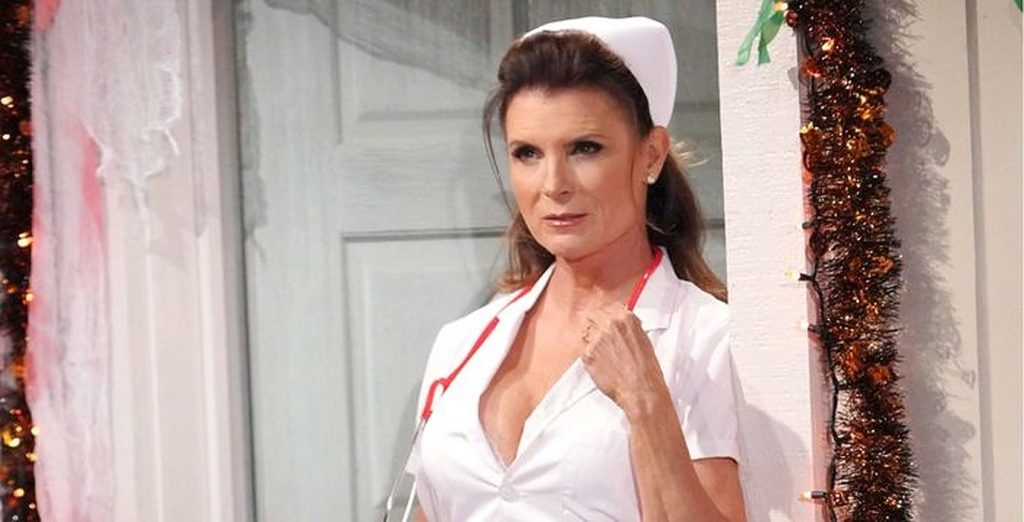 The Bold And The Beautiful spoilers for October 31, 2022, reveal that Sheila will don a nurse costume this Halloween, creating more troubles in Deacon’s life. Apart from that, the show will celebrate Kimberlin Brown’s 30 years of playing Sheila Carter. So, things are going to get spooky. Over with Deacon, his co-worker will pay a visit at his place. Will he be able to spot nurse Sheila in his house? Keep reading to know what will unfold in Monday’s episode.

First, The Bold And The Beautiful will honor Kimberlin Brown for her 30 years of playing Sheila Carter. In that celebration, viewers will get a standalone episode for Sheila and the ruckus she stirs. Looks like Sheila will don a nurse costume and decorate Deacon’s place with creepy decorations. But before that, she will have something to confess to Deacon.

Fans know the time when Sheila sneaked from his apartment, so she will admit to Deacon about that. As for Deacon, he already has warned Sheila countless times not to go anywhere. So, he will have a scare for himself since Sheila never listens to him. However, Deacon will have no choice since he already has harbored a fugitive, and now he can’t change anything. His only priority will be not to get caught.

Back with Sheila’s st andalone episode, fans will get to see a very special show. A show where B&B will take us down memory lane with all the tricks Sheila has played all these years. The worst of all, scheming will also be shown. So, gear up for some exciting round of emotional rollercoaster.

The Bold And The Restless Spoilers: Paul Scares Deacon

Next, Deacon’s co-worker, Paul from II Giardino, will pay him a visit. Off course, Paul’s presence will scare Deacon because he is harboring a fugitive and will never want his friend to find Sheila. Everyone right now is under the impression that Sheila is dead. So, if Paul finds her at Deacon’s place, he will be done for a lifetime.

Looks like Paul will come with his children, so that might scare Deacon even more. As for Sheila, she will place a pumpkin along with her spooky decorations. Up until now, Sheila was disguising herself as “Lina,” and now she is wearing a nurse costume. She sure is getting crazier day by day. Other spoilers tease that Sheila will be done with hiding and will soon unleash her wrath. Who will be the first to come under her radar? Finn and Steffy? We will know that. Stay tuned and watch The Bold And The Beautiful, it airs every weekday on CBS. For more updates and spoilers, visit our website, TV Season & Spoilers.