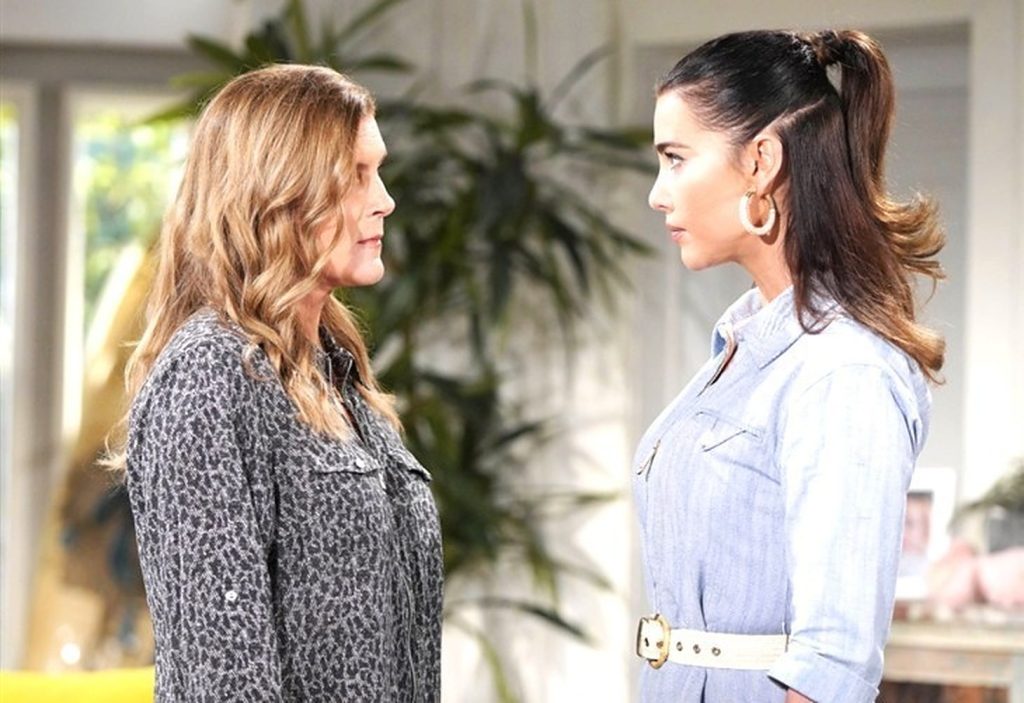 The Bold And The Beautiful Spoilers For The Next Two Weeks (January 9-20, 2023): Sheila Corners Steffy, Liam Fumes Over Blackmail

The Bold And The Beautiful spoilers for the next two weeks from January 9-20, 2023, reveal that Bill will somehow manage to strike some deal with the judge. While Steffy and Finn will be hoping for an outcome in their favor, Sheila will corner Steffy. Seeing her optimism, Steffy will fear that something wrong is to happen soon. Indeed, that is what is going to happen since Sheila will soon be out of prison.

During the week of January 16-20, 2023, Liam will get shocking updates about his father romancing with Sheila. Also, now that Bill and Sheila have teamed up and are blackmailing Finn and Steffy. Hearing this, Liam will lose his composure and blast at his dad. How will Bill react to his son? Let’s read further to know what is brewing in B&B in the coming weeks.

The Bold And The Beautiful Spoilers For The Week Of January 9-13, 2023: Steffy-Finn In Confusion

This week, the cops will present Sheila in court after the arrest. The Bold And The Beautiful spoilers reveal that Chief Baker will meet with Finn and Steffy and will remind them how important their testimony will be. Even though they know the importance, they will be in a sticky place because of Bill. He is the one who reminded Steffy of the past and has threatened them to press charges on Taylor if they say anything against Sheila in the court.

As for Steffy, she will still feel that the evidence will be enough for the judge to make a decision in their favor. In the meantime, Taylor will feel something is off and will ask Steffy if she is hiding something from them. This is when Steffy will spill the beans to Taylor, and she will be shocked to the core. Seeing how her daughter is suffering, she will urge her to tell the truth to the cops.

Even if Taylor has to end up in jail, she will be ready to do that to save her children from Sheila’s wrath. However, Steffy will be adamant and will decide to take things into her h ands. Finn will also support his wife even though he has experienced Sheila’s craze, he will choose to prioritize Taylor’s safety.

Further, Steffy and Finn will reach the court for the hearing. The Bold And The Beautiful spoilers reveal that Sheila will corner Steffy. She will say something to her which will rattle her up. Chances are that she may ask her to be aware, or she is coming back to get back with Finn and Hayes. Whatever she says, Steffy will surely be horrified. But at the same moment, she may also notice her optimistic behavior, as if she is sure she will be out of prison.

Thanks to Bill, Sheila will be confident that the judge will pass a decision in her favor. Looks like that is what is going to happen indeed. The judge will be the same who, in 2018, handled Katie and Bill’s case. At that time, Ridge bribed him to give a decision in Katie’s support. Chances are, Bill might have the recording and threaten the judge to support Sheila this time. Whatever happens, Sheila will be out of prison in no time.

Elsewhere, Carter will have some shocking news for Katie and Brooke. He will inform them about the whole incident involving Sheila. So, they will fret about what’s going to happen next. Finn will also have some updates for Katie and Brooke. Looks like he might disclose Bill and Sheila’s romance to them. All this while, Katie thought Bill was a hero, but now she will know that he was helping his lover.

The Bold And The Beautiful Spoilers For The Week Of January 16-20, 2023: Liam Blasts On Bill

Next week, Liam will also learn about some details of Sheila’s case. However, he won’t know the entire truth. The Bold And The Beautiful spoilers reveal that Liam will grill Steffy and push her to spill the truth. Once she tells him about Bill and Sheila’s romance and team up, he will be stunned. The blackmail update will completely make him fume in rage. Fans can expect Liam to blast at his father in the upcoming week.

Katie will also hope that she might try to change Bill’s decision to be with Sheila. So, she will track him down and plead with him to stop whatever he is thinking of doing. Other spoilers say Taylor and Sheila will also have a showdown, we have to wait to see what will happen over there. The Bold And The Beautiful airs every weekday on CBS. For more updates and spoilers, visit our website, TV Season & Spoilers.