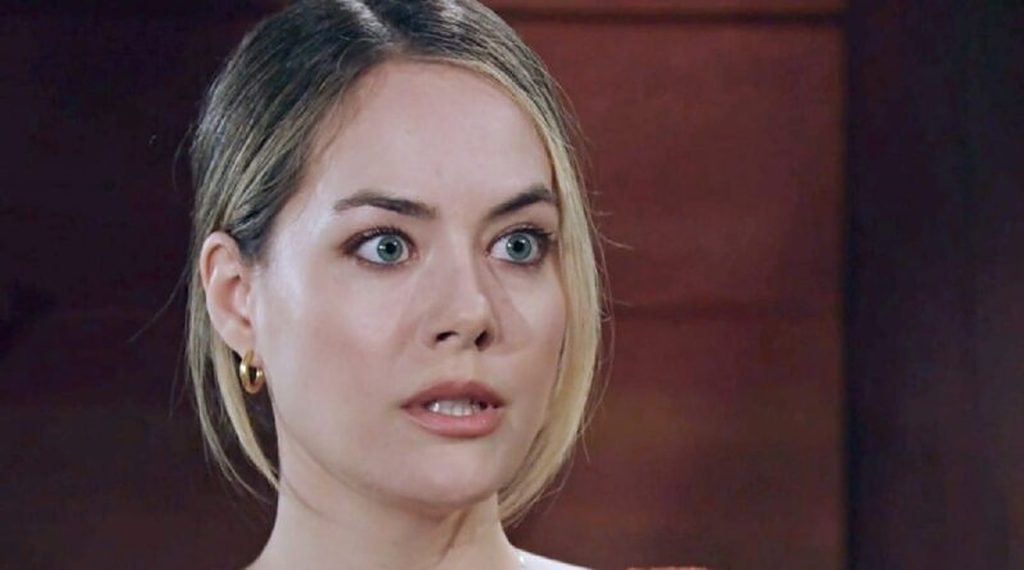 B&B/Hope's (Annika Noelle) past comes to haunt her
News

The Bold And The Beautiful Spoilers For The Week October 31-November 4, 2022: Sheila’s Special Episode, Hope’s Past Haunts Her

The Bold And The Beautiful spoilers for the week of October 31 to November 4, 2022, tease that the show will air a special episode for Kimberlin Brown (Sheila Carter). In that, she will take a sinister turn and make things more spooky. Elsewhere, Hope will get a fashion show shocker, thanks to Thomas. Later, she will question his intentions behind the move. What could it be that made Hope uncomfortable? Keep reading to know what happens in the next week of B&B.

Next week, The Bold And The Beautiful will honor Kimberlin Brown’s 30-year anniversary as Sheila Carter. However, fans know that next week, it’s also Halloween. So, it is obvious that the show will make the storyline spooky since Sheila will be given a standalone show.

Fans can expect to see a trip down the memory lane of all the notorious scheming and plotting Sheila has done till now. Then again, right now, Sheila is extremely jealous of Brooke and how Deacon is interested in her single status. Not to mention the wedding proposal, will Sheila spare them? No, she won’t! When she didn’t even spare her son, Deacon, or even Brooke for that matter, will face Sheila’s wrath soon.

In the meantime, one more thing to notice here is: Will people learn about Sheila’s survival? Since things are to get spooky and Sheila is ready to twist the storyline, will she continue to remain Lina? We will know that. Next week’s The Bold And The Beautiful is going to be very interesting with Sheila’s standalone episode.

The Bold And The Beautiful Spoilers: Fashion Show Shocker

After Sheila’s wrath, there will be someone else who will twist the storyline even further. It will be none other than Thomas. The Bold And The Beautiful spoilers claim that Hope for the Future will have a fashion show next week. As they are to launch the new collections, Hope and Thomas

will make the final preparations.

However, looks like Thomas will make things uncomfortable for Hope. It is unknown as to what he might do, but whatever it is, Liam will be concerned about Hope. He won’t like the recent closeness between Hope and Thomas. Liam knows very well how obsessed Thomas was with Hope. So, he would fear regarding the same.

Once Thomas makes some uncomfortable moves, Hope will question his intentions. Well, that won’t be the end. The Bold And The Beautiful spoilers tease that Thomas will bring out the showstopper gown that will make the situation even worse. There will be some drama because of that gown which will scare Hope. She will be able to see Thomas’ old side and fear for his growing obsession.

Looks like Thomas will deliver a speech at the end of the event. There, he will give the entire credit to Hope and how she inspired him to design the dress. The speech might look much of some kind of confession instead of giving mere credit. So, this will scare Hope to a great extent. Will Hope watch her steps, at least now? Liam already cautioned her, will she decide to listen to her husband and maintain distance from Thomas? We will know that. Stay tuned and watch The Bold And The Beautiful, it airs every weekdays on CBS. For more updates and spoilers, visit our website, TV Season & Spoilers.