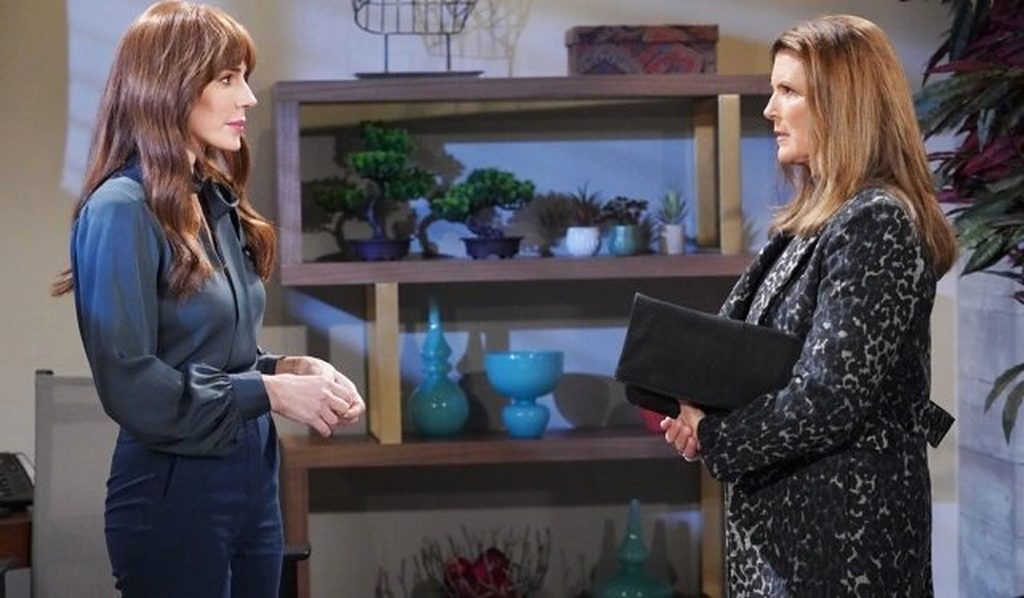 The Bold And The Beautiful Spoilers For The Week Of January 16-20, 2023: Taylor-Sheila’s Verbal Showdown, Katie Pleads Bill

The Bold And The Beautiful spoilers for the week of January 16-20, 2023, tease that Taylor will confront Sheila after her release. Both of them will have a verbal showdown, but Sheila will, as usual, rile Taylor up again. In the meantime, Katie will also plead with Bill to see clearly what he is doing and will ask him the reason. Elsewhere, Liam will also get updates about Bill and Sheila and will hit the rooftop. Will Liam confront his father? Keep reading to know what is brewing in B&B next week.

First, Taylor will confront Sheila after her release. The Bold And The Beautiful spoilers claim that Taylor will lash out at Sheila for blackmailing Steffy and Finn. She will be done with the she-devil ruining everyone’s life, especially her daughter’s. Steffy and Finn had already faced a lot because of her, so she won’t want her to make it more miserable for her kids. She will just want Sheila to leave the town.

However, Sheila will remind Taylor that she was the one who gave her another chance in Los Angeles years back. Taylor will admit that she made a huge mistake at that time and will ask her to leave her kids alone. Other spoilers say Taylor will also lash out at Bill for teaming up with Sheila and ruining his own life. While Bill will think that Taylor is just blabbering, fans know that she, indeed, is right.

It won’t just be Taylor who will confront Bill, but also Katie. She will also confront Bill and have the same question in mind. Looks like Katie will ask Bill the reason for choosing Sheila out of all. So, he will tell her how everyone chose to leave him, and Sheila was the only one who was there for him. He will also say how Katie doesn’t even care about him anymore. Katie will assure Bill

that she does care for him, but it’s not in the way he thinks. No matter if she likes him or not, she will continue to care for him. Fans know that Bill won’t listen to anyone now that he has got Sheila in his life.

The Bold And The Beautiful Spoilers: Liam Fumes In Rage

Finally, Steffy will inform Liam about Bill’s romance with the craziest woman in town and their partnership. The Bold And The Beautiful spoilers say Liam will fume in rage once he hears about his father’s latest crime. When Bill wore that sword necklace, he knew that his father was up to something evil again. But never would he have imagined that his father will choose Sheila out of all.

Other spoilers say Liam will decide to confront his father soon when he is not with Sheila. Over with Finn, he will also be answerable to Li when she finds out about Sheila’s release. Fans know what all Li went through when Finn was kidnapped last time, so she definitely is shocked. Moreover, she will also worry about Bill as well. Stay tuned to know what happens next. The Bold And The Beautiful airs every weekday on CBS. For more updates and spoilers, visit our website, TV Season & Spoilers.