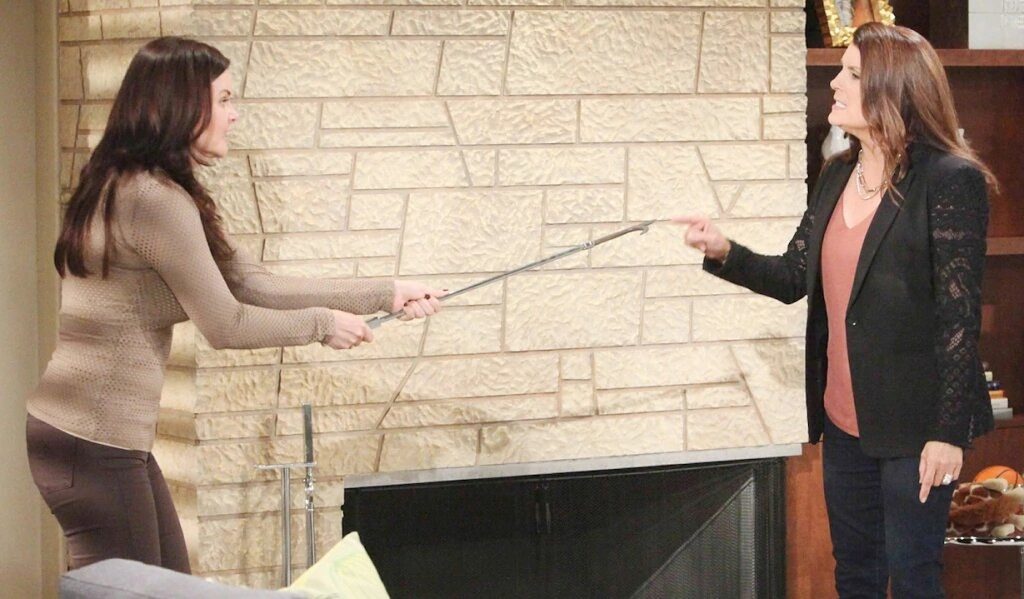 The Bold And The Beautiful Spoilers: Sheila’s BIG MOVE, Threatens Katie Of Killing Her

The Bold And The Beautiful spoilers tease that Sheila will rattle Katie with her warning in the coming weeks. Could that be a death threat that will stun Katie and end up becoming Sheila’s number one enemy for now? Let’s discuss what will happen between these two and why Sheila will deliver a death threat to Katie.

Katie Decides Not to Ignore, Approaches Bill For Son’s Sake!

Katie made every possible move to help Bill understand his blunder. But he wasn’t ready to give up on Sheila just because his family wants him to. That too, the very same people who rejected him and made him change for the bad. The Bold And The Beautiful spoilers claim Katie won’t stop just because Bill asked her to leave. Even though she doesn’t want any kind of romantic relationship with Bill, that definitely doesn’t mean that she doesn’t care about him.

Apart from others in the family, Katie cares and has more rights on him. Since she has a kid with Bill, it is her duty to take care of the situation before it reaches Will’s ears. So, she will decide to try her best in convincing Bill how manipulative his new lover is. While Katie continues to make efforts to change Bill’s heart, will the she-devil just sit and watch the drama? Let’s discuss what will happen later.

The Bold And The Beautiful Spoilers: Sheila Corners Katie, Threatens To Kill Her!

Further on The Bold And The Beautiful, Sheila might get frustrated with Katie’s continuous efforts of getting a grip on Bill. The spoilers for the week of January 30-February 3, 2023, reveal that Sheila will corner Katie and deliver a disturbing warning. Katie will fret for her future after she sees Sheila’s evil side this closer. Chances are there, she might either warn her to leave Bill or might straight away threaten to make her disappear.

Once Sheila delivers a death threat, Katie might end up becoming Sheila’s number one enemy in town. Although her goal is to get back with Finn and Hayes, she definitely might decide to handle the hurdles first. Whatever the case, Sheila is going to unleash her wrath on Katie if she continues to put efforts into changing Bill’s heart. Stay tuned and watch The Bold And The Beautiful, it airs every weekday on CBS. For more updates and spoilers, visit our website, TV Season & Spoilers.