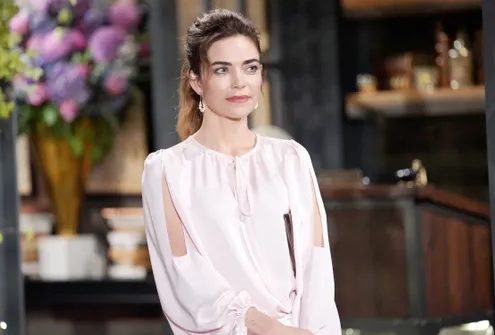 The Young And The Restless Recap For February 3, 2022: Victoria’s Business Meeting, Michael Goes To Peru, Adam Offers Sally A Job

The Young and The Restless recap reveals that Thursday’s episode of the CBS soap was full of family fun and drama. This episode was about family discussions, and some characters were still settling in with their new environment. First, Victoria had a business meeting with Victor and Nikki, while Michael was concerned about Ashland’s moves.

Viewers also saw Chloe helping Chelsea to start afresh. The February 3, 2022 episode also witnessed Adam offering a job to Sally, and Finally, Ashland made a declaration. What was all that about? Keep reading to find out.

The Young And The Restless: Victoria’s Meeting With Victor

Starting off the episode was Victoria having a business meeting with her father, Victor Newman. She informed Victor about Ashland going to Peru for his appointment with the Doctor who cured his cancer. Victor acted rather inquisitive about Ashland’s trip. Victoria didn’t like Victor acting all nosy about it, and she also declared that Ashland isn’t hiding anything.

While Victoria is with Victor, Ashland meets Nate Hastings and discusses how Dr.Hastings is thrilled over the job offer that Ashland offered him. Moreover, Ashland pointed out the miraculous treatment Nate recommended. However, Nate also admitted that he had concerns about this treatment, and he’s happy it worked for Ashland.

The Young And The Restless spoilers suggest that while Ashland and Nate speak, Michael will eavesdrop. Lauren caught him doing so. After that, Michael admitted to Lauren that Victor has doubts about Ashland’s miraculous recovery. He’s was also curious about how the non-profit clinic is being funded. Lauren got irritated and thought that Victor was setting Michael up to do all his dirty work.

Lauren also tells Michael that there isn’t ample proof to be suspicious about Ashland’s situation. But, Michael reminds his wife that Victor is always ahead of everyone. After Lauren leaves, Michael meets Nate

and asks about Ashland’s treatment. Nate tells Michael that it almost seemed too good to be true, but he was not doubtful about the recovery. Michael became more concerned after a phone call.

The Young And The Restless: Victor Sends Michael To Peru

Furthermore, Michael rushes to the Newman ranch after he meets with Nate. He mentions Nate’s “almost too good to be true” comment and how it has been bothering him since. Regardless, Baldwin doesn’t really understand the aim behind Ashland lying about his treatment. To which Victor was concerned, and Michael told Victor about the phone call he received. He told Victor that a shell company has been funding cash to finance the clinic’s operations, and the shell company has some evidence leading to Ashland.

Moreover, Victor finds it peculiar that Ashland would cover up funding for the same clinic that helped him recover. Then, Victor suggests that they will get all the answers at the clinic itself and asks Michael to go to Peru himself. However, Michael knows that Lauren won’t let him go without a fight, but he is curious to know about Ashland’s motives, so he agrees to go.

Later in the episode, Chloe helped Chelsea pack things up at the penthouse. Chloe also tells Chelsea that starting fresh away from Adam is the right choice to be made.  Then, Chloe and Chelsea meet Lauren and make a pitch to keep the momentum of the fashion platform going at Fenmore’s. Next, viewers also saw Adam meeting Sally and asking her how she was doing since she is no longer working at the fashion platform.

Sally admitted in front of Adam that she is worried about her future. Then, Adam offers her a drink at the Society Bar. While Adam parks the car, Sally meets Chloe and Chelsea, and she thanks Chloe for giving her a second chance. When Adam returns, he tells all the ladies that Sally will be coming back to Newman media to work for him. To which, Sally acted all excited and touched Adam. Although Adam is not sure what Sally’s job title will be, he feels confident that she’s an asset to the platform.

Back with Chelsea, she looked jealous when she saw Sally and Adam across the table. Chelsea got distracted from her presentation. But, Lauren liked their business plan, and she asked the ladies to send her the details. When Lauren leaves, Chelsea complains about Adam’s job offer for Sally to Chloe. But Chloe tells her to keep her eyes on the business plan with Lauren.

While leaving the bar, Sally wishes Chloe and Chelsea good wishes. Then, Adam and Sally head out to discuss the details of her new job. Chelsea riles up as she sees Adam and Sally leave together, but she thinks about the business plan more.

The Young And The Restless: Ashland’s Declaration

Rounding off Thursday’s episode was Ashland coming to Victoria’s office to discuss business. Ashland tells Victoria about how happy he is with the cancer recovery. Victoria also mentions how Victor asked all these questions related to Ashland’s recovery. Ashland told his wife that he has got the gift of life and he will never disappoint her. He somehow points out that Victor is the problem and that Victor doesn’t want them to be a good team. Ashland also declared that he would always be with Victoria no matter what happens.

Further spoilers reveal that Y&R characters are in for many confrontations in the upcoming weeks. What is that? Only time will tell. Until then, Stay tuned. TV Season & Spoilers will bring you all the updates. The Young & The Restless airs on CBS all weekdays.