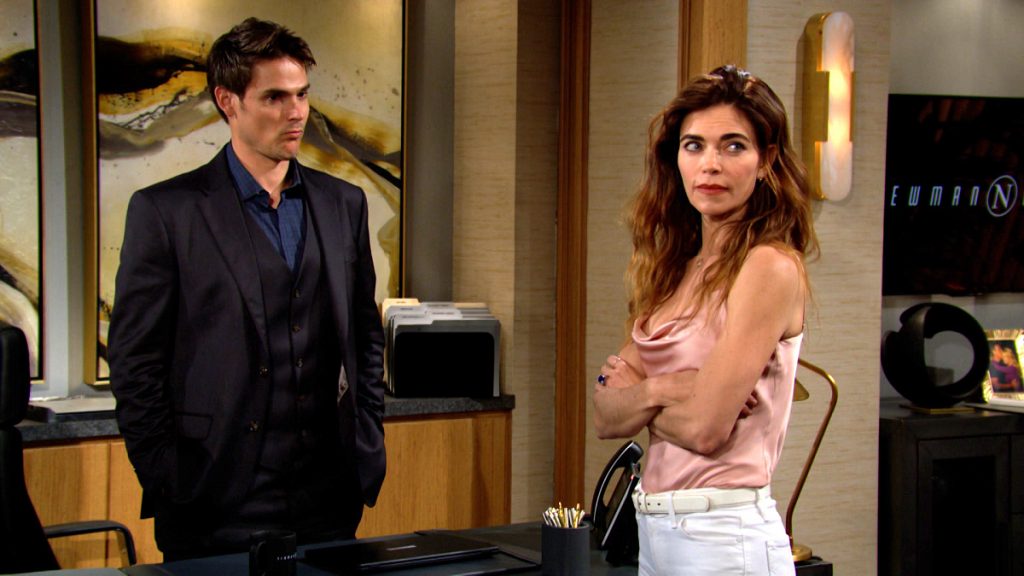 The Young And The Restless Recap For January 26, 2022: Newman Feud Continues, Abby Is Distraught

The Young and The Restless recap reveals that Wednesday’s episode of the CBS soap was full of family drama and action. This episode was about family disagreements and some characters were still struggling with their emotions. First, We saw a war brewing up between the Newmans. Viewers also saw Devon having his first-night visitation with Dominic at the penthouse while Abby was distraught. The January 26, 2022 episode witnessed Mariah and Tessa planning their wedding. What was all that about? Keep reading to find out.

The Young And The Restless: Billy Is Concerned

Starting off the episode, Billy suspects that Victoria is not letting go of her plan to acquire Newman Media. Meanwhile, Victoria felt like Billy was jealous of her. But, the truth is, Billy is genuinely concerned for her. Billy doesn’t want Victor to involve Victoria in his scheming and strategizing again. So, Billy warns her to be smart and walk away from this mess.

The recap also reveals that Victoria told Ashland about Billy’s run-in. Ashland wondered if Victor was keeping Adam in line with his offer, but Victoria thinks something else is going on.

Furthermore, in the Newman feud, Adam wanted to know what the probable sale of the fashion platform would mean for him. Victor thinks that Victoria will still keep Adam as the CEO. Adam got frustrated since he tried so hard to keep Newman Media independent. Adam feels like Victor is not approving of anything that he does.

Victor also admitted that he was disappointed with Adam over Billy’s fiasco. Victor keeps some things to himself, and Adam wants to find out what Victor has up his sleeves. Moving forward, At Newman Media, Noah dropped by Adam’s office. He told Adam why he chose to work for New Hope.

The Young And The Restless: Sally In Adam’s Corner

Later in the episode, Sally told Adam about Chloe and Chelsea signing the contract for their new lease. Adam admitted that he would miss Chelsea’s unexpected run-ins but refused to cancel the lease as it would help Chelsea move on. Adam h as more important things to worry about; Sally enquired about his conversation with Victor. Adam told Sally that Victor is thinking of selling Newman Media to Victoria.

Sally complains as she knows that Adam has always been loyal to Victor and asks him how he wants to handle this. Moreover, Adam admitted that he is not ready to be a subordinate to his sister. He mentioned how all this is a test to Victor, so; Sally tells him to go for it. Sally added that Victor would stop supporting Victoria after a while and leave Adam back in the lead position. Adam won’t be sure, but he thanked Sally for being on his side.

Next, Nikki got the information that Adam might come on board with the whole Newma-Locke merger. This will leave Nikki concerned. But, she will try to make peace. However, she will feel that Adam needs t be careful. Victoria also agreed that Adam needs to fix his attitude. She clarified that she doesn’t want to back down in front of her brother.

The Young And The Restless: Chance Opens Up To Abby

Then, At Chancellor mansion, Abby, with all the love, told Dominic that Devon wanted to spend more time with him. Then, Chance admitted to Abby that he had some nightmares last night. Now that Chance is trying to overcome his trauma, he’ll think that everything is coming to surface level.

In addition, Christine Williams came to meet Abby on Wednesday to look over the new agreement. Chance and Abby told her that they don’t have any second thoughts before Christine mentioned Devon’s other request. Abby was sad as she packed his baby’s things. Dominic will go for his first-night visitation at the penthouse.

Over at the penthouse, Devon told his sister Lily about the news of shared custody. He also added that Dominic would have Winters in his name too. Devon also thanked Amanda for having his back through the whole process.

The Young And The Restless viewers also saw Lily as she met with Billy at the office and they discussed how Victoria didn’t listen to Billy’s suggestion. Lily told Billy about Devon and Abby’s shared custody case, so they agreed that would have been difficult for Chance and Abby.

The Young And The Restless: Mariah And Tessa’s Planning

While Devon was thankful, Mariah Copeland informed Tessa Porter about the shared custody contract. Mariah also admitted that she is jealous, but she is glad for all the love that Dominic will receive around him. Then, Tessa bought Mariah a brownie. They also started discussing wedding plans. However, they will wait till Tessa’s meeting is over.

Rounding off Wednesday’s episode were Devon and Amanda arriving at Chancellor mansion to pick up Dominic. They told Abby and Chance to video call them while Dominic is staying with them at the penthouse. Abby was thrilled about it. Abby told Devon about everything she packed that included Dominic’s toy that he sleeps with.

After a while, Devon tells Dominic that he missed him; he’ll ask Dominic in a baby voice if he’s ready to go to Daddy’s home tonight. Devon referred to himself as “Daddy” in front of Chance.  When Devon left with Dominic, Chance hugged a gloomy Abby.

The Y&R spoilers reveal that Y&R characters are in for lots of discussion in the upcoming weeks. What is that? Only time will tell. Until then, Stay tuned. TV seasons & spoilers will bring you all the updates. The Young & The Restless airs on CBS all weekdays.