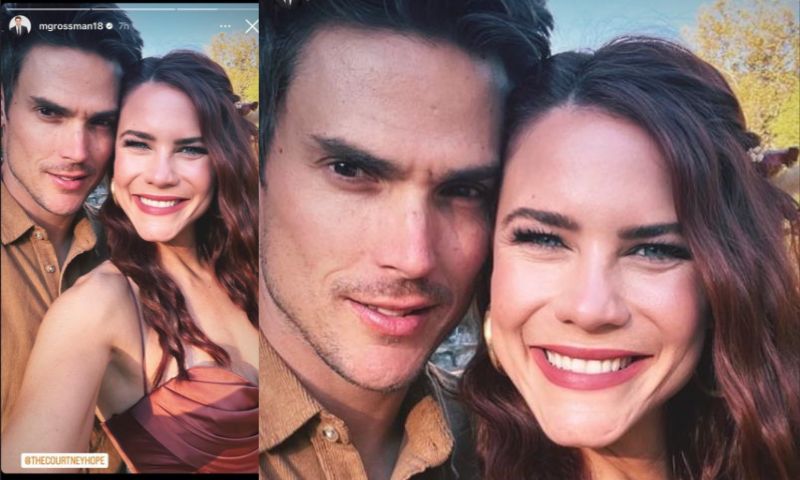 Social media had gone abuzz with speculations of The Young and The Restless co-stars Courtney Hope and Mark Grossman romancing each other not too long ago. The duo had attended the wedding of Courtney’s close friend who also happens to be the stylist for Y&R. Mark had posted a selfie with Courtney at the wedding, which she duly reposted on Instagram. Fans and followers soon started pointing out how their “chemistry” was evident in the picture. So has Adam and Sally’s romance spilled out of screen and enveloped Mark and Courtney? Let’s find out!

The Young and The Restless actress had a rather famous rom ance with actor Chad Duell. The couple eventually tied the knot of matrimony in a gothic theme wedding. However, their marriage ended in less than a year, for reasons best known to them. While the couple has remained quiet over the reasons of their separation, both have been vocal about moving on in life and rebuilding themselves. Chad shared his journey about making peace with the events, on Maurice Benard’s Youtube show. Meanwhile, Courtney took to her Instagram account to write a lengthy post explaining her experience of her marriage

ending and her transformation there on.

The Young And The Restless Love

Although Courtney has not spoken about finding new love, nor has she pointed to any official relationship with Mark Grossman. But, the picture Mark posted on his Instagram stories tells a different tale. The dynamic duo of The Young and The Restless can be seen dressed in costumes for Halloween! Mark wrote, “I’m a hot little potato right now” across the photo, which is reeking of couple energy! But, hey! Let’s just stick with “good friends” until they say otherwise! *wink wink*

However, there also is one big looming question! What happened to Sharon Case? For the longest while it was believed that Mark Grossman was dating his The Young and The Restless co-star Sharon Case. And their fans loved them together! While their counterparts, Adam and Sharon, remain star-crossed lovers on the soap, they were quite tight in real life. So what happened? If Mark is with Courtney now, then he and Sharon must’ve broken up. If that’s true then a lot of hearts will be broken as many loved the couple together.

Breakups and moving on is hard business, but if the people involved are happy in whatever their current status’s with each other is, then we are happy for them! But, what do you think is going on? Is Mark still with Sharon and just “good friends” with Courtney? Or have Mark and Courtney found love together? Please share your thoughts with us in the comments. Meanwhile, stay tuned to The Young and The Restless on CBS to find out who Sally chooses, Adam or Nick!