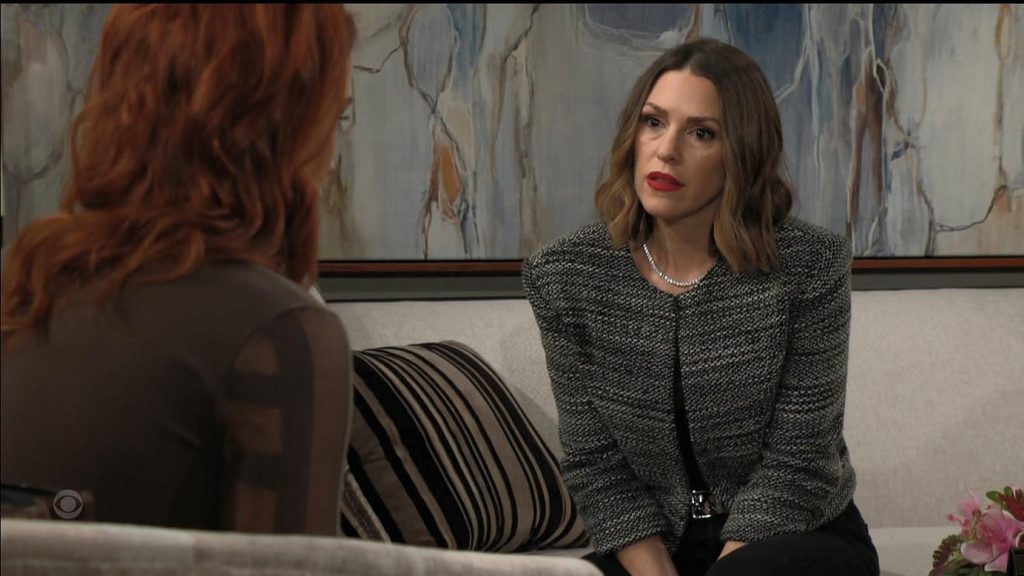 The Young And The Restless: Sally Hides The Paternity From Nick And Adam, Chloe Helps

Sally was continuously complaining to have a stomach ache in the show past few days. However, her friend, Chloe, later suspected that she might be pregnant. Given how she was behaving the past few days, Chloe suspected Sally might be pregnant. A point to Chloe because she knew it all. Chloe was indeed correct in her wild guess! The Young And The Restless then showed how Sally also thought that she might be right and decided to have a test.

As fans know, Sally’s pregnancy test showed positive, as she was actually carrying a baby. As for Chloe, she made sure if Sally was actually willing to get pregnant. But when she denied it, it was clear that the pregnancy was an accident. However, now both Sally and Chloe are wondering about the father. Since Sally slept with both Newman brothers, she doesn’t know if Adam is the father or Nick. For that purpose, it looks like Chloe will help her best friend find the answer to that confusion. But how will she do that? Let’s discuss that.

The Young And The Restless Spoilers: Chloe Helps Sally Find The Answers

As far as we know about Chloe, she just hates Adam so much so that she thinks he is a bad influence on Sally. So, the left is Nick Newman! The Young And The Restless spoilers say Chloe might now try to get Nick’s DNA so that they can match it with the child’s. For that, Chloe will need Nick’s hair or might try to get a glass from which Nick drank water. In soap, often, when a character is trying to be all sneaky, they usually end up getting busted! Will that happen with Chloe all?

Then there’s also a chance that the child might be Adam’s, and Chloe might help in tampering with the DNA results. It won’t be a surprise if the writers give this twist to the store since tampering with a paternity test is not a new storyline in this soap. Years back, Adam has also done that. Right now, Chloe knows Adam likes Sally and will go over the moon if she is carrying his baby. He will get another solid reason to be with her.

This is where she might get the idea of tampering with paternity test results. Whatever it is, Chloe will surely help her best friend in need. So, it will be interesting to see what it is exactly about. Stay tuned and keep watching The Young And The Restless every weekdays on CBS. For more updates and spoilers, visit our website, TV Season & Spoilers.