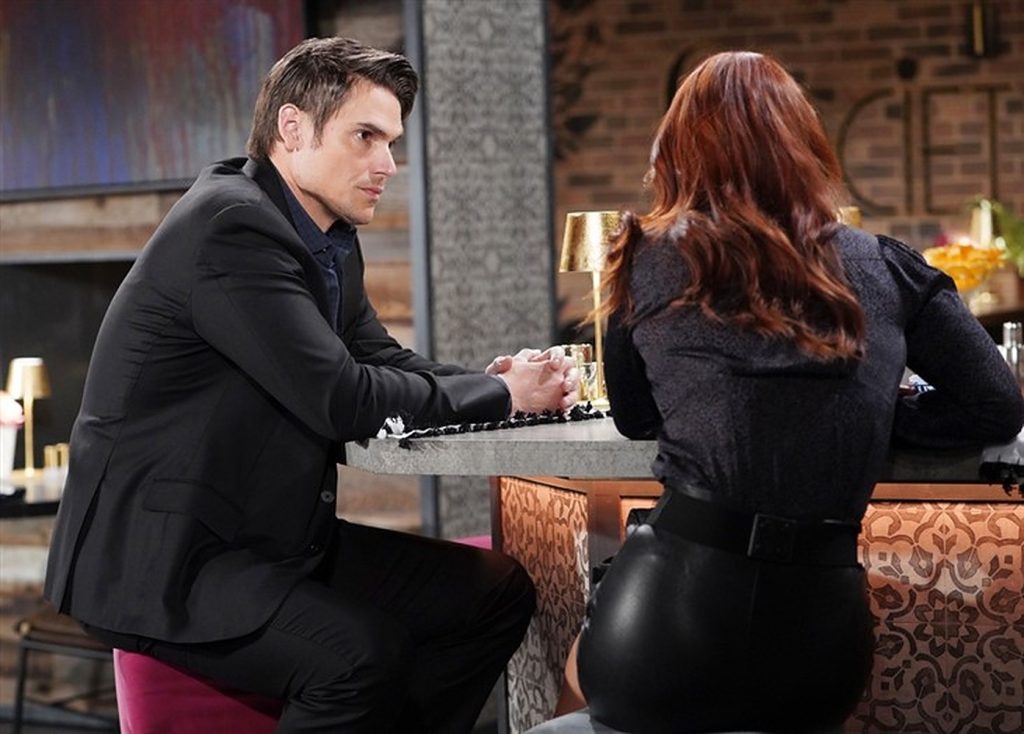 The Young And The Restless Spoilers For October 14, 2022: Adam Tricks Sally, Nate Comes Clean About His Plan

The Young And The Restless spoilers for October 14, 2022, tease that Adam will trick Sally into going out for a meal with him. But Nick will come right in time to sabotage their meetup, just like how Adam did. Over with Tucker, he will cleverly escape Devon’s accusation when Nate goes to confess something. Elsewhere, Nate will cry out to Elena and try convincing her to get back with him. Keep reading to know what happens in today’s Y&R episode.

Nate Cries To Get Elena Back In His Life

On Friday, Nate will again approach Elena. This time, he will have an important update to share. Nate will admit that he confessed his takeover scheme to Lily and Devon for Elena’s sake. Since Elena was upset with his new version, he’ll admit that he would also like to return to the way he was. Naive and gentle, someone who never thought evil for others.

However, Elena will be more interested in why Nate mentioned her name. Elena just wanted to make Nate realize what he is doing. Even though he did right by confessing the truth, he should have done it for his own sake and not for Elena. At the end of the day, he was the one backstabbing his family, so it’s his duty to come clean to them. When Nate realized that Elena is not convinced yet, he’ll break down and cry for another chance. He will not want her to leave Genoa city but stay with him forever.

Unfortunately, the spoilers claim that during the week of October 17-21, 2022, Nate and Victoria will again scheme together. As far as the confession of takeover is concerned, spoilers already informed that Nate did not confess anything like that to Lily and Devon. He did go to confess, but it was about his small betrayal and not the ultimate takeover plan. So, it is given that Elena will stick to her decision of leaving Nate.

T he Young And The Restless Spoilers: Devon Confronts Tucker; Jack Is Worried For Ashley

Further on The Young And The Restless, Devon will confront Tucker. He will want to know whether the reason for him to return to GC was for Chancellor-Winters. Once Devon discloses Nate’s plot, he will doubt that Nate might be the one who brought Tucker to become the CEO. However, Tucker will completely deny it. And for a rare instance, he won’t be lying. The Young And The Restless spoilers claim that it is not Nate who works for Tucker but Audra. So, he will keep that under wraps.

While this confrontation is going on, someone will be waiting for Tucker across the town. None other than Ashely. Ashley will get frustrated with the delay. After so many pleas, Ashley finally agreed to have dinner with Tucker. But he will be missing. More-related spoilers suggest that Jack will wonder why Ashley is being so flexible for Tucker. First of all, Jack will wonder why she is even paying attention to his approaches. However, Jack doesn’t know that Ashley is actually playing a crucial role in Nikki and Phyllis’ plan. On one side, she has to find dirt on Diane through Tucker, and on the other, she has to be careful with Tucker. So, Ashley will be sandwiched in between, having no way to escape.

On the Grand Phoenix rooftop, Adam will somehow trick Sally. He will get her agree to come have dinner with him. However, looks like Nick will follow Adam’s footsteps and become the date crasher. Technically, it won’t be a date but rather a meetup to discuss their relationship and a possible reunion.

Speaking of Nick, he would rather feel that Adam is crossing his limits. But when he notices Sally’s expression, she won’t be that upset. Other spoilers say that Nick will soon confront Sally about her feelings for Adam. Stay tuned and watch The Young And The Restless, it airs every weekday on CBS. For more spoilers and updates, visit our website, TV Season & Spoilers.