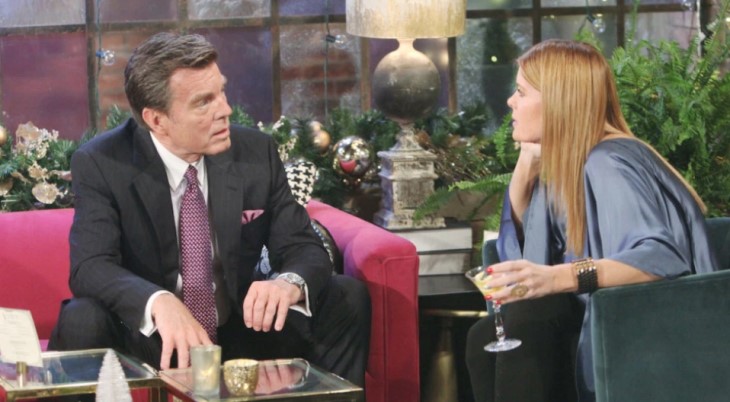 As Thanksgiving is around the corner, The Young and the Restless spoilers suggest that some drama will undoubtedly happen. There is a possibility of Chance’s return on Thanksgiving. Spoilers also reveal that Jill will probably save ChancComm amid all the chaos. Hence, viewers can expect some classy action on its way.

More spoilers suggest that Gloria will be back in the town and cause chaos, whereas Kim might reveal Ashland’s dirty secrets on Thanksgiving. While everyone will be busy with their external problems, Phyllis will be dealing with her feelings for Jack. And hence, she might confess to Jack. How will all this take place? Here’s everything to know.

The Young And The Restless: Kim Meets Victoria, Exposes Ashland.

The Young and the Restless spoilers suggest that the viewers will find all the answers to Ashland’s dirty past this Thanksgiving. Kim is debuting on the soap soon, and spoilers indicate that she will have the key to Ashland’s secrets.

The viewers are well aware of all the fuss related to Ashland’s past. Billy wanted to expose Ashland’s history, but he instead fell for a bigger plan that Victor created for him. So, no one actually knows who Ashland is? What was his past? or is he even lying about his own disease?

Also, Roxanne Hart is going to debut as Kim. So, there is a possibility that she will enter the scene when Victoria and Ashland will be talking about their future. Hence, Victoria will definitely ask Ashland about Kim. But, viewers know that Ashland is really good at manipulating. So, he might succeed in handling Victoria now, but Kim will definitely reveal his secrets to Victoria. Looks like Ashland won’t be much thankful on Thanksgiving. Will Victoria listen to Kim? Only time will tell.

Since Thanksgiving is all about spending time with your loved ones, it seems like everyone in the Y&R family will spend time with their family, including Abby. The Young and the Restless fans who have been keeping up with the soap know that Chance’s presumed death has shattered Abby. She had been struggling really hard to accept the reality. But her heart always believed that Chance was alive. And It looks like she was right.

Abby’s terrible time will be finally over, and the Y&R fans will see the beautiful smile on her face again. The Young and the Restless spoilers suggest that Chance is on his way back home and will soon arrive in Genoa City. It seems that he will come at Thanksgiving, and finally, Abby will have something to be thankful for.

The Young And The Restless: Mariah’s Breakdown, Devon Fights For Dominic’s Custody

Further, The Young and the Restless spoilers suggest that Mariah will soon face a breakdown. Mariah has been struggling with Abby’s decision to give Dominic to Devon. Mariah is troubled about why Abby didn’t choose her to look after Dominic in her absence. Tessa will try to convince her, but she won’t listen, and hence Tessa will ask Noah to calm Mariah down.

However, Devon will face another dilemma as Chance is going to arrive soon. Since he is coming back, he will take Dominic away from Devon. Devon has gotten attached to Dominic way too much in the past few months, and now even the idea of separation will fall him apart.

More spoilers suggest that the idea itself will make Devon decide to fight for Dominic’s custody. Hence, there is a possibility that Devon will fight to become Dominic’s official father soon, whereas Mariah will fall apart around Thanksgiving time. Will Mariah fight with Devon?

The Young and the Restless viewers know about the tragic ending of Phyllis and Nick’s relationship. Hence, Phyllis will be a little conscious before going on the same path with Jack. But Phyllis has started thinking about Jack a lot lately.

Also, Celebdirtylaundry.com reveals that after Phyllis had met Jack at the coffeehouse and returned to The Grand Phoenix, she realized that she still loves him. Spoilers also suggest that Phyllis will think about Jack and how he has always been there for her.

Jack always wanted a lifelong partner. So, will they involve in a romantic relationship? It seems like Phyllis might confess about her feelings for Jack on Thanksgiving. No wonder Jack will be on cloud nine after that.

The Young And The Restless: Jill Saves ChancComm

The Young and the Restless spoilers suggest that after Jesse accuses ChancComm of defaming Ashland at the press conference, Lily will be concerned about saving ChanceComm. Hence, she will make a distress call to Jill Abbott. More spoilers suggest that Billy will be annoyed by Jill’s decisions, but he won’t have any choice left.

ChancComm is in urgent need of redemption, and there are chances that Jill will arrive as soon as possible. Moreover, it looks like she might find a way to save ChancComm by Thanksgiving. Will Jill be able to destroy Victor’s plan? Let’s see.

The Young and the Restless spoilers suggest that Gloria Abbott Bardwell is expected to arrive at Thanksgiving. Gloria is a recurring character, and the last time she appeared on the soap was in August 2021. She has a troublesome personality. Hence, as she returns, she will undoubtedly create some chaos on Thanksgiving.

More spoilers suggest that just like every year, Sharon will provide a Thanksgiving dinner to the homeless people at Crimson Lights. She will also meet some familiar faces there who will help her to distribute the food. The Young And The Restless Thanksgiving will be full of unexpected arrivals and drama. So, be sure to tune in and enjoy. For all the updates and news about Y&R, Tvseasonspoilers.com is your one-stop destination.