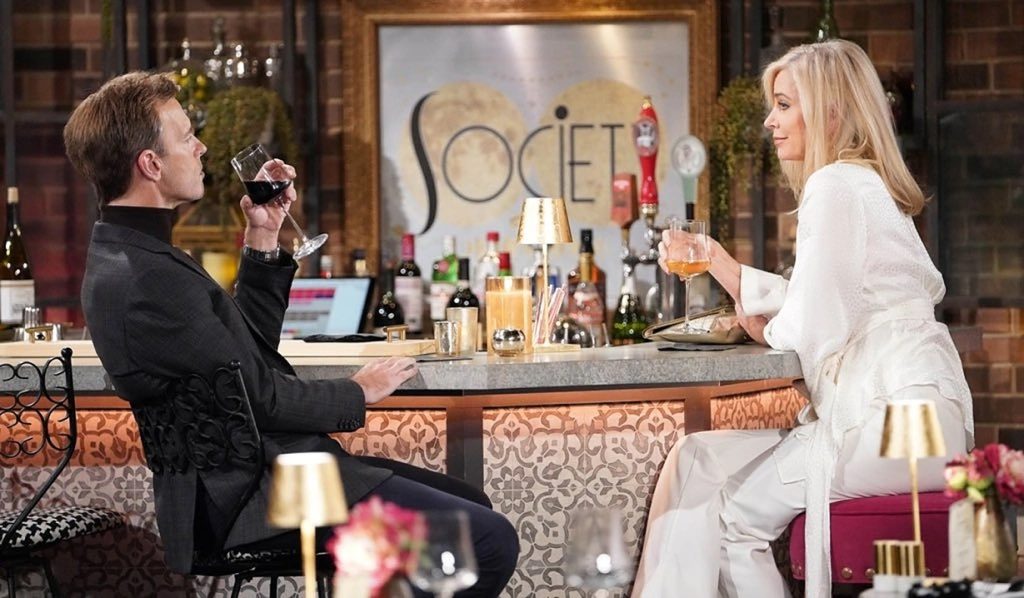 The Young And The Restless: Tucker And Ashley Team Up FOR REAL! Take Over GC

The Young And The Restless spoilers tease that Tucker might start preparing for his final business attack in Genoa City. Along with him, Ashley might also sign up to be with him in his takeover plan. As doubted earlier, Tucker had come up with an ultimate takeover plan, and for that, he will need to manipulate Ashley against her own family. Looks like he will succeed in it. Keep reading to know how Ashley and Tucker might team up in the near future.

Tucker’s dramatic helicopter entry made everyone lose their mind, especially Ashley’s. Even though she wasn’t there to witness it by herself, she did get the intel. Tucker is a character who has a not-so-good past with most of the people in Genoa City. It was pretty obvious for everyone to think about the reason behind his sudden arrival after ages.

However, The Young And The Restless recently revealed Tucker’s motive and ultimate takeover plan in their episodes. Looks like Tucker wants to take over both Chancellor-Winters and Jabot. He wants to take the entire empire, basically, get control of more than half of Genoa City’s business. For that, he tried asking Diane for help with scoring Jabot’s financial info, which she wasn’t able to do it. However, he didn’t stop there. Given how Tucker is, if he wants to achieve something by hook or crook, he will make that happen.

Since Jabot is Ashley’s family company, he would need to make Ashley go against her own family. As of now, we know that Tucker is trying to get a chance from Ashley. Well, looks like Tucker thinks if anyone can run Chancellor-Winters, it has to be Tucker and Devon. He won’t leave her alone. Instead, he wants her to run Jabot. Now in all this, fans know that Ashley is trying to trick Tucker for Diane’s intel. And she certainly doesn’t want to make things worse, will Tucker be able to manipulate Ashley into his trap? Will she go against her own family for Tucker? Let’s discuss that.

The Young And The Restless Spoilers: Ashley-Tucker Come Closer, A Possible Team-Up To Happen?

As mentioned before, Tucker is hell-bent to get Ashley back in his life. For that, he is doing everything possible to make her fall for him again. For instance, Tucker recently gave her some crucial Diane intel which will drive her away from Genoa City. The Young And The Restless spoilers tease that Tucker might soon succeed in his plan to get Ashley back in his life.

Fans might have noticed the time when Nikki and Phyllis forced Ashley to keep the door open for Tucker. At that time, the only thing she was worried about was her feelings. Ashley was scared that she might again fall for Tucker if she is not watching her steps. What does that mean? Even after so many betrayals, Ashley still has some feelings for him that even she can’t resist. As for Tucker, the show re-casted another actor a bit younger than the previous one. Also, Tucker has his own charm, which makes Ashley fear for her future and feelings.

With all these hints, it is clear that something is to happen, and that might be Tucker and Ashley coming closer to each other. Tucker also helping in Diane takeover mission might ultimately impress Ashley. Well, if Ashley goes into the same trap, then it won’t be easy to back off from it. This might be the chance when Tucker will use her for his ultimate takeover plan. As for Ashley, she might also get blindsided with her love for Tucker and do exactly what Tucker wants her to do. She might go against her own family and Jack to help Tucker fulfill his dream. It will be really interesting if the story takes this turn. Stay tuned and watch The Young And The Restless, it airs on CBS. For more updates and spoilers, visit our website, TV Season & Spoilers.