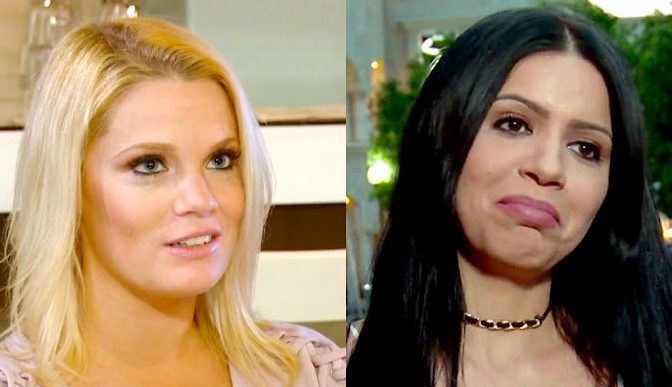 '90 Day Fiance': Have Larissa, Ashley, Leida Made It The Worst Season Ever?

Undoubtedly, fans prefer drama over plain old and boring 90 Day Fiance storylines. But Leida, Larissa, and Ashley along with their men have been in the bad books for a long time. Fans are literally fed up of the trio with their respective SOs. Every other day, the internet is filled with hideous news about one of these couples. Most of the fans have stated that this has been the worst season of 90 Day Fiance till date.
The situations of the above-mentioned couples are now beyond any kind of repair. Moreover, the constant feuds these people are involved in has created a sense of monotony. Fans are now bored of the constant lame gossips and have stopped caring about the most part of it.

This is not an act – this is scary. #90DayFiance @laricrisjohnson pic.twitter.com/WYHRFLUtbs

The recent incident of physical violence was probably the final blow the couple needed to part ways. Coult has filed for a divorce after a series of accusations and they have decided to call it quits. Apart from the fans, even Colt’s mother Debbie is fed up of all the drama. She made it clear when she paid for the divorce. Colt has also charged Larissa of implicating domestic violence. Her hearing is on 12th February. Fans have to wait and see how these charges interfere with her future in the States.

Colt Decides To Move On From The Drama

Just like fans all over the world have almost stopped caring about the drama, the same goes for Colt Johnson. He has made a new Instagram account with posts indicating some soul searching. It indicates that the software engineer is away from all the drama

and is ready to move on to new ventures life has to offer.

https://www.instagram.com/p/Bs1ud1aAk4O/
Despite the couple saying that the show has ruined their reputation, there are police records and medical reports against Leida that indicate it’s not all a made-up plot. Tania, Eric’s ex-wife says that Leida is his last shot to love. However, the allegations tell a completely different story. Eric has been keeping Leida as her top priority but after the drama, tables have turned.

https://www.instagram.com/p/BslzkPXHjtV/
If we talk about the couple surrounded by the highest number of controversies, Jay and Ashley are going to take home the prestigious award. Starting with Jay’s cheating behavior, the couple has crossed limits of altercations. After Jay threw Ashley under the bus by saying that he wasn’t the only one who cheated has brought them massive attention. But his sympathy towards Ashley during her health issues have confused the fans. It is not clear whether the story is real or a gimmick to stay in the headlines.
There is nothing worse than reaching the saturation point of something. This is exactly what has happened to the fans of 90 Day Fiance. Who do you think takes the crown of the most hated couple on the show. Let us know in the comments below.