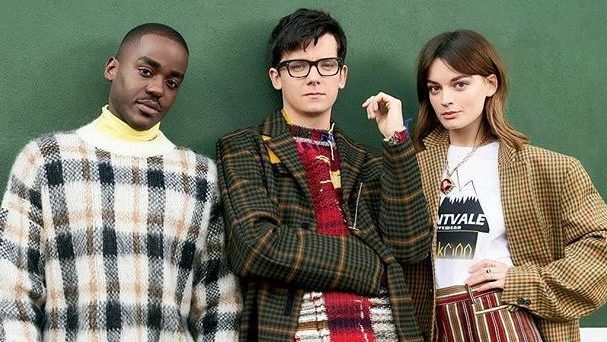 Sex Education Season 2 is arriving soon at our screens again. Cast members have finally finished shooting for the installment. One of them hints that S2 will be ‘mischievous.’ Fans are excited to know what happens next in the series. Moreover, it’ll be interesting to see who finally ends up with Otis in the future. As of now, we have a bunch of things that you need to know about the latest season.
Netflix’s pop show debuted back in January 2019 and took no time to win our hearts. The series went on to become a fan-favorite aside from the praise it received from the critics. The sex comedy revolves around Otis, a socially awkward high school student. Bothered from the fact that his mother is a professional sex therapist, he is still ambivalent about sex. Inspired from his communication skills, a fellow classmate, Maeve, pushes him to start sex therapy at school.

Sex Education turned out to be a massive success for Netflix. Hence, the streamer took no time to renew it for another run. The renewal was announced a few weeks after the Season 1 premiere. Fans were relieved that their favorite show will be back for a second installment. The streamer released a funny video of Otis to announce the news.

The second season of Netflix’s ambitious show took a while to get into productions. Cast members were called in to read the scripts back in May 2019. The filming began soon after the same. Moreover, the streamer gave us some insight into Sex Education Season 2’s script reading session. The video features the actors reacting to the script for the first time.

The cast members have finally finished shooting for the second installment. Lead actor Asa Butterfield previously revealed that they’d soon conclude filming for Sex Education Season 2. On the other hand, he expressed that he can’t wait for fans to see what mischief Sex Education characters will bring upon this time.
As of now, Actor Alistair Petrie, who plays the role of Moordale’s headmaster Mr Groff, finally confirms that the productions are officially wrapped. Moreover, the release date will soon be out as well. Petrie uploads a cheerful picture of the entire cast and crew of the series on his Instagram. Netflix UK later reposted the photo on their social media.

Sex Education Season 2: Ola Or Maeve, who should end up with Otis?

Season 1 of Sex Education left us hanging on a crazy cliffhanger. We were all rooting for Maeve and Otis since the beginning of the show. However, he ends up choosing Ola. While some of the viewers are happy about his decision, others still hope for the lead characters to reconcile. Who do you think should end up with him?

It felt weird. I wished for Ola and Otis to end up together but was broken hearted when they actually did at the end of the season. I need more #Maevis in Season 2 so please let there be season 2. #sexeducationseason2

When Will Season 2 Be Back On Netflix?

As of now, Netflix is yet to give us a firm release date. Cast members have finally wrapped up the productions now. Hence, Sex Education Season 2 will now go into a few months of post-production. The first season of the series debuted in January 2019. Thus, chances suggest that the second installment may also premiere around the same time, that is January 2020. However, a December 2019 release date is not impractical either.