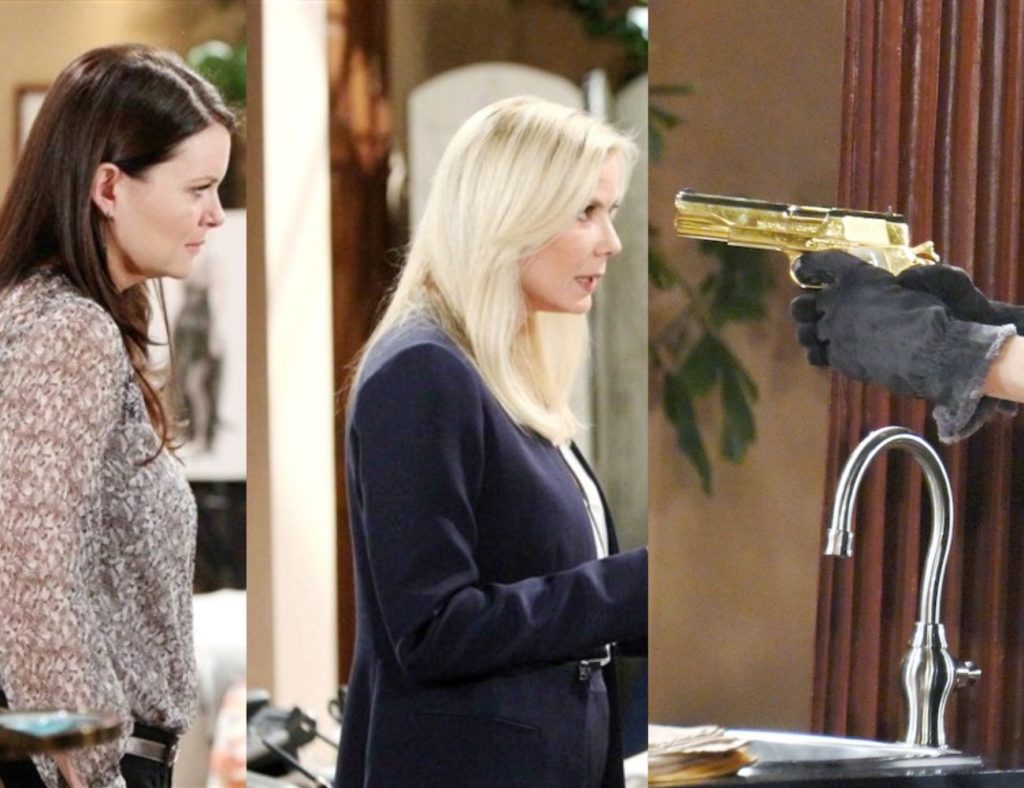 The Bold And The Beautiful: DOUBLE MURDER Plot, Sheila Targets Brooke And Katie

Sheila is hell-bent on having a long-lasting association with Bill Spencer on The Bold and The Beautiful. She made it clear to Deacon that she intends to spend the rest of her life with Bill. However, it’s pretty clear Sheila wants that more for power than love. And that is something everyone can see, minus Dollar Bill. Having pretty much everyone against her relationship with Publishing Mogul certainly isn’t helping Sheila. The biggest roadblocks in her way right now are the Logan sister, Brooke, and Katie. Will Sheila finally reach a boiling point and decide to KILL them off? Keep reading to find out!

Brooke and Katie Refuse To Back Down

Whether Bill accepts it or not, he is being played on The Bold and The Beautiful. Sheila Carter is taking advantage of whatever it is that Bill is going through right now. Absolutely every single person on the soap and on the other side of the television screen can see it! Bill’s whole body language is screaming for HELP! But, Bill is still choosing to silently stand behind Sheila and let her do all the talking. Recently, Brooke picked on Bill’s silence and questioned him if he will really let Sheila speak for him. Yet, Bill said nothing! Not even to his beloved Brooke!

This just made it all the more evident to Brooke and Katie that Sheila is somehow controlling Bill on The Bold and The Beautiful. Katie confided in Carter that she feels Bill is completely under Sheila’s spell. If the Logan sisters put their heads and strength together, it is only a matter of time before they come up with a solid plan to rescue Bill. Even when Sheila told them off and made them leave the Spencer Manor, Brooke and Katie looked determined to continue their efforts to somehow make Bill see reality. There is no way the Logan sisters will leave Bill to suffer in Sheila’s claws.

It is absolutely not possible that Brooke and Katie trying to persuade Bill was a one-time thing on The Bold and The Beautiful. They both have a deep history with Bill and they genuinely care for him. We don’t see them backing down from their rescue mission. But Sheila can’t have that, can she now? If there is anyone who can dissuade Bill from Sheila, it’s Brooke and Katie’s love. Eventually, Sheila will start to feel threatened by Brooke and Katie’s connection with Bill. She knows that all her plans of ruling the future depend on Bill’s support and dollars!

There is no way Sheila can risk losing Bill on The Bold and The Beautiful. Although she knows that she needs to stick to the right side of the law to avoid going back behind bars, can she really do it? Sheila is clearly not known for her patience and restraint. If Brooke and Katie push her too much, she might go over the edge and decide to “take care” of the sisters for good. Sheila may start to feel that the only way to keep Bill with forever is to permanently remove them from the equation.

The murderous diva will probably be tempted by her old ways and hatch a plan to kill Brooke and Katie. With access to Bill’s dollars, it won’t be that difficult for her to hire a gun to do the dirty job! The latest spoilers reveal that Sheila will threaten Katie. Perhaps the fire is already building up! Stay tuned to CBS over weekdays to find out Sheila’s next move on The Bold and The Beautiful.