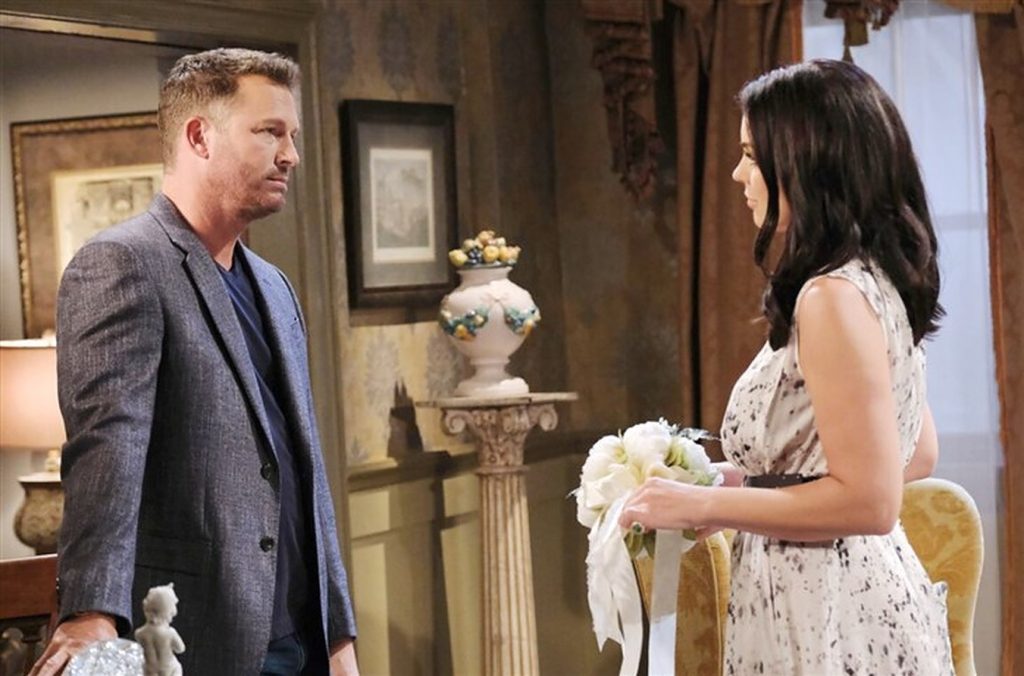 Days of Our Lives spoilers for the next two weeks, October 10-21, 2022, tease that Brady will bargain with Kristen for the Orchid. This means a possible slip between Brady and Chloe is going to happen in the upcoming week. Over with Sloan, once she provides the incriminating file, Paulina will contact her PR team to seek help, and this all is going to get very interesting.

During the week of October 17-21, 2022, John will plan to finish off Kristen, but Brady will stop him. Next, Stefan will prepare the divorce papers for Gabi. Elsewhere, Tripp and Johnny will have a face-off where Tripp will punch Johnny. Let’s read further to know what happens next in DOOL in the upcoming weeks.

This week, Wendy Shin will arrive in Salem and come across Johnny. Days Of Our Lives spoilers say that Wendy and Johnny will realize that they both have the same goal. So, they will team up to take down DiMera together. After EJ exposed Ava, Johnny noticed that his father was just concerned about his business and not really about his son. So, he will want to take revenge on his father for that.

Elsewhere, Marlena, Kate, and Kayla’s health will deteriorate even further. Days of Our Lives spoilers also suggest that Tripp and Joey will join Stephanie and Steve to be with Kayla in this tough time. At this time, Roman will pop out a beautiful ring for Kate and propose to her for marriage. Of course, Kate will accept his love and ring even though she knows that she has got less time.

Now that all three hostages’ health is worsening, Brady will have no choice but to approach Kristen. He will bargain with her to give him the Orchid. As he tells her that he is ready to do anything, Kristen will know just what to ask from him. Of course, Kristen will want Brady to break up with Chloe.

Next, After a client hands out some crucial evidence to Sloan, she will head straight to blackmail Paulina. Initially, she will think that Sloan might just be bluffing. But, when she shows her the incriminating file, Paulina will fear for her upcoming election. Later, Paulina will contact her PR team and tell them about how Sloan has given her 24 hours to respond.

Since the PR team consists of Chad and Stephanie, their romantic evening will get derailed by her call. Speaking of Paulina, she will confront Chanel and ask her about her crime. Once Chanel learns about the hidden truth, she will cry out and say that it is something that she did back in college.

Days Of Our Lives Spoilers For The Week Of October 17-21, 2022: Eric-Nicole’s Photoshoot

During the week of October 17-21, 2022, tease that Eric and Nicole will have their photoshoot. Days Of Our Lives spoilers say that once Nicole asks Eric to help her with modeling, he will agree. However, there will be some unexpected visitors. Jada and Rafe will witness Nicole and Eric’s cozy photoshoot. Of course, seeing them this close, Jada and Rafe will both be pissed off. In fact, Rafe will also want Nicole to fire Eric.

However, Nicole tried hard to get Eric in her orbit. So, she certainly is not going to leave this chance. Other spoilers claim that Nicole will dodge that question by accusing Rafe of overreacting. What will Rafe do now? We will know that in the upcoming episodes.

Elsewhere, EJ will confront Johnny, who will be roaming around in the office. Speaking of Johnny, Tripp will punch him for having romantic feelings for his mother. However, Tripp’s mother, Ava, will be busy convincing Gwen to support her in her revenge scheme against EJ. Once Gwen advises her not to stoop low, Ava will know that Gwen won’t be helpful anymore.

So, her next chance will be to approach Xander, who will be busy buying a house with Sarah. At the hospital, Kate’s health will worsen. On the other side, Kayla will succumb to the toxic substance spreading all over her body and will go to heaven. However, Days of Our Lives spoilers say that she will return to life since it’s not her time. Thanks to Brady, who agreed to Kristen’s deal and got the Orchid. So, looks like the cure will work wonders and save the lives of all the former hostages.

As for Brady, he will still be in trouble. Since he has agreed to split up with Chloe, he will fret over her getting closer to Stefan. Since the day Stefan returned to the land of the living, he is chasing Chloe. So, Brady will fear the chances of Chloe going back with Stephan.

Speaking of Stefan, he will prepare the divorce papers for Gabi. Once he settles down with legal separation, he will chase Chloe wholeheartedly. With all the chaos surrounding Brady, his father, John, will devise a sinister plan. Instead of bowing down to what Kristen wants, John will plan to just finish her off. So, Brady will block his father’s plan and will ensure that he can take care of it. Stay tuned and watch Days Of Our Lives which airs every weekday on Peacock+ in the US and on The W Network in Canada. For more updates and spoilers, visit our website, TV Season & Spoilers.