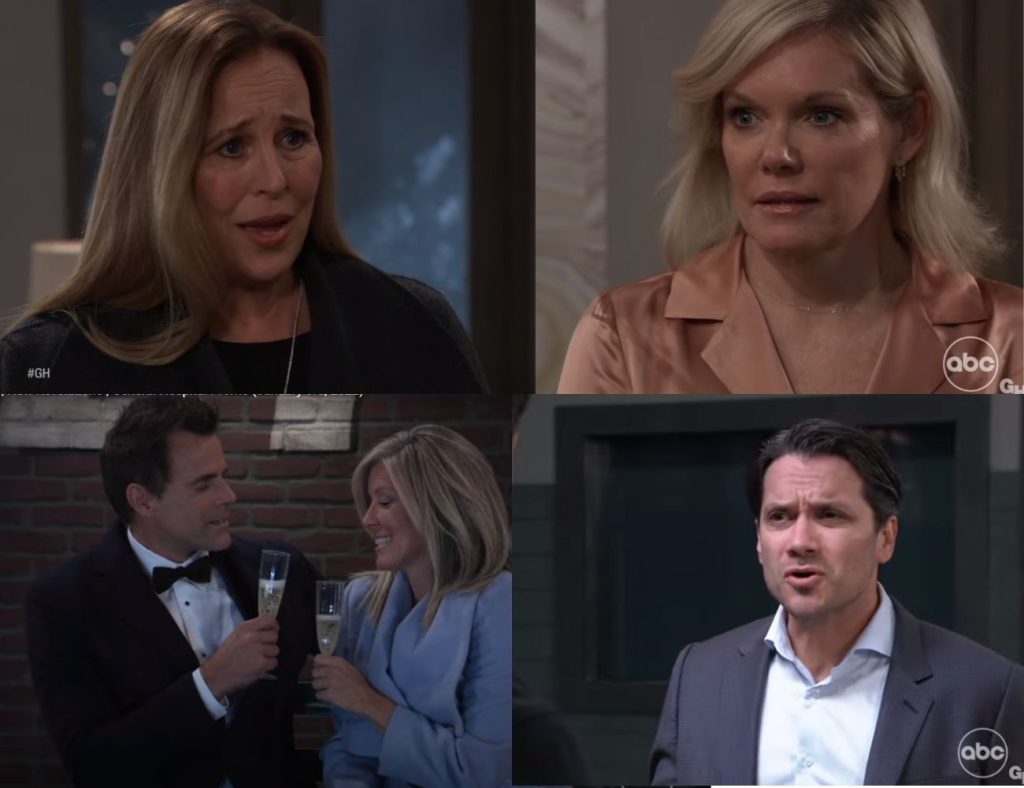 General Hospital Preview Video For The Week Of January 2, 2023: Hook’s Identity Is REVEALED, Laura Is On A Chase

General Hospital Preview Video For The Week Of January 2, 2023, opens up on a celebratory note as Carly and Drew ring in the New Year together in a romantic setup. Joss’s life hangs in the balance as the Hook Killer strikes again. Meanwhile, Britt seems to have landed herself in a cutting situation. On the other side of Port Charles, Dante is reeling in frustration over the increasing victim count of the Hook Killer. Whereas Laura puts Ava on the spot about what she knows about the info Victor is holding on to. Looks like a thrilling week awaits us ahead on General Hospital this week!

While speculations are in full swing that Carly and Drew’s relationship is doomed at General Hospital. Drew is on the hunt for locating Willow’s birth family, while Carly is relentlessly throwing wrenches in his search. Once he learns that Carly has betrayed him by keeping the truth from him, he is sure to walk away from her. But that is a problem for another day! The General Hospital preview video for the week of January 2, 2022, reveal that the two secret lovers will celebrate New Year’s Eve in a romantic party for two. Raising glasses of Champagne and eye gazing. They are truly a sign for the eyes in the preview.

Meanwhile, in a more gory turn of events, the Hook Killer is out on the prowl again on the pier. The General Hospital preview teases that the latest victim on the killer’s list is in Joss. However, just as the psychopath raises the hook to slash Joss, Britt intervenes. Are we about to have another Brando situation here? Is Britt going to be collateral damage as Joss escapes yet again? Killing Britt would be the perfect way to tie up the end of Kelly Thiebaud leaving General Hospital. Stay tuned to the upcoming episodes to find out what happens next!

The Port Charles Police Department recently lost one of its own on General Hospital. Rookie Cop Rory Cabrera landed himself in a fatal mess when he endeavored alone to trap the Hook Killer. However, sadly, the Hook Killer got the best of Rory and ended his life with one swift poisonous slash. Understandably, this has left Dante on edge. The GH preview video shows Dante irritably retaliating that he and the department have a string of murders to solve, and he needs answers. Dante will surely get a punch in the gut when he learns another body has fallen, courtesy of the Hook Killer!

On the other side of Port Charles, PC Mayor Laura corners Ava Jerome. Laura knows something is fishy, but not exactly. However, the General Hospital Preview Video For The Week Of January 2, 2023, reveals that she has every intention of finding out what’s going on in the Cassadine Castle. Laura goes up to Ava straight and demands she tells her whatever she knows about what Victor has on her son, Nik. Ava is taken aback by Laura’s line of questioning. Will Ava tell Laura what she knows?

Meanwhile, Liz gets some shocking information on the phone. General Hospital spoilers reveal that Esme will take a leap from the parapet at Wyndemere into the icy waters below. What will Nik and Liz do now? Will Esme and the baby survive the fall? Phew! Too many intense storylines going on! We are all sure to be on the edge of our seats this week. Which of the above stories are you most looking forward to? Please tell us in the comments. Meanwhile, stay tuned to ABC for the latest episodes of General Hospital.