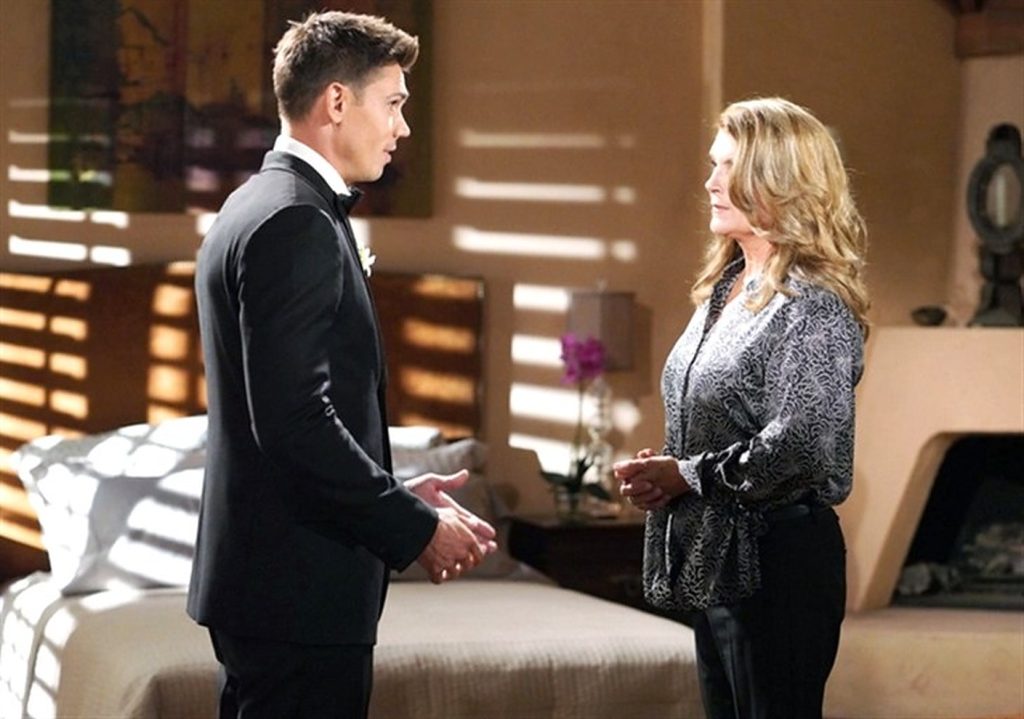 The Bold And The Beautiful Spoilers For The Next Two Weeks (January 23-February 3, 2023): Finn MEETS Sheila, Thomas RETURNS To Business

The Bold And The Beautiful spoilers for the next two weeks, from January 23 to February 3, 2023, reveal that Sheila will cross paths with Finn. Of course, Finn will deliver a warning that Sheila is going to ignore. On the other side, Hope’s fashion line will get some awful reviews which will lead to a serious argument between Steffy and Thomas. While Thomas will want to join the fashion line, someone unexpected will come to support him.

During the week of January 30-February 3, 2023, Katie will make a plan to take Bill out of Sheila’s fake relationship trap. However, her plan won’t go well since Sheila will soon corner her. Taylor will also have a major confession to make to Brooke. Is there another crime that she is hiding from everyone? Keep reading to know what is brewing in B&B in the coming weeks.

The Bold And The Beautiful Spoilers For The Week Of January 23-27, 2023: Bill Asks Brooke To Leave

First, Bill will agree with Brooke that he, indeed, is turning his back on his family. However, he will reassure her that he is not going to change. The Bold And The Beautiful spoilers reveal that Bill will continue to reject Brooke’s warning and will admit that he only loves Sheila and won’t change his heart for them. Once Brooke realizes that things have gone beyond repair, she will decide to leave his place.

Later, Brooke will have bad news for Liam and Hope. She will narrate how Bill wasn’t interested in listening to her. While Hope mulls over the threat Sheila possesses, she will also have to think about her fashion line. The spoilers say that Hope’s business will face a serious hit. Now that Thomas is gone, his designs will also be out from line. Hope will get some awful reviews on her designs and will decide to pitch a new proposal to Steffy.

Looks like Steffy will reject Hope’s proposal, which will put her into more trouble. Then, Thomas will get updates on the line failing to meet the quality production. Since the line is facing such criticism, Thomas will decide to make a comeback. However, it won’t be that easy since Steffy won’t allow him to slide in. Spoilers say someone unexpected will support Thomas, and it will be Paris, who will know that it is time to bring back Thomas and save the business.

Over with Deacon, he will finally manage to buy II Giardino for his business. Hope will be proud of her father and will appreciate his progression. The Bold And The Beautiful spoilers claim Deacon will meet Sheila, and both will have a conversation. Sheila will express her joy over things turning out for good for both of them. How she is living with a billionaire and how Deacon is fulfilling his dream.

Looks like Deacon will be interested in knowing if Sheila is really doing everything for love or just for personal gains. She may act like she is doing it for both. Later, Sheila will come across Finn, who will deliver a threat to her. He will warn her to stay away from his family. Fans know that this is something that Sheila will never listen to. So, stay tuned to see how things turn out.

The Bold And The Beautiful Spoilers For The Next Week Of January 30-February 3, 2023: Sheila Threatens Katie, Taylor’s Another Crime

Further on The Bold And The Beautiful, Katie will make a bold move. Since she has decided to save Bill from Sheila’s fake relationship trap, she will make a move. The spoilers say that this move is certainly going to scare Katie. Sheila will realize what Katie is up to and will corner her in the next week’s episode. She will make some disturbing threats to Katie, leaving her fear for her future.

Chances are there, she might warn her to mind her own business, or she will make sure that Katie disappears. Whatever the case, Katie might become the number one enemy of Sheila. So, she will need to watch her steps before she makes another move. Elsewhere, Steffy and Finn will continue to make time for each other.

Finally, Taylor will have an important admission to make to Brooke. Since Brooke already knows about the shooting incident, what will Taylor want to confess now? Looks like there will be another cover-up of a crime that might involve Liam this time. Stay tuned and watch The Bold And The Beautiful, it airs every weekday on CBS. For more spoilers and updates, visit our website, TV Season & Spoilers.