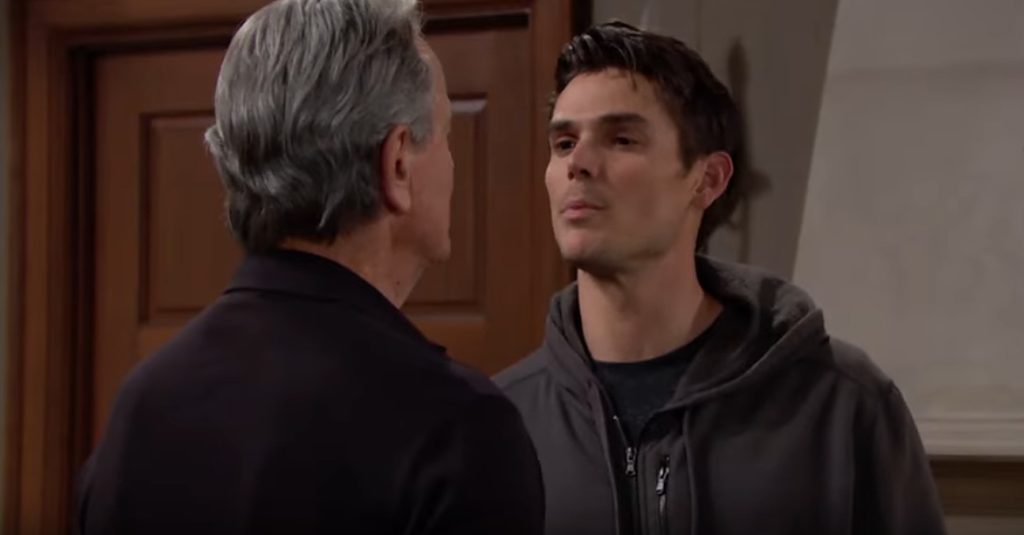 The Young And The Restless, two weekly for August 22 – September 2, 2022, reveal that Victor and Adam will have an argument. He will question Adam’s disloyalty towards his family. Elsewhere, Sharon will help a guilt-driven Nick. As for Chance, he will also regret to go against his work ethic. On the other hand, Kevin will bang on Adam’s door. He will know that Adam has got hold of something. Then over with Chelsea, she might make a bold move on Billy.

Later, during the week of August 29 – September 2, 2022, Chance and Abby might have some problems in their marriage. Over with Nikki, she will make another move towards taking-down Diane’s goal. As for Adam, he might find some dirt on Chance. But what is that? Keep reading to find out what happens in the next two weeks on Y&R.

The Young And The Restless Spoilers For The Week Of August 22-26, 2022: Adam’s Mayhem Upsets Victor

In the week of August 22-26, 2022, Adam will corner Victor. He will tell him that he knows about the whole Ashland cover-up and the face-off with Chance. Hearing this, Victor might lash out at Adam for being disloyal to the family. However, Adam might think that it was he who ignored his loyalty and commitment. Whatever it is, it has crossed Adam’s threshold, and now he will be in a complete mood for revenge. There might even be a subtle threat passed to Victor by his son.

Later, Adam will hire a mystery man named Lucas and assign him to dig for evidence against Victor and probably Chance also. It is teased that Kevin will come on banging at Adam’s door. Looks like, he might finally have dug some dirt on both Victor and Chance.

After a while, Adam might meet with Jack Abbott. Fans might remember that Jack had offered a job to Adam in his company. Regarding that, Adam might accept the offer. However, Kyle might not like him joining the company. He warns Jack not to trust someone who is plotting against his own family. In the meantime, Nate might make another mistake in the business. Devon might again come to sort it out.

Over with Lily, she will pass the ultimatum to Billy. As for Billy, he will decide to focus on his COO position for now. He will ask Chelsea to host her own show without him. But Chelsea will not like it at all. Nevertheless, she will express her thoughts on how much she liked working with him.

Later, Chelsea might even make a bold move toward Billy. She will try to kiss him, even though he will pull away. Chelsea will sense the mixed emotions. She will also know that Billy is giving him mixed signals. As for Billy, he might get excited over the kiss. What does this possible excitement mean? We will know that this week.

Further, The Young And The Restless spoilers claim that Phyllis will close a deal. This might have to do with her working on The Grand Phoenix project. In the meantime, Victoria might as well plan something. It is teased that she will make a bold move to take revenge. However, it is not known if it’s Adam or some new character.

Over with Nick, he will be guilty-driven. He will continue to blame himself for the situation. But Sharon will come to the rescue and will advise him to look after his children instead of worrying about the dead.

Speaking of guilt, Chance will also battle one. He will regret going against his professional ethics as a detective. This might have to do something with Abby asking to trust her family in Ashland’s case. However, fans know that something is definitely going to go wrong down the line. Let’s wait and watch what happens in the coming week.

The Young And The Restless Spoilers For The Week August 29 – September 2, 2022: Chance Mulls Over His Thoughts

Over with Chance, he will think about his recent choices. He will mull over his decision in Ashland’s murder case. However, Abby might get pissed with Chance doubting his decision. Things might escalate, and Abby might lash out at Chance for questioning her family. Nevertheless, this might strain Abby and Chance’s marriage soon.

In the meantime, Adam will finally get dirt on Chance. He will know the efforts Chance might have made to cover up his wife’s family’s crime. It is teased that Lucas and Adam might hack the PCPD system and acquire this information.

However, it looks like Adam is likely to put Chance’s job in danger. Once he exposes the cover-up, Chance might also look like one of the convicts. Will Chance come up with something to fix everything and get back to the case? We will know this week.

Further in The Young And The Restless, Nikki will try to piss Diane. She might have some plan in action. However, it is understandable that nothing serious is to happen, at least not yet. Elsewhere, Allie and Noah will come even closer. And they might even have an intimate moment together.

Over with Sally, she might have an argument with Chelsea. Probability is there that Chelsea might tease Sally with some bitter Adam questions. However, Sally will know how to handle that situation. She might give lash back at her over Billy. The Y&R spoilers tease that the upcoming episodes will be more action-packed. Stay tuned to wait and watch how the storyline for each character unfolds over the course of time. The Young And The Restless airs every Weekdays on CBS. For more information on updates and spoilers, visit our website, TV Season & Spoilers.