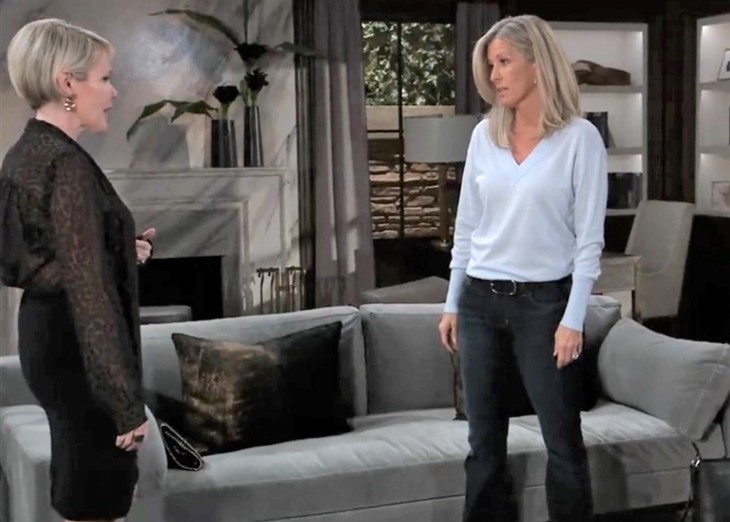 General Hospital Spoilers For December 22, 2022: Carly And Ava PARTY! Esme Has Another Trick Up Her Sleeve

General Hospital spoilers for December 22, 2022, suggest that things have started looking up for a number of GH residents. First, we have Chase, who will have a change of mind and will decide to complete his professional commitments. However, he won’t be so sure about his personal ones. Then, Carly and Ava will feel empowered while Sasha gets emotional. Spencer will also make a promising appeal to Trina, and Esme will have something to gloat about. Did she do something again? Keep reading to find out.

Could Brooke And Chase Reunite?

The Thursday episode of General Hospital relays that Brook will make a desperate plea to Chase. It is possible that she would hope that they could get past their issues and give their romantic relationship another chance. In the recent turn of events, Chase changed his mind and agreed to perform at the Gingerbread Jam.

So, Brook is hopeful that his mind about their relationship will change too. However, it won’t be as easy. While Chase will be Thankful to Brook for getting him another appeal at the civilian complaint review board, he will be focused on completing his professional commitments at the moment.

Then the holiday spirit will take over everyone in Port Charles. Sasha will dress up as an elf and become a part of the celebration. While she is trying to be positive, Donna Corinthos will show up and tell her what she had wished for Sasha. She will be really touched by this.

Not only Sasha but Carly will also get in the festive mood. She will extend an invitation to Ava for a Christmas celebration together. Both these women will sit down and enjoy themselves together. While they’re at it, they will realize that they have come out stronger on the other end of their betrayals, and it will be very empowering.

The Search For The Hook Is On!

Further, General Hospital spoilers suggest that Spencer will show up at Trina’s door in the upcoming episode. He will console her and vow to find Rory’s killer, The Hook. Spencer will make a point that if PCPD cannot find them, he will. Trina will want to help. So, these two will join hands to get to the bottom of the mystery.

as they try to help with the case. It looks like the mystery of The Hook Killer will come to an end soon.

General Hospital: How Is Esme’s Christmas This Year?

Esme will continue being stuck in the North Tower at Wyndemere, getting demotivated by the day. While she will continue trying to plot her escape, it won’t be so easy. Nevertheless, Esme will continue to assure her unborn child about how they’re going to escape. Esme might even get an opportunity where she’ll gloat infront of Nikolas, and that will give her some satisfaction.

In the meantime, her parents will be up to something different. Heather will be in the Spring Ridge with Ryan claiming to have gotten a Christmas gift for him. Ryan will don a red Rudolph nose while Heather claims to have got him something that’ll make him jump. What does she have up her sleeve now? We’ll have to tune in to see.

On a very mysterious note, there will be an unknown person walking on the face of Port Charles in the Thursday episode. The General Hospital spoilers suggest that Dex will know who this person is because he will come to Josslyn’s rescue

. Josslyn will have gone off-road in her car when she meets an accident. Dex will be right there t her rescue.

Thankfully, she won’t endure any serious injuries and will be grateful for Dex. General Hospital really is laying the stones for a romantic relationship between Joss and Dex. How far will all of this go? We’ll know soon. General Hospital airs on ABC all weekdays. Don’t miss the action. In the meantime, Tv Season & Spoilers will update you with all the daily spoilers. Stay tuned