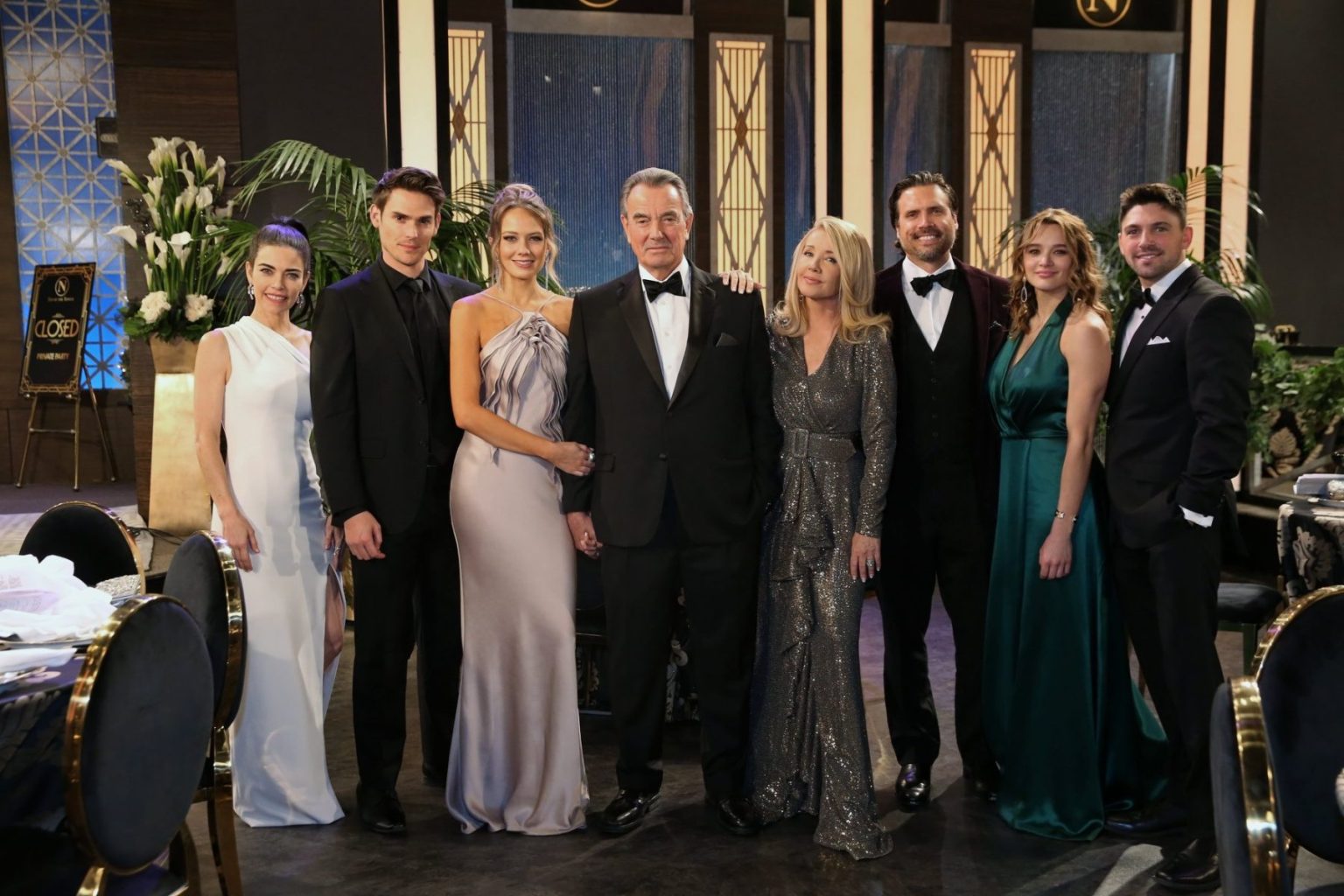 The Young And The Restless: All You Need To Know About The Newman Family

Daily soap The Young and The Restless is daytime Royalty! And ruling the Kingdom of Y&R is the Newman Family. Spanning over several generations, The Newmans have been lighting up our screens and our hearts for decades. As an ode to the fan-favorite family, we present a well-manicured family tree showcasing the Newmans!

The Young And The Restless- Second Generation: Victor Newman

The Patriarch of the Newman Family is the mighty Victor Newman. Portrayed by Veteran actor Eric Braedon. Although Victor has been involved in multiple relationships over time, there are three significant marriages that need to be mentioned.

Nikki Newman: She was Victor’s first wife of significance. They divorced and remarried several times on The Young and The Restless (1984-1988, 2002-2008, 2013-present). The couple together has two children, a son Nicholas and a Daughter, Victoria. The two are very much in love. They have always found their way back to each other despite the upheavals.

Ashley Abbott: She and Victor married twice on Y&R. The first time in 1990, lasting till 1993, and for the second time in 2009, which was very short-lived. The couple together has a daughter named Abby Newman Abbott.

Hope Adams Wilson: She was briefly married to Victor in the year 1994 before moving to Kansas. They have a son named Adam together. He grew up with his mother and later returned to Geona City to reunite with the Newman Family.

The Young And The Restless: Third Generation

The Third Generation of the Newman Family in The Young and The Restless constitutes of Victor’s children and their various spouses. Let us take a look into the second-generation Newmans in a little more detail.

Abby is the daughter of Victor and Ashley. Unfortunately, though, her birth was not a result of romance. Ashley, in an attempt to remain in Victor’s life, has herself artificially inseminated by his sperm that she stole from Robert’s Lab. Abby is currently married to Chance Chancellor. The couple has a son together, Dominic. Due to health complications, the couple opted for childbirth through surrogacy with the help of Devon and Mariah.

The Young And The Restless: Victoria Newman

Victoria is the firstborn daughter of Victor and Nikki. She aspires to be a business mogul like her father and is currently the Co-CEO of Newman Enterprises. The following two marriages stand out among the various relationships she has had on The Young and The Restless.

Billy Abbott: Victoria and Billy married each other twice between 2010-2011 and 2011—2014. She has a son with him, named Johnny. Biologically, Johnny is Billy’s son with Chelsea. Born after Billy cheated on Victoria with Chelsea. Although, later, Victoria forgave him and adopted Johnny as her own. The couple also has a daughter named Katie.

Ashland Locke: Victoria has a rather short-lived but significant marriage with Ashland, lasting 2021-2022. The marriage ended with Ashland’s accidental death, resulting from a scuffle between him, Victoria, and Nick.

The Young And The Restless: Nicholas ‘Nick’ Newman

He is the second-born child of Victor and Nikki. He was conceived in a one-night stand that his parents had while divorced. Nick is often at loggerheads with his father, Victor. He had a long but turbulent relationship with his high school sweetheart, Sharon. Whom he later cheated on with Phyllis.

Sharon Newman: She and Nick were high school sweethearts. They eloped and married each other against their families’ wishes. But their marriage took a hit. Sharon’s daughter Cassie died in an accident. Nick loved her as his own and couldn’t deal with the loss. Sharon and Nick have two other children together, Noah and Faith.

Phyllis Summers: After Cassie’s death, Nick and Sharon’s relationship took a turn for the worse. Leading to Nick seeking Solace in Phyllis’s arms. He later divorced Sharon and wed Phyllis. Together the two have a daughter, Summer Newman.

Adam is a complex character, often labeled as the black sheep of the Newman Clan. He has stirred up a lot of trouble in the lives of Geona city residents. But, he also has a good side that comes to the surface occasionally. Adam is Victor’s son with Hope Adams. She moved to Kansas City after falling out with Victor and took Adam with him. Following are some of his significant relationships.

Sharon Newman: Sharon and Adam were briefly married between 2009-2010. They have had a troubled relationship with each other, but somehow they keep crossing each other’s paths. They are star-crossed lovers, but their romantic stints never end well.

Chelsea Lawson: Chelsea and Adam found comfort in each other while dealing with their extremely troubled life. This brought them together on a personal level, and the relationship progressed to marriage. They tied the knot in 2012 but eventually ended in divorce. Together they have a son Connor Newman.

Sage Warnes: Sage and Adam got married in 2014 for a short duration. They had a very complicated relationship, and their marriage, too, was based on blackmail and deceit. While a year later, the marriage ended in a divorce, the two did have a child together. A son named Christian Newman.

The Young And The Restless: Fourth Generation

These are the newest kids on the block in The Young and The Restless’s Geona City! While not all of them are taking center stage with ongoing storylines. As the story progresses, they all seem to have great potential in the future.

Johnny is the son of Chelsea Lawson and Billy Abbott. He was conceived due to Billy’s extra-marital affair with Chelsea while he was still married to and cheating on Victoria Newman. Later, Victoria adopted him and raised him as her own son.

Katie is the biological daughter of Victoria Newman and Billy Abbott. She was conceived while her parents were separated. Interestingly, at that time, Victoria had intimate relations with Billy and Ben within days of each other. She was initially torn over her baby’s paternity. But later, it was revealed that Billy indeed is Katie’s father.

Noah is the firstborn son of Nick and Sharon Newman. After becoming insecure in her marriage with Nick, Sharon ditched her birth control pills and conceived Noah. He was a premature baby and was at risk of dying in infancy, but he survived.

Faith is the second-born biological daughter of Nick and Sharon. Although, initially, Sharon had lied about her paternity. She claimed that Jack Abbott was the father because she did not want to disrupt Nick’s life with Phyllis. The truth did come out later. Faith survived a near-fatal accident in the recent past and is now off to college.

Cassie was Sharon’s biological daughter. Nick adopted her as her own and loved her all the same. Tragically, Cassie passed away in a car crash, leaving her parents devastated. Nick was especially hit by this loss and spiraled out of control in vengeance. This tragedy took its toll on Sharon and Nick’s marriage, leading to a divorce.

Summer is the biological daughter of Nick and Phyllis. She was conceived out of wedlock. Nick, at that time, was still married to Sharon but was having an extra-marital affair with Phyllis. Initially, there was confusion regarding Summer’s paternity. But tests revealed that Nick was the father, and he duly divorced Sharon and married Phyllis.

Connor is the biological son of Adam Newman and Chelsea. He was conceived right after Adam, and Chelsea resolved their differences after hitting a rough patch. Initially, Dylan McAvoy was believed to be his father, but later it was revealed that Adam indeed is Connor’s dad.

Christian is the son of Adam and Sage Newman. He was born prematurely in Chancellor park and was delivered by Adam. Christian is named after his grandfather Victor’s birth name, Christian Miller.

Well, that’s all for now. We hope this has given you a fair idea of who’s who in the Newman Clan of The Young and The Restless. Stay tuned with TV Season and Spoilers for more such insights! Please share in the comments which are your favorite members of the Newman Family.